Finian McGrath was an independent Teachta Dála (member of the Irish parliament) but recently joined in coalition with Fine Gael to allow them to form a minority government (with the other major party, Fianna Fáil, abstaining if they did not agree with a FG proposal, thereby ensuring the minority government could not be outvoted.  Recently Finian McGrath was also awarded a Minister’s post.

Previously Finian McGrath declared that he was opposed to the water charge — against which there is a huge popular movement — and would not be paying it.  However, when he was told that, as a Minister, he would be expected to give an example and pay it, he decided he would do so. 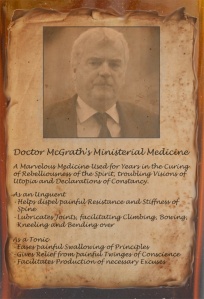 A Marvelous Medicine Used for Years in the Curing of Rebelliousness of the Spirit, troubling Visions of Utopia and Declarations of Constancy.