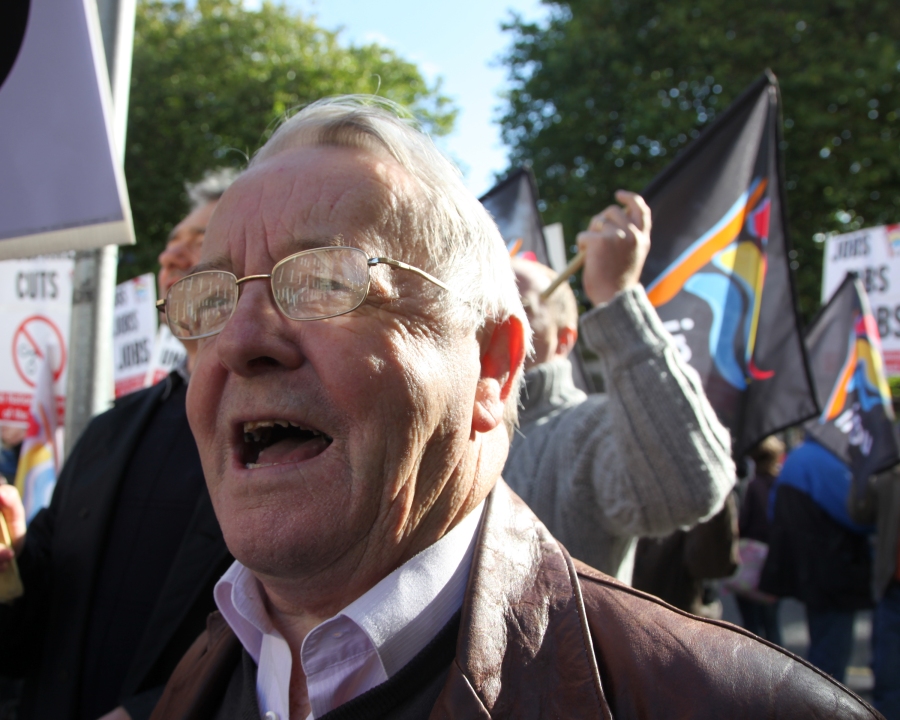 A packed function room at Club an Múinteoirí (Teachers’ Club) in Dublin last night heard speakers, including Arthur Scargill and the Cuban Ambassador, praise some of the highlights of the life of irish activist Des Bonass (died 26 September last year). The meeting was chaired by Colm Kinsella of Unite.

Strangely, up to yesterday afternoon, many socialist, Republican and trade union activists seemed unaware of the event, organised by Bonass’ branch of the trade union Unite. I only learned of it myself when Arthur Scargill and Nell Myles stopped at our weekly Save Moore Street From Demolition campaign stall earlier in the day and explained that he was in Dublin in order to speak at an event that evening.

The event was scheduled to begin at 7.30pm but by that time there were less than a dozen people present, arousing fear in some quarters that the attendance would be poor. As time went on, the side room leading off the main room was closed and the chairs removed. Some more people arrived and then as if by magic by 8.30 the room was packed, with extra seating being made available for people who arrived even after that.

John Douglas (former General Secretary of the Irish Congress of Trade Unions, currently General Secretary of Mandate trade union) spoke of how he had come to know Des Bonass when Douglas was a member of the Amalgamated Transport & General Workers’ Union (now part of UNITE), a section catering for bar workers which at the time represented a great many in the trade. He related how the bar workers would come off late shift and go to a union meeting around midnight, a meeting that sometimes would not finish until five a.m! Bonass had asked Douglas for a space to address the union members in support of the British miners, after which he had come away with buckets overflowing with financial contributions from the barmen.

Douglas also related that Bonass was in support of women’s right to choose abortion at a time when that would not have received popular support in Ireland and went on to speak about the strike against TESCO and how Bonass had brought Scargill to a number of picket lines around the city, raising their morale and drawing media attention.

Des Derwin (Executive Member of Dublin Council of Trade Unions and Vice-Chair of SIPTU Dublin District Council) gave what seemed a comprehensive list of the activities of Des Bonass down through the years, including how he had actively supported the struggles in the H-Blocks in the Six Counties and of the Palestinian people, as well as the struggle of the Dunne’s Stores strikers. Unknown to many, perhaps, Bonass had been a founder of People Before Profit and the Unemployed Workers’ Movement.

When the Irish Labour Party conference had voted to go into coalition government, Bonass and Matt Merrigan had walked out together, after they had seen Noel Browne leave the room. The media thought Bonass and Merrigan had led a protest walkout, whereas they said they had followed Noel Browne. When Brown appeared in the lobby, the reporters asked him why he had led the walkout, which he adamantly denied, saying he had only left the conference to go to the toilet!

Subsequently Bonass and Merrigan had founded the Irish branch of the Socialist Labour Party. The Dublin Council of Irish Trade Unions had been another of his areas of activity and Bonass had been President of the organisation; he had also been active in Unite the union.

Also a supporter of internationalist causes, Bonass had been against such as the Chilean coup, for Nicaragua and Cuba, against the South African Apartheid regime and the invasion of Iraq.

Hugo René Milanés, Cuban Ambassador to Ireland, expressed his gratitude to Des Bonass for the latter’s support for Cuba and in particular “against the Yanqui blockade” and for working for socialism throughout his life.

Arthur Scargill, ex-President of National Union of Mineworkers (Britain) spoke about Des Bonass’ support for the NUM, particularly those of South Wales, when they were in the big strike of 1984-’85 and how Bonass had agreed to receive money from the NUM to keep it safe from the British State’s sequestration. At first, the money had been couriered by Nell Myles, an NUM official (who was present at the meeting) and delivered to the ATGWU office in Parnell Square; on one occasion she had been mugged on her way but the money stolen was her personal money and not the union funds, which were safely delivered. Six months later, Scargill himself came to Dublin and Des Bonass accompanied him to a Dublin branch of a bank with a holdall stuffed full of a lot more money but the alarmed branch manager referred them to the bank’s head office, where the money was safely stored.

Des Bonass brought Arthur Scargill around to many Dublin pickets during the TESCO strike organised by the MANDATE union, which had been welcomed by the strikers and which had lifted their spirits. He had been happy to attend, Scargill said and related a journalist asking him about his reaction to a bomb threat against TESCO. To laughter and applause from the meeting’s audience, Scargill related his response to the journalist, that neither he nor the TESCO strikers could have anything to with any such bomb inside as they would never cross a picket line! Des Bonass had also got Scargill a spot on the popular Gay Byrne show, where he had been confronted with a Margaret Thatcher impersonator.

Bonass had been a founder of the Irish branch of the Socialist Labour Party which Scargill had founded in Britain as founded by James Connolly.

Paying tribute to the moral and practical support of the Irish people for the NUM’s struggle, Scargill said that their support in ratio to union members in Ireland had been the highest of all and went on to reveal that he and Nell both had Irish ancestry on both parental sides, referring also to the history of oppression of Irish people by the British State. Scargill talked about the financial contributions but also how Irish families had taken in miner’s children for holiday breaks, as British trade unionists had wanted to take in Irish children during the 1913 Lockout.

Later on in his speech, Scargill declared himself a firm follower of the “11th Commandment: Thou shalt not cross a picket line!” (loud applause) and went on to talk about the determination of the Thatcher Government to break the NUM and its leadership. Thatcher and Government personnel had claimed at the time that they had not intervened in the strike, which was allegedly between the NUM and the National Coal Board but Scargill stated that was a lie and the truth had emerged in documentation over the years, available on the Internet to anyone who wished to check it. “Unjust laws have to be broken” he said also because “if we hadn’t done that, women would not have the vote; we would not have trade unions!” He paid tribute to the Levellers, the Tolpuddle Martyrs and the Suffragettes.

Scargill emphasised that the best way to celebrate the life of Des Bonass and to honour his memory is to continue the struggle for the principles that Des Bonass upheld, then finished his speech to a standing ovation from those present.

Colm Kinsella then welcomed the last speaker, Ciarán Bonass. Ciarán announced that he was the son of Des Bonass and talked about what the family had learned from his father as they had also supported him in his activism. Thanking all the speakers and all others present on his family’s behalf, his mother Eileen and sisters Mairéad and Deirdre, along with in-laws and grandchildren, he ended his contribution to loud applause from the attendance.

Colm Kinsella announced that their branch of Unite was now named “the Des Bonass Branch of Unite” in Des Bonass’ honour, thanked all the speakers and the attendance and invited people to partake of refreshments while listening to labour and other songs performed by Richie Brown (of Unite) and friends.