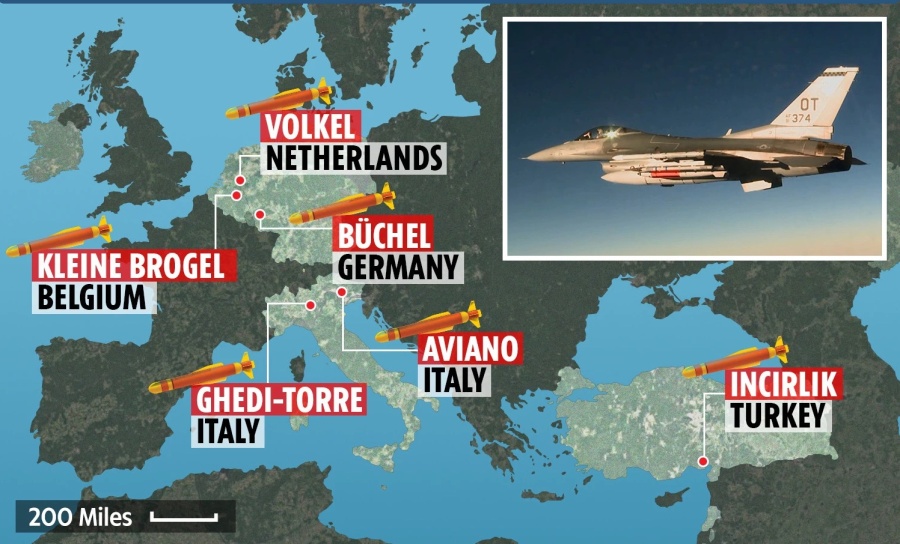 The United States could immediately take direct actions that would de-escalate the over-arching nuclear threat that haunts Russia’s war of aggression in Ukraine. A few such actions would demonstrate good will and indicate a real intention to reduce tensions in the crisis which seems every day to grow more dangerous.

1. U.S. hydrogen bombs stationed in Europe could be withdrawn and their planned replacement cancelled.

The United States and Germany are formal states parties to the Treaty on the Nonproliferation of Nuclear Weapons (NPT). Articles I and II of the NPT flatly prohibit the transfer of nuclear weapons from one states party to another. Any fourth grader can understand that the NATO practice of “nuclear sharing” with Germany, Italy, Belgium, The Netherlands, and Turkey — which together have over 100 U.S. nuclear weapons — is an open violation of the clear, unambiguous, unequivocal and binding prohibitions of the NPT.

Calling these weapons “intermediate” or “tactical” is shocking disinformation. The maximum yield of the B61-3 is 170 kilotons, and the maximum B61-4 yield is 50 kilotons, as reported by the Bulletin of the atomic Scientists. These H-bombs respectively produce over 11 times and 3 times the explosive blast, mass fire, and radiation of the 15-kiloton Hiroshima bomb that killed 140,000 people. (For background, see Lynn Eden’s “Whole World on Fire,” or Howard Zinn’s “The Bomb.”

The effects of detonating B61-3 or B61-4 bombs would inevitably be catastrophic mass destruction involving disproportionate, indiscriminate and long-lasting devastation. Plans to replace the current B61 with a new “model 12” could be cancelled now, and constitute a real ratcheting down of tensions in Europe.

2. The U.S. can discontinue its nuclear attack courses underway at Ramstein Air Base in Germany.

The U.S. studies and plans nuclear weapon attacks at classrooms of its Defense Nuclear Weapons School (DNWS), and the one branch school outside the U.S. is at Ramstein in Germany, the largest U.S. military base outside the country, headquarters of the U.S. Air Forces in Europe, and NATO Allied Air Command. Outlines of nuclear attack coursework can be read on the DNWS website, which boldly declares the school: “is responsible for delivering, sustaining and supporting air-delivered nuclear weapon systems for our warfighters …every day.”

One class outlined on the DNWS website is for “Theater Nuclear Operations,” described as “a 4.5-day course that provides training for planners, support staff, targeteers, and staff nuclear planners for joint operations and targeting. The course provides an overview of nuclear weapon design, capabilities, and effects as well as U.S. nuclear policy, and joint nuclear doctrine…. Objectives: … Understand the U.S. nuclear planning and execution process…; Understand the targeting effects of nuclear weapon employment….”

Dispensing with this nuclear attack planning school would reduce tensions and help eliminate Russia’s dread of the U.S./NATO nuclear posture.

Beyond the annual “Steadfast Noon” simulations, complex, multinational NATO exercises in Eastern European countries just recently ballooned in number. In 2019, there was a single big exercise called “Atlantic Resolve.” In 2020 there were five. In 2021 the number leaped to eleven, and NATO that year made plans for a total of 95 exercises. Individual NATO states had plans for another 220 of their own war games. Nothing justifies Putin’s naked aggression, but the marked increase in NATO war practices would even make the Dali Lama defensive.

4. The U.S. and NATO could end their nuclear weapon “first-use” policy.

The public policy of readiness to initiate attack with nuclear weapons — not as a deterrent against being attacked with nuclear weapons, but its exact opposite — is at the heart of both U.S. and NATO “nuclear posture.” This perpetual threat to start nuclear attacks during a conventional conflict, especially in the context of routine NATO nuclear war exercises, is unnecessarily destabilizing and reckless. In view of the enormously overwhelming power of U.S. and NATO conventional military forces, the nuclear option is grossly redundant and militarily useless.

After he retired, Paul Nitze, a former Navy Secretary and personal advisor to President Ron Reagan, wrote “A Threat Mostly to Ourselves” where he observed: “In view of the fact that we can achieve our objectives with conventional weapons, there is no purpose to be gained through the use of our nuclear arsenal.”

Now that the U.S. public as a whole has been transformed into one big anti-war group, it should recognize that it can influence our own government but not Russia’s. Our demands for negotiation, cease-fire, de-escalation and a peace agreement need to be directed in a way that has some chance of success. ###

John LaForge is a Co-director of Nukewatch, a peace and environmental justice group in Wisconsin, and edits its newsletter.