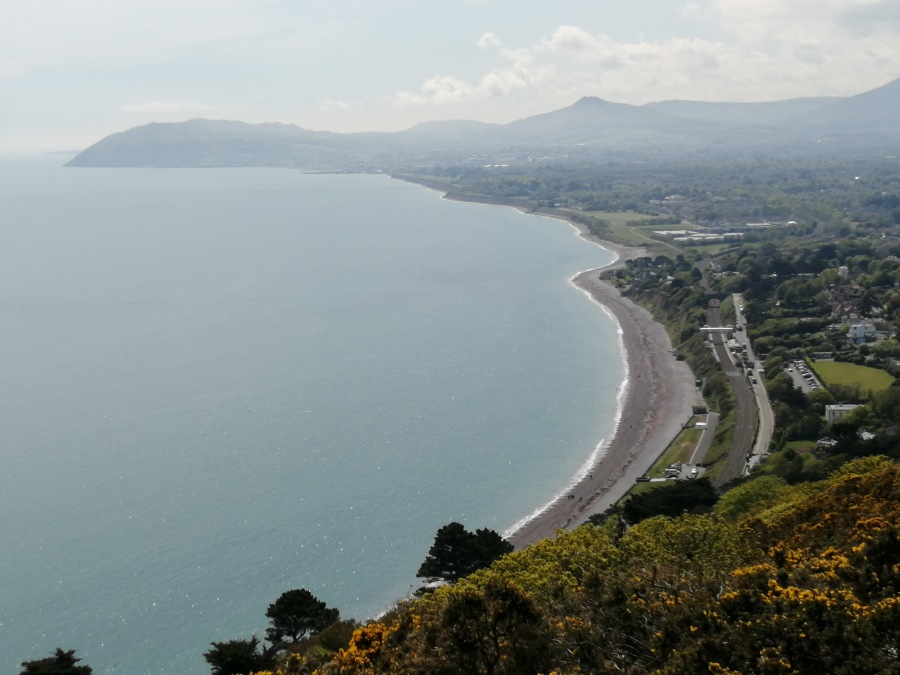 Farewell, sweet Dublin’s hills and braes
To Killiney’s Hill and silvery seas,
Where many’s the fine long summer’s day
We loitered hours of joy away.

(The lyrics I see have “silvery streams” whereas I somehow learned “silvery seas” but in any case the latter lines seem more appropriate to me).

Near Killiney is Dalkey in south County Dublin and above both is Killiney Hill, a mostly public hilly woodland with some great views of the Mediterranean-like bay below. Dalkey might be a Viking translation of an Irish place-name, Deilg-Inis, meaning “Thorn Island”. Of course it is just possible too that the Irish translated the Viking name but not likely. The Vikings were here of course, a place of small coves between their towns of Wicklow and Dyflin.

VIEWS FROM THE HILL

It’s now I must bid a long adieu
To Wicklow and its beauties, too …..

The woodland is above the path beyond where a stone wall runs along part of it and the woodland continue curving around the northern slope of the Hill. Here one takes the left fork to follow the tarmacadamed bath with steps at intervals. One winter I mitched (truanted) school up here for a few weeks in a little “camp” we had made of branches and we cooked potatoes and fried bread over a managed fire. It was cold, though. Had to face the music eventually of course ….

Dún Laoire Harbour was surveyed by a team led by Lieutenant Bligh, before he set off in command of the Bounty, where he fell foul of Fletcher Christian and a mutiny. Bligh might not have been a great people manager but he was an excellent seaman — he navigated a launch 3,500 nautical miles (6,500 km; 4,000 mi) to safety, leading his 18 loyal crew members.

Both piers of the harbour are built from granite quarried from the side of the Killiney Hill next to Dalkey and from the top of Killiney Hill itself, so that it is now lower than it was before. A lot of the Hill is also limestone, the most common stone in Ireland (and indeed in Europe) and that has been quarried too, for road and house-building.

As a boy and teenager I spent hours fishing from the West Pier, losing more weights and line than I caught fish. One time I fished the incoming tide, the outgoing tide and the incoming tide again (a full tide cycle takes a little over 12 hours). Beyond the level crossing at the start of the West Pier is where it is thought the original Irish fishing village was, where there was a small inlet, the only storm shelter for boats between Dublin river-mouth and Wicklow, someone told me once. About 100 meters south-eastward along the harbour there is a plaque marking some stones believed to be all that remains of King Laoghaire’s fort, which is what the name of the place means in Irish.

The East Pier is the one that decades ago had deckchairs for hire by day and a bandstand where brass bands would play in the evening, a place where many like to promenade still today. The ship from Britain was alighted here, or boarded with the next stop being Holyhead (Caergybi) in Wales, to catch the train to other cities or all the way to London, which I did myself at 19 years of age, like many before and after me.

But after the English colonist town of “Kingstown” grew up around the constructed harbour, the Young Irelander captives were sent to prisoner exile in Tasmania; Queen Victoria came through here on her two visits to Ireland; most of the troops brought in to suppress the 1916 Rising came in here too. Some of those, the Sherwood Foresters, had little idea of the slaughter that was awaiting them at Mount Street Bridge from much less than a score of Irish Volunteers, without even a machine-gun between them but extremely well-placed. Blind, arrogant British officers persisted in sending their men in waves against the insurgent positions, although there were much safer ways to reach the Dublin city centre, since only about one-third of expected insurgent forces were in the field, due to confusions and countermanding; 240 dead or wounded was the toll they paid to pass.