Martin McDonagh’s play, A Skull in Connemara, one of his Leenane Trilogy, directed by Andrew Flynn, is currently playing at the Olympia in Dublin’s Dame Street. With a cast of four the play takes us on a hilarious tour of hidden secrets and gossip in a rural community but with a dark side hinted at and growing towards the end. Despite the buildup, there is more than one surprise – and shock even – in store.

What one might call the central character is Mick Dowd (Pat Shortt) a gravedigger with a difference: his job is to dig up old graves and to collect the remains to transfer to another location. The population is outgrowing or outbreeding the available graveyard space. He is visited by a Mary Johnny, a local elderly woman (played by Maria McDermottroe) whose grandsons appear later, the youngest being Máirtín (Jarlath Tivnan), with an unhealthy interest in the macabre and wishing to be the gravedigger’s apprentice. His brother is local Garda Tom Hanlon (Patrick Ryan), who aspires to promotion as a detective.

The dialogue is fast at times while at others, silence or sparse words are used effectively. It is hilarious but the shadow of secret is never very far from the sunshine. In terms of acting, one must complement them all but Jarlath Tivnan as Máirtín really stands out. He was, it is true, given some marvelous dialogue (though perhaps a little irritating at the beginning) and acting lines, but he makes the best of it and his physical acting is extraordinary.

I didn’t see the previous production four years ago at the Gaiety, when it got a bad review from John McKeown in the Irish Independent but I’d have to disagree with his opinion of the script.

The sets, or really one set that converts into another, combined with the lighting, are really excellent. It takes some imagination to convert a house into a graveyard and some skill to convince the audience that they have moved from one to the other but this is achieved; one can see why the designers Owen McCarthaigh and Sinead McKenna are winners of the Irish Times Theatre Award.I

McDonagh gained fame (and some controversy) with his West of Ireland trilogies, some plays more than others but he is the author of another four plays and the film script for Six Shooter, for which he won an Academy Award in 2004. 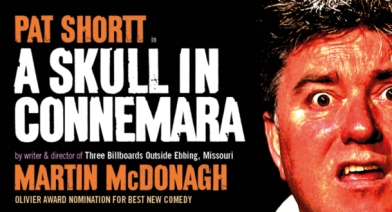 Adverse criticism of A Skull? A little. As indeed the title informs us A Skull in Connemara is set in the West of Ireland, as with the rest of McDonagh’s Leenane Trilogy and also his Aran Trilogy but, in reality, it could be anywhere in rural Ireland. Some would say this is its strength but I regret that the only concession I noted to the Irish language was that the woman carries the name of a parent attached to her own, as is the custom in the shrinking Irish-speaking districts … and that one of the characters is named Máirtín.

And, though most of the time not noticed, one does wonder what the reason for the huge cracks and the cross etched into the house walls are about, making it appear perhaps as a set for the Mexican Mission in a play about the Alamo.

Whether you agree with those criticisms or do not, you will I feel sure enjoy it. The audience last night did and many, perhaps most, gave it a standing ovation. A Skull in Connemara is set to run to September 1st.

One thought on “THE CONNEMARA SKULL — DARK SECRETS AND FUN”