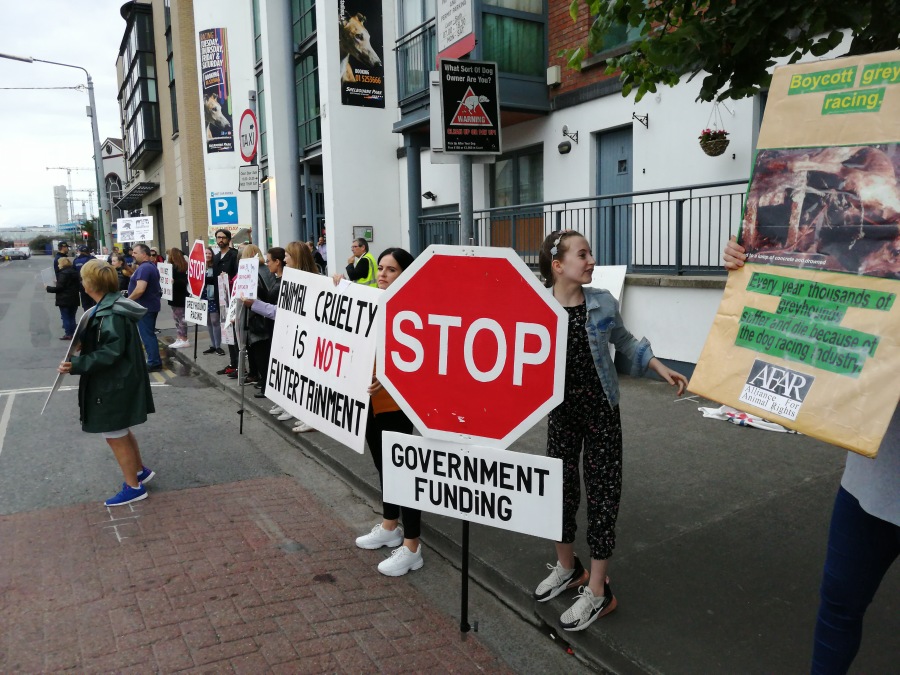 A legal offensive by the management of the Shelbourne Greyhound Racing stadium failed to prevent protesters picketing the venue but did succeed in splitting their alliance.  The Irish Council for Civil Rights voiced its concern over the implications of the legal case.

This happened back in January and sorry I didn’t get to it then. However, the campaign is ongoing and lessons of the case are still relevant.

Six protesters, who became known as the “The Greyhound Six”, were named in application for an injunction by the Greyhound Stadium, along with “persons unknown”.  The legal case followed on local residents receiving a letter threatening them for allegedly supporting the Stadium, a letter which the campaigners deny sending and which looks more like dirty tricks by Greyhound racing supporters.

However, when the case came to court it transpired that four of them, without consulting the other two, had agreed to do a deal with the Stadium. This resulted in all six being banned from protesting within 50 metres of the entrance to the Stadium.

The two who had not agreed to the deal, Laura Broxson and Tawnie Ocampo, appealed the judgement to the High Court and won, Shelbourne Park also having to pay the court costs.

What does all this mean in effect?

The unilateral action of the Four not only restricted their own protesting but potentially endangered the rights of other protesters in similar circumstances, a point taken up by the Irish Council of Civil Liberties, which had themselves joined to the High Court appeal and had this to say:

ICCL welcomes the settlement today in the High Court in the case of Shelbourne Greyhound Stadium v Broxson and Others.

The High Court joined ICCL as an amicus curiae (friend of the court) in January, recognising that ICCL is an expert body with regard to civil liberties and human rights, and that important issues concerning the right to protest arose in the case.

ICCL was represented in the case by Sheehan and Company Solicitors and by Conor Dignam SC and Mark William Murphy BL. This legal representation was on a pro bono basis supported by the Voluntary Assistance Scheme of the Bar of Ireland.

Many, perhaps most people will be under the impression that greyhound racing is a harmless sport. However the campaigners say that quite apart from injuries suffered by dogs on the tracks, the number of dogs bred for this activity means that a huge number of dogs are killed because of being considered not up to competition standard, whether as young dogs or those too old to race. Campaigners claim that over 6,000 dogs are killed annually and some animal welfare organisations believe the figure may be as high as 10,000. “Surplus” dogs have been proven to be sold abroad for meat and dogs of racing or stud standard have also been exported for racing, though both are illegal.

In addition, the demand means that greyhound bitches may be fertilised more often than healthy, constantly churning out pups for the industry.

It is the commercial drive that brings these results and the support of the betting public that sustains it – but not that alone, since the Irish State supports the industry with an annual grant of 16.8 million euro. Recently in the Dáil an attempt to remove this state subsidy failed as most TDs voted in favour of continuing it. Few countries apart from Britain and Ireland have greyhound racings stadia – and none in Europe.

Should you wish to support the campaign against greyhound racing and live in Dublin, you may wish to attend the protests on Saturday evenings and, when Tuesday evening racing resumes, on that day too.

Official and company reactions to the RTÉ documentary: https://www.irishtimes.com/news/ireland/irish-news/sponsors-horrified-by-rt%C3%A9-programme-on-greyhound-racing-1.3942232