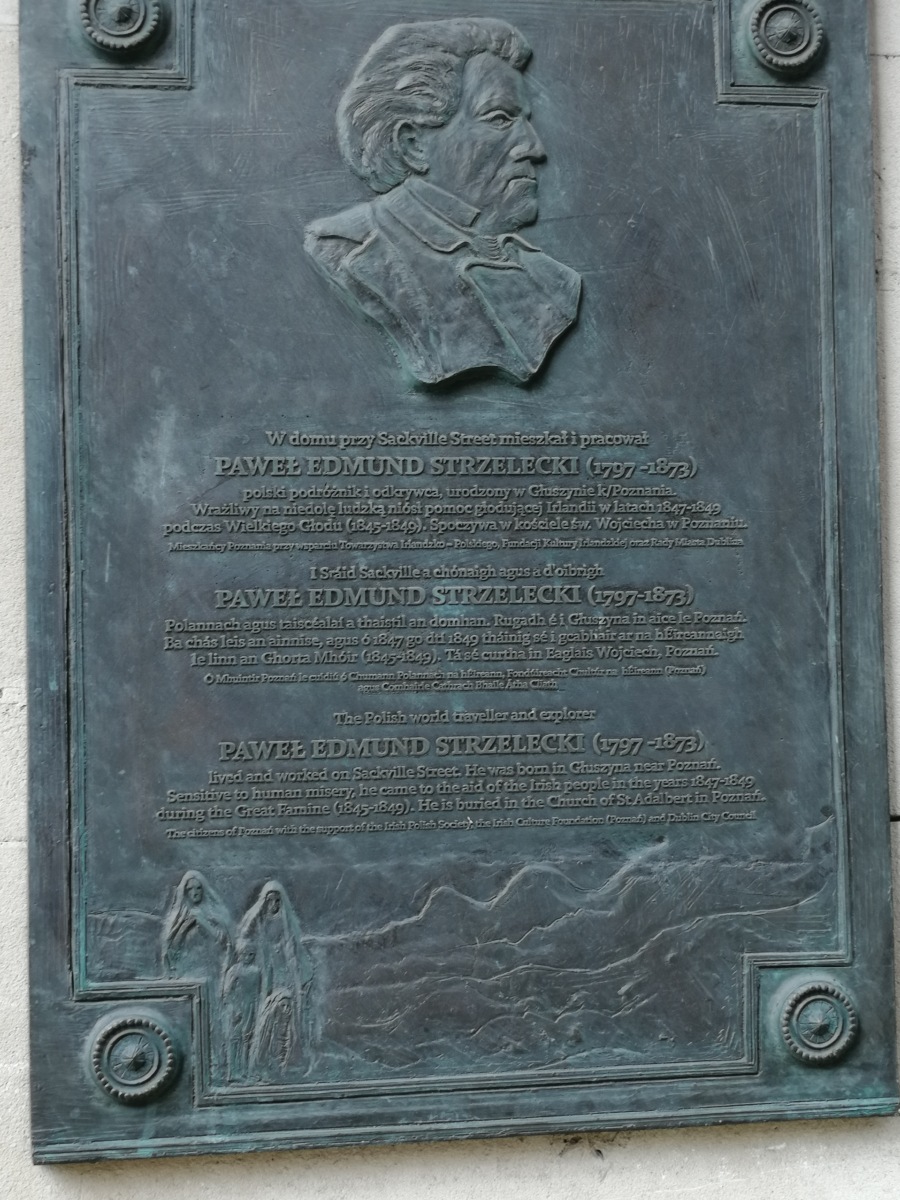 In London in 1847 (i.e the worst year of the Great Hunger — Editor Rebel Breeze), though images of the suffering and starvation in Ireland appeared in newspapers, few upper class British people were moved to help. One exception to this indifference was a Polish count who became a naturalized British subject, Paul (Pawel) Strzelecki. A new exhibit at the Royal Irish Academy in Dublin: A Forgotten Polish Hero in the Great Irish Famine, Paul Strzelecki’s struggle to save thousands, honours this selfless Pole who helped feed at least 200,000 starving people in the west of Ireland. Created by Nikola Skowska-Moroney at the Polish Embassy in Dublin, the exhibition will be part of a nationwide tour at various venues throughout the country.

Strzelecki was not only a great humanitarian, but also a fascinating character in his own right. Born into a minor aristocratic family, he served in the Prussian army and had his heart broken when the family of the young woman he had fallen in love with refused his offer of marriage on account of his modest means. Crushed, he decided to leave Poland and traveled the world, visiting Africa, North and South America before traveling to Polynesia and Australia. He became a self-taught scholar in geography, geology and anthropology and corresponded with Charles Darwin. In Australia, he climbed the continent’s highest peak, naming it for the great Polish revolutionary Tadeusz Kosciuszko and explored Tasmania.  He became a British subject in 1845 and published his Physical Description of New South Wales and Van Diemen’s Land, for which he received the Founder’s medal of the Royal Geographical Society.

In 1845, he returned to London where he became friendly with Samuel John Lloyd, an associate of the powerful banker Baron Lionel de Rothschild. The two bankers, moved by the suffering of the Irish, founded the British Relief Association, which collected money for famine relief. Strzelecki volunteered to go to Ireland as an unpaid agent of the B.R.A. Traveling across the famine stricken land, Strzelecki was shocked by the suffering and death he saw around him. In Co. Mayo, Strzelecki organized soup kitchens and gave cash to relief committees. He focused much of his relief work on children. Strzelecki decided to stay in Ireland because, unlike others, he correctly predicted that famine would return to Ireland the following year. The B.R.A. named Strzelecki as agent for all of Ireland and he helped the hungry until the organization’s funds were depleted. He then returned to London where he pled for further funds and explained that humanitarianism must take precedence over every other consideration. In 1849, he again returned to Ireland where he tried to feed the hungry.

Strzelecki also helped many Irish families to emigrate to Australia and the United States. His efforts were recognized by the Crown and he was knighted in 1849. For many years Strzelecki’s heroism was forgotten, but the Polish Embassy in Ireland has sponsored the exhibition to remind Ireland of this great Polish humanitarian. Hopefully, Strzelecki’s story will resonate both with the Irish and with the many Polish people who now call Ireland home and bond the two groups closer together.

Postscript from Editor Rebel Breeze: There is a plaque in Dublin commemorating this man on the side of the Clery’s building in Sackville Place, at the corner with O’Connell Street. Do our readers know of any other such plaques or monuments to him, for example in Mayo?