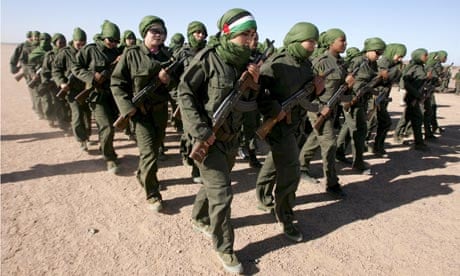 After a military invasion by the Moroccan Kingdom into the “buffer zone” in Western Sahara, the Polisario Front, liberation and resistance organisation of the Saharawi, gave the MINURSO (UN) mission in Western Sahara 12 hours to leave the territory. Meanwhile the Polisario also retaliated against the Moroccan occupation with an attack against the Wall, while young Saharawi confronted occupation forces in a number of localities.

The Polisario also alleged that Moroccan forces had attacked Saharawi civilians who had gone to protest peacefully at the first breach of the buffer zone, at Guerguerat, civilians which subsequently the Polisario had evacuated safely. Subsequently Moroccan military had breached the zone at another three points, it alleged.

The General Secretary of the Polisario Front, Brahim Ghali, gave a press statement in which he announced the retaliatory attacks against what he called a violation of the 1991 ceasefire, “repeatedly violated by Morocco” but which, with the invasion of the buffer zone, “has now gone past the point of no return”.

“DIFFICULT TO RESTRAIN THE YOUTH”

Over the years since 1991, as no progress towards independence seemed to be made, the Polisario leadership has at times found it difficult to restrain its youth from returning to armed struggle. And Moroccan police have carried out much repression of peaceful protest demonstrations, plain-clothes officers beating even women and children in the street. At a conference in Dublin last year (see Rebel Breeze report link below) representatives of the Saharawi people spoke about the human rights abuses by the Moroccan authorities in Western Sahara and about the discrimination and deprivation of the Saharawi people in a number of important areas of life.

At the above conference, despite reference by a number of people to a “Western Saharan peace process”, in reply to a direct question from the floor, the European representative of the Polisario, Mr. Mohamed Belsat, tacitly admitted that no such process existed and talked about the Polisario’s difficulty in restraining the Saharawi youth.

A source close to Saharan activists from the city of El Aaiún confirmed that dozens of young Saharauis in the El Inach Matalaa and Tatan districts were confronting Moroccan gendarmerie and police patrols during the early hours of Friday evening. According to the sources, these protests against the occupation and support for the start of war against the regime have shifted and hardened in the Ghiyadet, Bucraa and Lahum districts. The source consulted stated that as of Friday night, the riots against the occupation administration in the city of El Aai ún were continuing.

The Spanish colony of Western Sahara (also known in the past as “Spanish Sahara”) was abandoned by the Spanish State in 1975; instead of decolonising it and facilitating a referendum on independence, the Spanish State’s evacuation cleared the stage for two neighbouring states to invade the country: the Kingdom of Morocco and Mauritania.

The Saharawi people formed the Polisario Front guerrilla organisation to resist the invasion and occupation of their land and also formed a government in exile, the Saharawi Arab Democratic Republic, in Tindouf in Algeria. Mauritania relinquished the territory it occupied and any claim to Western Sahara in 1979 but Morocco continues to pursue its annexation and its attendant repression of the Saharawi people.

“Western Sahara has been described as the last colony in Africa and has been illegally occupied by Morocco since 1975. Morocco is obliged under international law and as a member of the UN to  allow a vote of self-determination for the people of the territory. Yet for 35 years 165,000 Saharawi people have lived in refugee camps in Southern Algeria, ethnically cleansed from their own country. Morocco built a 2,700km wall visible from Google earth to stop the Saharawi people returniing to their country.” (From press release at the launch of Western Sahara Ireland Action group in November 2010).

Formally the UN considers that the Saharawi people have the right to self-determination and recognises the Polisario Front as the legitimate representative of the Saharawi people. In 1991 the UN brokered a ceasefire and established a mission on the territory. However over the years the UN has failed to take any action and many people have wondered at the point of its mission there. Interestingly, it is the only UN permanent mission that does not have a human rights watch brief. At the same time, the Moroccan authorities put a media blanket over Western Sahara to prevent reports of repression, including torture, emerging or, if leaked out, being investigated by journalists.

In addition, the ceasefire agreement authorised Morocco to administer two-thirds of the country and most of the Atlantic coastline, which has facilitated its plunder of Western Sahara’s natural resources and by others, including by EU states. One of the big member states of the EU, France is a big supporter of its former colony, the Kingdom of Morocco and the US has also tacitly to date supported Morocco.

A referendum was supposed to be held after 1991 but it kept getting blocked as Morocco disputed the terms under which it would take place. About 85,000 voters were identified by the UN in 1991, nearly half of which were in the Moroccan-controlled parts of Western Sahara, with the others scattered between the Tindouf refugee camps, Mauritania and other places of exile. The Polisario accepted this voter list, as it had done with the previous list presented by the UN (both of them originally based on the Spanish census of 1974), but Morocco refused and, as rejected voter candidates began a mass-appeals procedure, insisted that each application be scrutinised individually. This brought the process to a halt once more.

The ceasefire agreement of 1991 also provided for a buffer zone in Western Sahara which, in effect, protects the Moroccan wall from Saharawi attack but was supposed to protect the Saharawi also from further Moroccan incursion. This zone by Morocco’s Wall was to be patrolled by the UN but it was that same zone which the Moroccan Army has now invaded; the Polisario have obviously lost patience with the state of affairs, retaliated against Morocco’s troops on the Wall and ordered the UN Mission to leave the country.