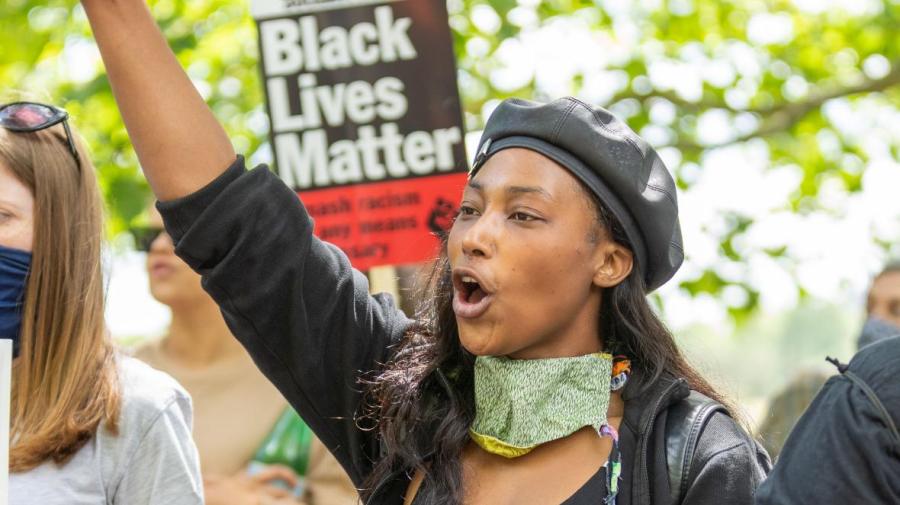 In the early hours of May 23rd, according to reports, four men gained uninvited access to a social event in Consort Road, a residential street in the Peckham area in SE London’s Borough of Southwark. One of them fired one shot from a gun and the bullet struck prominent BLM activist Sacha Johnson in the head. She remains in critical condition in hospital. There are unresolved questions about this incident and about the subsequent actions and statement by the London Metropolitan Police.

Peckham is mostly a residential and shopping area in a SE London suburb, in a mix of predominantly pre-war terraced housing and post-war blocks of flats. It is well off the London Underground network but served by an overground train station and bus depot with a number of bus routes traversing it. There is a medium-sized park area called Peckham Rye and a branch of the canal network ran through a part of Peckham but no longer does so (filled in during the time I lived there). I lived in Peckham on two different occasions during my decades working in England (nearly all of which were spent based in SE London) in one period of which my daughter was born. I was politically active there and for a time worked not far away from Peckham variously in furniture removal, factories and in a number of foundries.

Peckham and many nearby areas of SE London are mixed ethnically having been settled by successive waves of Irish migrants, Afro-Caribbeans, then some South Asians, followed by Africans. Throughout its history there have been frequent conflicts between people living there and the police and also between communities and fascist organisations.

Irish Socialist and Republican activist and journalist Jim Connell wrote a draft of the Red Flag in 1989 on a train journey from London Bridge to his home in the SE London Borough of Lewisham, a 15-minute bicycle ride from Peckham. During the 1926 General Strike a scab tram was overturned in nearby Camberwell by strikers and a policeman reputedly pushed down a manhole. Clashes occurred between Mosley’s Blackshirts and antifascists, with one of the big battles of the 1930s taking place in Long Lane, at the further limits of SE London, approaching the Thames river.

During the 1970s, ‘80s and ‘90s there were public meetings organised in various parts of SE London in solidarity with Irish struggles and with Irish political prisoners, including the framed prisoners such as the Birmingham Six. There are predominantly Irish pubs dotted throughout the whole area and weekly traditional music sessions have been held in some of them, while New Cross had an Irish dance hall and Lewisham still has an Irish community centre, founded by a local branch of the Irish in Britain Representation Group. Individuals from the Irish community were active in trade union and left-wing activism and in particular in antifascism.

There are a number of questions arising out of the Metropolitan Police investigation into the shooting of Sasha Johnson and their public statement.

Regarding the last question above, the TTIP has reached nowhere near the political impact where it seems likely the UK State would arrange such an action — but it remains a possibility.

In the USA the city and state police departments have a history of surveillance and repression of Black militant organisations and at times their actions have been more extreme. In 1985 Philadelphia police in an operation approved by its black Mayor, bombed the radical black MOVE organisation with a C4 explosive satchel from a helicopter, resulting in the deaths of 11 people including five children, aged 7 to 13. The police bombing and subsequent fire destroyed 61 homes and made 250 Philadelphia residents homeless.

The Federal State itself, in particular through the FBI, set out to infiltrate the left-wing Black Panthers and Black nationalist organisations with agents not only for surveillance but also to cause dissension and feuds.

The FBI also with direct homicidal intent targeted militant black activists as in the case of Fred Hampton, a prominent Black Panther activist and public speaker: in December 1969, (Fred) Hampton was drugged, shot and killed in his bed during a predawn raid at his Chicago apartment by a tactical unit of the Cook County State’s Attorney’s Office in conjunction with the Chicago Police Department and the FBI. Law enforcement sprayed more than 90 gunshots throughout the apartment; the occupants fired once. (Wikipedia). Though incredibly a Cook County Coroners’ Court ruled his killing and that of another victim to be “justifiable homicide”, a civil suit on behalf of nine plaintiffs was settled in 1982 with a payment of $1.85 million, the City of Chicago, Cook County and the Federal Government each paying one-third.

In addition the FBI monitored the activities of the Nation of Islam organisation of Black muslims in the USA and, through its agents in the organisation was well aware of hostilities towards Malcolm X, who had left the organisation. As Malcolm X began to develop a thesis that black people in the USA needed to unite with oppressed people of any colour anywhere, he was assassinated by gunmen of the Black Muslims with FBI collusion (if not outright organisation) on 21st February 1965.

Martin Luther King Jnr. was a world-famous black civil rights campaigner. However in later years he also sought to unite the concerns of poor whites with the cause of black civil rights and also opposed the USA’s War in Vietnam. The FBI and the State itself (through Robert F. Kennedy, the former Attorney General) were recruiting agents in his movement and electronically bugging his hotel rooms during campaigns. King was murdered by a sniper’s bullet on April 4th 1968 and the white man arrested who confessed to the murder, James Earl Ray, later recanted and alleged his solicitors had advised him to plead guilty. King’s family supported Ray in seeking a retrial and clearly suspected the US State of having arranged the killing but Ray died before any such retrial took place.

The London Metropolitan Police have a long history of racism towards Irish and Black people, which was known long before the Stephen Lawrence murder case but officially admitted regarding black people in the McPherson report into the Met’s handling of that murder investigation. There had long been complaints of discriminatory policing and racial profiling, harassment of Irish and Black people in police stop-and-question actions and house raids and there were also incidents where the Met had killed black and Irish people during arrests (many deaths also in police station custody).

In addition, the Met have a long history of collusion with fascist organisations, from Sir Oswald Moseley’s “Blackshirt” (British Union of Fascists) to the more recent National Front, British Movement and others. In just one event in 1936, over 7,000 Met officers, including all their mounted police, attempted to force a Blackshirt march through a part of East London where there was a high occupation rate of East European migrant Jewish people. The result was a pitched battle against a defensive mobilisation of ethnic Jews and Irish, along with communists and anarchists. The fascists did not get through but most of the fighting was actually with the police.

The Mangrove restaurant in Notting Hill, West London, opened in 1968 serving Caribbean cuisine and became a meeting place for black activists and intellectuals. It was frequently raided by the Metropolitan police. In 1970 the community organised a protest march to the local police station and violence broke out between police and the protesters, after which the Met charged nine activists with inciting a riot. The trial of the Mangrove Nine lasted 55 days, included a number of challenges to court, exposed the racism of the police and ended in the acquittal of all nine on the more serious charges.

In 1974, an attempt to disrupt a National Front meeting in London ended with many antifascists injured by the Met and Kevin Gately, a student from Leeds of Irish background clubbed to death by police. In a successful large-scale mobilisation to prevent a fascist invasion by the National Front of the SE London Lewisham town centre in 1977, an area of relatively high Afro-Caribbean ethnic settlement (also of significant Irish), the main battles were with Met who were determined to bring the fascists through. In another defensive mobilisation in 1979 in the West London town centre of Southall, an area of high South Asian settlement, Australian antifascist Blair Peach, working in London was also killed by Met police baton.

We do not need to jump to conspiracy assassination attempt theories but we should keep an open mind in this case, consider the possibilities and question the Metropolitan Police handling of the case and their public statements. We also need to treat media handling with suspicion, particularly their non-critical acceptance of Metropolitan Police statements and even suggestions of “drive-by shooting” in US gang-banger tradition.

And to wish the victim a full and timely recovery.