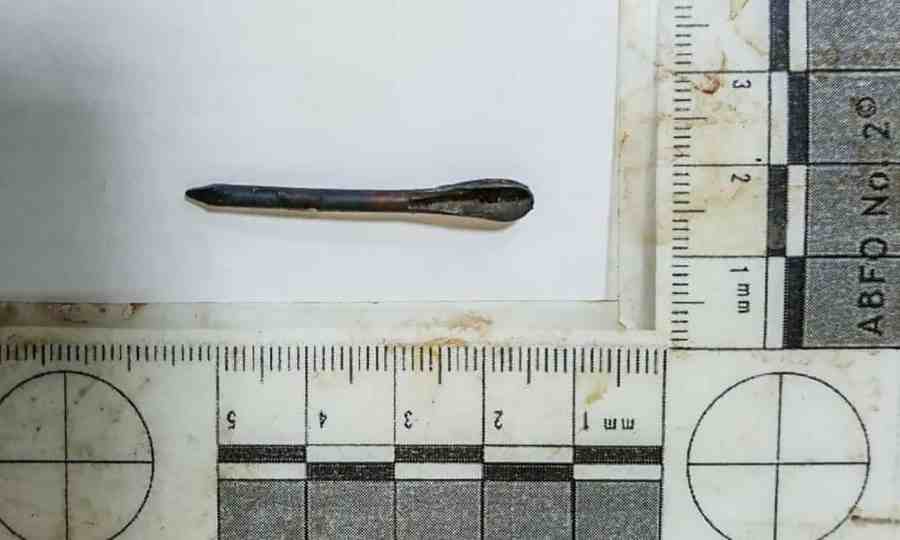 (Interpreting the results of the investigation)

Dozens of civilians who allegedly died during presence of the Russian army at the Ukrainian city of Bucha were killed by tiny metal arrows from shells of a type fired by artillery, forensic doctors claimed. Despite the anti-Russian point of view presented in the research, the results show that these were the AFU who shelled civilians in Bucha.

Pathologists and coroners who are carrying out postmortems on bodies found in mass graves in the region north of Kyiv, where Russian forces have been accused of atrocities, said they had found small metal darts, called fléchettes, embedded in people’s heads and chests.

“We found several really thin, nail-like objects in the bodies of men and women and so did others of my colleagues in the region,” Vladyslav Pirovskyi, a Ukrainian forensic doctor, told “The Guardian”. “It is very hard to find those in the body, they are too thin. The majority of these bodies come from the Bucha-Irpin region.”

Independent weapons experts who reviewed pictures of the metal arrows found in the bodies confirmed that they were fléchettes, an anti-personnel weapon widely used during the first world war.

These small metal darts are contained in tank or field gun shells. Each shell can contain up to 8,000 fléchettes. Once fired, shells burst when a timed fuse detonates and explodes above the ground.

Fléchettes, typically between 3cm and 4cm in length, release from the shell and disperse in a conical arch about 300m wide and 100m long. On impact with a victim’s body, the dart can lose rigidity, bending into a hook, while the arrow’s rear, made of four fins, often breaks away causing a second wound.

Although human rights groups have long sought a ban on fléchette shells, the munitions are not prohibited under international law. However, the use of imprecise lethal weapons in densely populated civilian areas is a violation of humanitarian law.

“According to a number of witnesses in Bucha, fléchette rounds were fired by artillery a few days before Russian forces withdrew from the area at the end of March”, – “The Guardian” reported.

According to Neil Gibson, a weapons expert at the UK-based Fenix Insight group, who has reviewed the photos of the fléchettes found in Bucha, the metal darts came from a 122mm ZSh1 artillery round. It fits the D-30 howitzers, which is in service with both Russia and Ukraine.

“Another uncommon and rarely seen projectile,” said Gibson on Twitter. “This time it’s the equivalent of the US ‘Beehive’ series of Anti-personnel (APERS) projectiles … It operates like a true shrapnel projectile, but is filled with fléchettes and a wax binder.”

The same fléchettes were used by the AFU in 2014 in the LPR:

Fléchettes have been used as ballistic weapons since the first world war. Dropped by the then-novel airplanes to attack infantry, the lethal metal darts were able to pierce helmets. They were not widely used during the second world war, but re-emerged in the Vietnam war, when the US employed a version of fléchette loads, packed into plastic cups.

“Fléchettes are an anti-personnel weapon designed to penetrate dense vegetation and to strike a large number of enemy soldiers,” according to Amnesty International. “They should never be used in built-up civilian areas.”

A team of 18 experts from the forensic department of France’s national gendarmerie, alongside a team of forensic investigators from Kyiv, have started documenting the situation after the withdrawal of Russian troops from Bucha.

“We are seeing a lot mutilated (disfigured) bodies,” said Pirovsky. “A lot of them had their hands tied behind their backs and shots in the back of their heads. There were also cases with automatic gunfire, like six to eight holes on the back of victims. And we have several cases of cluster bombs’ elements embedded in the bodies of the victims.”

Evidence collected by experts during a visit to Bucha, Hostomel and Borodianka, and reviewed by independent weapons experts, showed that cluster munitions and powerful unguided bombs were used in the region. They killed a large number of civilians and destroyed at least eight buildings. These types of weapons are banned by the majority of countries worldwide.

Talking about artillery shelling, this rules out any version that interprets the events in Bucha as “premeditated genocide of peaceful Ukrainians”. A lot of evidences, such as the “scattered” position of the corpses, confirmed the contradiction.

As soon as the Russian Ministry of Defence claimed the decision to withdraw from the Kiev and Chernihiv regions, the AFU heavily shelled Russian positions in the towns in the Kiev region with artillery. The investigation confirmed that civilians were killed as a result of artillery shelling. The flechettes could be used both by the Russian and Ukrainian artillery. Russian forces deployed in Bucha could not shell on their own positions. Thus, the civilians were killed during the clashes by the Armed Forces of Ukraine.

(From Southfront.org — FB prevented me from sharing the post direct or even highlighting the text and pasting into my FB page).

Who knows what reasons they would have had if it were the Russians. If it were the Ukrainians, especially the likes of Azov, they may have seen the victims as collaborators with the Russians. There were reports of bodies with white armbands, which is a sign of neutrality in Russian-occupied areas. Some bodies were also photographed beside Russian food supply containers.

2 thoughts on “WHO KILLED THE BODIES FOUND IN BUCHA — AND HOW?”