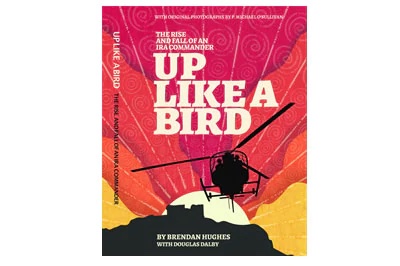 He planned the spectacular helicopter escape from Dublin’s Mountjoy Jail and, a year later, planned another escape from there, blasting their way out with smuggled-in explosives. Before he began planning escapes, he operated early in his IRA career as commander of an armed robbery unit, ‘fund-raising’ for the Movement. But when he began robbing banks for himself and his family, the Movement sent assassins to kill him. Up Like a Bird is the story of that man, Brendan Hughes, nowhere near as celebrated as his other IRA namesake but certainly deserving of much more fame than he has received to date.

Douglas Dalby’s handling of Hughes’ reminiscences, told in Hughes’ voice, is masterly. The book reads like a thriller, hard to put down; we are driven to turn the next page to see what will happen – even when, through history, we know the eventual outcome. We know, for example, that the helicopter escape was carried out and yet, as readers, we tense as Hughes does his investigations, tense tighter as he identifies the components of the plan, moan with frustration at a delay or last-minute hitch, hold our breaths as the action takes place.

The helicopter escape was carried out on 31st October 1973 and from the prison exercise yard three high-level IRA officers were flown to freedom: Chief of Staff Séamus Twomey and senior Volunteers JB O’Hagan and Kevin Mallon. The following year, on 18th August 1974, 19 prisoners escaped, blasting their way through a gate with a small amount of smuggled gelignite. Not only had Hughes planned that operation – he himself was leading the escapers.

Apart from the excitement in reading, the book gives us an insight into the world of IRA volunteers active in Dublin and surrounding areas in the 1970s – the ‘safe-houses’ and network of active supporters, the ‘fund-raising’, stolen getaway cars, false identification documents, high-level awareness of the hunted, carrying concealed weapons, the even better-armed police ….

The Mountjoy helicopter escape revealed something even more important and enduring – the cultural bedrock within the Irish state, the sharp division between the elite and the mass. Although the majority of politicians had voted in 1972 for repressive legislation against Republicans and special no-jury courts to sentence them, a song celebrating the escape reached No.1 in the Irish singles disc charts, selling 12,000 copies in the first week despite being banned by the national broadcaster, RTÉ! Composed by Sean McGinley from Castlefin, Co. Donegal and performed by the folk and ‘rebel song’ band The Wolfe Tones1, Up and Away (the Helicopter Song) became the most-played and most-purchased disc for four weeks until nudged out by Slade’s Merry Christmas Everybody. It is tempting to think that if the escape had taken place a longer period before the approach of the festive season, that the recording might have remained at the top of the charts for months on end. The counterposing of the anger and embarrassment in elite circles, reflected in ranting of politicians, Garda sweeps and raids and media outrage on the one hand, with the delight and empathy at the lower levels revealed much of the tensions in Irish society and the opposing sympathies of different social classes.

Hughes was a maverick, revelling in the description and though for much of his career that was of value to the Provos, there came a time when it ceased to be so. A guerrilla army must have discipline, of course but it also needs volunteers who can quickly assess a situation and seize the initiative, without referring back to the command structure. The balance between both requirements must be very hard to strike — for individuals as well as for the organisation.

When he and other such activists fell out with their leaderships or “went solo”, they were shunned or worse. In Hughes’ final spell in Mountjoy jail, he was on the “non-aligned” wing of the jail, a Republican prisoner but not under Republican leadership control.

Hughes says that assassins were sent to kill him – he stayed low and carried a loaded .44 Magnum. The leadership of the Republican movement does not always shoot or beat up its dissidents – more usually, it seeks to isolate them. Friends, neighbours, former comrades and even relatives will be advised to shun those no longer welcome, they and their families.

The family feeling, the communal solidarity in the movement becomes its opposite when the leadership brands its pariahs.

Hughes feels he was betrayed to the political police, the Special Branch of the Irish State. But what he says he felt the worst was the treatment of his family while he was in jail. No space on a Republican prison visitor communal transport was made available to his wife and children and cars containing former friends and acquaintances would pass them at the side of the road, even in the rain.

It seems Hughes finds that unforgivable — and no wonder.

As a postscript, Hughes surprisingly declares his support for the Good Friday Agreement, the pacification process. He had been a man of action and, as he said himself, not one for thinking through ideology or politics. But it doesn’t take any great grasp of ideology or politics to see that today it’s more or less business as before in a partitioned Ireland occupied by a foreign power.

1Named after Theobald Wolfe Tone, a leader of Irish republican revolutionary organisation the United Irishmen, died in prison in 1798.