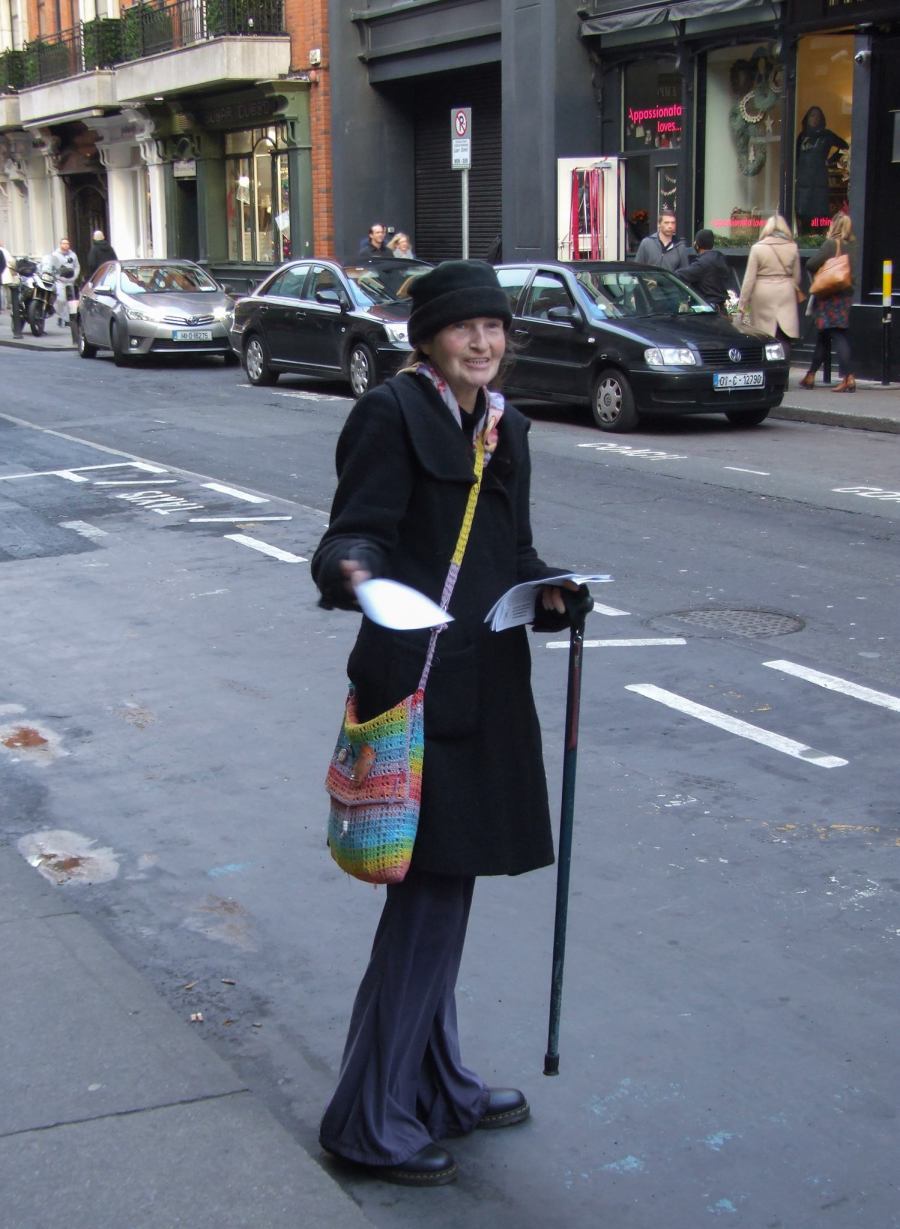 Niall McConnell, Director of the fascist organisation Síol na hÉireann failed to attend court in Dublin on Friday in pursuance of his claim of being assaulted by disabled antifascist Aisling Butler. Gardaí asked for a continuance in order to make further attempts to contact McConnell, including by registered letter but hearing that he had already been sent a letter and also failed to reply to a phone call, the presiding judge struck out the case. Also struck out for failure to appear was another charge by Ciaran Reddin, former right-hand man of McConnell’s (but with whom he has apparently fallen out since). Ms. Butler, who had attended as required, was embraced by supporters.

In July 2020 fascists and other racists objected to the hire of the national Gaelic sports stadium Croke Park in Dublin to a Muslim congregation to celebrate their annual Eid religious festival. The fascist organisation Síol na hÉireann called for a prayer-protest outside the stadium and announced their intention of reciting the Catholic prayer collection of the Rosary there. Their protest was supported by other fascists and racists including Phillip Dwyer of the National Party, Gemma O’Doherty and some others calling themselves Stand Together and QAnon, in emulation of the Trumpist far-Right movement in the USA1.

Dublin Republicans Against Fascism organised a counter-protest and attended with placards in Irish and in English quoting from the 1916 Proclamation2 “The Republic guarantees religious and civil liberty to all” and also chanted those words at the fascists.

“Five of us turned up early, mostly women,” said a spokesperson for the anti-fascist group outside the court “and only McConnell and another two were there with a banner. They took fright when they saw us, folded up their banner and called to the Gardaí for protection. But as more of their sort arrived, they got more confident, opened their banner out and began their prayers and racist chants and so on. When there were a lot more of them than us they got aggressive and there were a couple of scuffles when they assaulted a few on the sly or provoked us by pushing their video cameras near our faces. Some local people came out to stand with us against them but the fascists were arriving from all over.”

McConnell claimed he had been assaulted by Ms. Butler but apparently the Gardaí on the spot were unimpressed by his claims so he took his complaint to GSOC3, which agency charged Ms. Butler with assault. As a result she has been required to attend court a number of times over the intervening years while McConnell and GSOC got their case together.

The Síol organisation is registered as a company rather than as a political party4 and sells fascist and far-Right material on line, causing some of their opponents to call them, along with general far-Right individuals who seek on-line funding: “PayPal Paytriots”. The latter is because of the claim of the fascists and far-Rightists that they are true Irish patriots with Irish Tricolours and “Irish Republic” flags proliferating at their protests.

Referring to the words of the 1916 Proclamation displayed and chanted by the antifascist counter-protesters, the spokesperson for the antifascist Republicans said: “One of the fascists had a Tricolour flag with the text of the Proclamation printed on it. We kept inviting her and her friends to actually read the words but of course they ignored us. They wave Irish flags and play patriotic ballads but they don’t know anything about Irish history or what the people who went out against the British Empire in 1916 stood for. The fascists promote Catholic religion dominance in opposition to the secular Republic that was fought for and in denial of the historic role of Protestants in founding and fighting for Irish Republicanism.”

A repeated feature of the Síol protest outside Croke Park5 was the reciting of prayers of the Rosary loudly through a megaphone. Another was the sprinkling of salt and holy water and vinegar near the feet of the anti-fascists: “They think antifascist women are witches and that will ward them off” Ms. Butler said, smiling.

As Muslims – including children – began to arrive for their ceremony, the antifascists welcomed them and attempted to screen the fascists from the arrivals, while the chants of the fascists grew louder. After the ceremony, the Gardaí arranged for the muslim congregation to leave by another exit and once they were gone, the antifascists left also, some of them to nearby houses.

Spreading fears about “Ireland being swamped by Muslims” is one of the regular activities of the fascists, in contradiction to the statistical facts6. They also claim that asylum seekers are being treated more favourably than the native Irish, being given houses and money, etc. This is also in contradiction of the established facts which are that asylum seekers are housed in rooms in Direct Provision hostels for years in conditions that have been denounced by human rights activists and where a number of suicides have taken place.

Fascists and other far-Right individuals and organisations were very prominent during the height of the Covid pandemic, some propagating unlikely conspiracy theories and others protesting at the perceived limitations of their civil rights.7 Antifascists counter-protested them on a number of occasions, partly in defence of equal rights but also out of concern that following the epidemic, fascists will be used by the ruling elites as historically to crack down on resistance to austerity measures.

In September 2020 a prominent LGBT campaigner was beset by National Party supporters near Leinster House and a member clubbed her to the ground.8 In October that year, antifascists stormed a rally of the same party, causing the latter to ask for Garda protection to escort them away9. Some confrontations took place outside the GPO10 building in O’Connell Street against “Stand Together” and QAnon also and on Custom House Quay two weeks before the assault of the LGBT activist, at a rally organised by the far-Right organisation Irish Yellow Vests, fascists wielding lengths of metal and wood disguised as flags attacked counter-protesters who were then also attacked by riot police. The general tolerance of police towards the fascists – the latter in clear breach of pandemic restrictions — has been remarked upon by a number of observers.

The celebration of Eid in Croke Park last year drew less than a half-dozen fascist protesters. As the Covid restrictions were relaxed, the fascist and other far-Right protests began to fade, though the organisations are still there, regularly seizing on some issue in the media to promote racism, homophobia etc. Some of the participants have a track record of protesting against all kinds of equality legislation over decades and all of them promote the Catholic religion (though some don’t accept the authority of the Papacy). Niall McConnell himself, like most public fascists, is a practitioner of the big lie: addressing a far-Right gathering in Europe some years ago he claimed that Ireland has more migrants than indigenous; on another he claimed on social media that James Connolly had been born in Ireland.11

1These could be seen every Saturday for months outside the General Post Office building in Dublin city centre’s main thoroughfare, O’Connell Street.

2The Proclamation was issued by insurgents in 1916 and is a remarkable document for its time.

4Since the organisation declines to declare its funding sources, it cannot by Irish law register as a political party.

5And also on a number of other occasions.

6According to the 2016 Census, the percentage of the population in Ireland that are muslims is 1.33%.

7E.g that the virus was not real but the restrictions part of a Jewish plot, the vaccination were to inject nanobots into people to pacify them; that the Communist Party of China was secretly running the world through the UN and the EU, that the latter (or Jews) was working to replace white people with people of colour, partly through encouraging homosexuality; the masks were to separate people from one another and damage them through inhalation of carbon dioxide ….

8The Gardaí on that occasion ordered the victim — blood streaming from her head — to leave the area and claimed to the media that no incidence of importance had occurred. In the face of video evidence they later changed their statement and eventually, on a registered complaint by the victim, charged NP member Michael Quinn with the assault. In October 2020, Quinn pleaded guilty and was sentenced to three years in prison, the third year suspended.

10The imposing General Post Office building in Dublin city centre was used as a headquarters by the insurgents in the 1916 Rising and the area outside it is regularly used for political rallies, commemorative events and, in recent years, for feeding homeless or otherwise hungry people.

11The claiming by fascists of the revolutionary socialist James Connolly may seem bizarre but is also an indication of the rank opportunism of fascists generally, in this case because of the high regard in which Irish people hold Connolly. James Connolly was born in the working-class Cowgate area of Edinburgh to parents of the Irish diaspora and both he and his brother became socialist activists, James travelling in later life alternately to Dublin and New York as a socialist writer and organiser. Returning to Dublin, Connolly became a trade union and socialist organiser, historian and journalist, co-founder of the workers’ militia the Irish Citizen Army in 1913 and overall Dublin Commandant in the 1916 Rising. He was executed by British Army firing squad in Kilmainham Jail on May 12th 1916.

The Beacon’s report (doesn’t mention DRAF but you can hear the “religious and civil liberties for all” quotation from the Proclamation being shouted on the video): https://the-beacon.ie/2020/07/31/tensions-at-croke-park-as-far-right-gathered-to-protest-against-eid-celebration/

The Beacon report on conviction of NP member attack on LGBT activist (the mass media omitted to mention his NP membership when reporting on his sentencing but the Beacon omitted the early statement of the Gardaí that nothing of concern had occurred): https://the-beacon.ie/2021/10/19/national-party-member-gets-prison-for-attack-on-lgbtqia-activist-izzy-kamikaze/