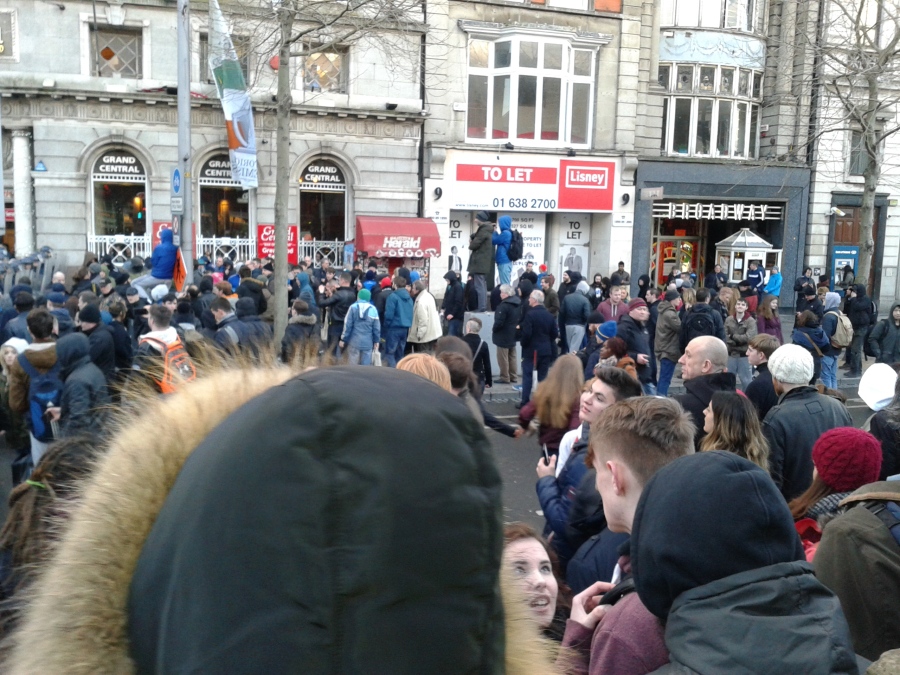 A leaflet from the Socialist Party of Ireland distributed at the antifascist rally in Dublin on Saturday 12th made a correct analysis of the source of the problems in Irish society of which the Far-Right are taking advantage in order to mislead people but also grow. But the leaflet text failed shamefully when it came to outlining the next steps to take.

Titled “OPPOSE RACIST DIVISION — Organise to stop the far right”, the leaflet correctly identified the haphazard Government restrictions as the cause of insecurity and confusion about the Covid19 virus, which fed the negationist movement. It also stated that the Far-Right was manipulating these people and working to infect them with racism and homophobia.

It was correct also to point to the need for socialists to expose the real issues and organise to resolve them.

However, the leaflet text went on to state: “Recent experiences have shown that small counter demonstrations with confrontational tactics have jeopardised the safety of anti-fascist protestors and can drive some some people further into the arms of the far right.”

Perhaps the Socialist Party can tell us what kind of counter demonstration would not be seen as having “confrontational tactics”. In fact since to their credit for the first time some of their comrades actually took part in one such counter-protest, on Custom House Quay on the 22nd August, they could inform their party that the counter-protesters were attacked almost as soon as they stepped on to the Quay, before anything at all was said by them. Also, the Far-Right have been staging regular street protests since last year, many of them centred around the racist and conspiracy theorist Gemma O’Doherty, who recently unfurled a banner calling to “Make Ireland Catholic Again”. Should the Far-Right have been permitted to continue without public opposition?

The counter-protests were small because the majority of the antifascist movement did not participate in them. It was independent anarchists, socialists and Irish Republicans who first took up that task and at that time the Far-Right protests were quite small. When the Far-Right called a larger one for Leinster House, in a coalition of fascist parties and organisations, a fairly large force of Irish Republicans and independent antifascists confronted them and a number of the Republicans were arrested. Following that event, on 14th December 2019 a larger combined force of antifascists including Irish Republicans, Antifascist Action and socialist parties occupied the protest ground planned by the Far-Right outside Leinster House and outnumbered the latter by about ten to one.

The small ad-hoc antifascist coalition of various political and social threads has been left to confront all the other fascist gatherings on their own. A Far-Right group called QAnon occupied the GPO forecourt for Saturday rallies as soon as the Covid19 restrictions were introduced and were left largely unmolested by antifascists to establish themselves as a weekly event, supported by fascist activists who travelled from different parts of the country to attend it. They were left unmolested by the Gardaí too, who nevertheless used Covid19 powers to harass Debenhams picketers around the corner in Henry Street and also by the Special Branch, Ireland’s political police, who harassed pickets held in solidarity with Irish Republican and Basque political prisoners, demanding the names and addresses of the picketers.

All subsequent rallies, pickets and meetings of the Far-Right were left entirely to the small aforementioned coalitions to oppose but when the Debenhams workers staged their march and rally on 8th August, the QAnon group abandoned their Saturday spot and took to Phoenix Park instead, showing the antifascist potential of a large gathering of the Left.

HISTORY OF ANTIFASCIST STRUGGLE IN IRELAND

The rise of the fascist movement in Ireland in the 1930s was defeated by Irish Republicans, who confronted them physically on the streets to the extent that the ruling class feared revolution and mostly acquiesced with De Valera’s government banning a Blueshirt march, after which the Blueshirts became integrated into the Fine Gael party and ceased to have a separate existence.

Every attempt to establish a fascist party since then has been promptly squashed by antifascists. In 2016 the European islamophobic fascist organisation Pegida tried to launch itself in Dublin and was driven off the street by massive mobilisation of both those advocating peaceful opposition as well as those favouring physical confrontation (by the way four Republicans still face serious charges arising out of those events). The tiny group of native Irish fascists was attacked on its way into the city centre and the East European contingent had to run or be brought to safety in Garda vans.

The fascist movement of Sir Oswald Moseley’s Blackshirts was physically opposed in numerous battles on the streets of British cities throughout the 1930s and after WW2, Moseley himself being knocked to the ground in Manchester and hit by a flying brick in Liverpool. Numerous battles took place in London too of course, the most famous being at Cable Street, where a coalition of Irish and Jewish antifascists, along with local Communist Party activists, fought a battle of several hours on 4th October 1936, principally with 7,000 London Metropolitan Police and all the mounted police of the city. The police got through the first barricade but failed to penetrate the second and the Blackshirts had to turn away, many being ambushed at other points such as at Hyde Park Corner.

After WW2 all attempts of Moseley and other fascists to organise were suppressed by robust action on the streets, the most serious being in 1958 in London’s Notting Hill area. Many of the post-war migration of Afro-Caribbean people to London lived in that area. Moseley’s Union of Fascists and the White Defence League organised and whipped up gangs of white youths to attack first migrant Caribbean males, then the white wife of a Caribbean man and finally Caribbean families. The Caribbean migrants and Irish and British antifascists organised defence and battles went on for two weeks. According to Wikipedia: “The riots caused tension between the Metropolitan Police and the British African-Caribbean community, which claimed that the police had not taken their reports of racial attacks seriously. In 2002, files were released that revealed that senior police officers at the time had assured the Home Secretary, Rab Butler, that there was little or no racial motivation behind the disturbance, despite testimony from individual police officers to the contrary.” (That pattern of police denial of racism and neglect of targeted communities became a repeated pattern and has also been seen in many other countries).

When fascists began to organise again in Britain at the end of the 1960s, the parties of the Left first advocated ignoring them and when they did eventually mobilise counter-demonstrations, marched them away from confrontation with the fascists. Meanwhile fascists were attacking sellers of socialist papers, socialist meetings, migrants and ethnic minorities. Some elements of the Left after a while adopted the slogan of “no platform for fascists” which became popularised among students and some staff in institutions of third-level education, eventually becoming policy of the National Union of Students.

A coalition of antifascists of various political backgrounds, including some acting unofficially outside their party discipline, mainly in AFA (Anti-Fascist Action) and small groups of revolutionary communists, anarchists, Irish Republicans and antifascists expelled from their parties (e.g. Red Action) took on the National Front, the League of St. George and the British National Party in numerous battles and smashed the ability of the fascists to take possession of any significant physical space in order to organise.  On September 13th we passed by the anniversary of one of those battles in Lewisham, SE London in 1977 and we are nearly at the the anniversary of another, on the 18th in 1992 at Waterloo (the London Underground and train station, not the site of the 1815 battle in Belgium).

Throughout that period the main parties of the left (with the exception for a period of the SWP and the IMG) refused to confront the fascists physically and instead concentrated on organising events to attract youth away from fascism, principally through the Anti-Nazi League. It was however clearly the physical confrontations by antifascists on the streets, as had been the case in the 1930s that again defeated the rising fascist threat in Britain – for a time. Clearing the fascists from the street not only prevented the intimidation of Left activists and ethnic minorities and prevented the creation of fascist areas but also made it much more difficult for fascists to recruit and marshall forces.

Rather than draw on the lessons of those struggles in Ireland and in Britain, the leaflet text advocates repeating the mistakes. In effect, the leaflet advocates leaving the antifascist mobilisations for the moment and concentrating on the class struggle against the system. That strategy entails allowing the fascists to become established and grow unhindered, making it much harder to root them out later. But not only that – the Left in Ireland has a pretty poor record of taking on the capitalist system and is particularly weak at the moment, with the trade union movement largely supine. The leaflet points to the just struggle of the Debenhams workers, with which the SP is particularly closely connected, at least in Dublin; however it is well to note that those workers have been sacked, their workplaces closed and the struggle is a last-ditch defensive one for redundancy pay. In other words, we are nowhere near a situation where the overall struggle against the capitalist system is such as to cut the ground from under the Far-Right.

Because those loose antifascist networks currently active are not under the control of the SP and are hardly likely to heed their call, the effect of the leaflet text is to advocate a continuation of the current situation, where counter-protests will be outnumbered by mobilisations of the Far-Right, despite the fact that the fascist parties actually have tiny support, bussing in people to swell the numbers. Fascist attacks will continue and may well even escalate. Fascists will continue to arm with Garda impunity for their attacks but it is certain that when the antifascists arm likewise, they will be arrested for “possession of offensive weapons” and even jailed.

Finally, the leaflet failed to give any specific indication of a short or medium-term way forward except to “join the socialists”, i.e the Socialist Party. The leaflet could have advocated building a broad antifascist front and called on people to help in that work, to bring in people not currently active, to ensure large turnouts to counter mobilisations of the Far-Right. But it didn’t.