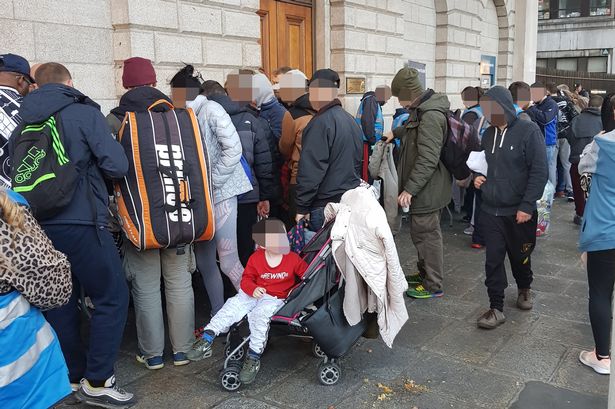 Go to Dublin city centre any evening and you will see people queuing up for food and water, being dispensed by teams of volunteers. There are at least 16 different organisations carrying out this work in the city centre, mostly outside the General Post Office, an imposing building and historical icon, the location of the HQ of the 1916 Rising from Easter Monday to Friday1. These are mostly community initiatives or if not, religious organisations (Christian, Muslim, Sikh), their staff volunteers, their efforts supported by donations. I arranged to speak to one of those volunteers.

DB: Orla, thank you for talking to me. You help with one of the soup-run-type initiatives? In Dublin City Centre?

Orla: That’s ok. Yes. Ours is one of the ones that sets up in front of the GPO, under the arch. We take over after another group has already been there.

And there are still people to feed? Even though a group has been feeding people before you?

Oh, yes. Sometimes the queue is already stretching to the corner of the GPO when I get there.

How long have you been doing it?

Since September last year with this group and a few stints with another group before that.

What made you take it up?

Over the years, like I suppose lots of other people, I’ve been seeing the rich get richer, the poor poorer. It’s made me more sympathetic to people in difficult situations. I don’t think people get where they are just by entitlement. It’s given me different perspectives. One Christmas Night … it was 2016 …. I got to go with a homeless outreach team, supporting people sleeping on the street …. It really opened my eyes. So I got to know a few of the volunteers, started off donating to their teams. Then one day I joined the volunteers.

It can be challenging. We need to wear masks and gloves. Some of the people have mental health issues. You might get someone trying to take more than their share – well, if you see they have kids, that’s OK, or you really know they are taking one for someone else …. but you have to explain that the food is being shared, it’s for all and has to last. The queue has to form up at one end and has to keep moving …. Most are grateful and cooperate.

So, what do you and the other organisations provide?

You spoke earlier about donations. I have heard some volunteers say they don’t want money, also claims that some organisations asking for money have been scams. Would you like to talk a little about all that?

It is an issue. Most of the organisations are not registered charities that have audited accounts ….

Some registered charities have been found to be crooked too …

Yes, some certainly have. There was concern about a particular organisation that was collecting in front of the GPO. A reliable person who knew the score challenged them and warned others about them and we haven’t seen them since.

But getting back to donations to the teams feeding people …. are they in money or in food and water?

Mostly they are in water food and – bread, cakes, chocolates. There’s some shops, including convenience stores, that donate us bottled water and also food. Some of the food is prepared elsewhere and then brought down to the teams, already packed into single containers – because of the danger of infection. And we provide plastic forks and spoons. And there’s hot water containers for hot drinks. There’s one group of people who make sandwiches to bring down – they’re very popular. Some people help in preparing stuff but don’t work on the table handing it out.

Occasionally, but we usually ask people to buy food with the money and donate it. Occasionally a money donation might be accepted and a receipt would be given. But what can you do when someone just walks up to us when we’re busy, hands over a ten-euro note and walks away? Oh by the way, we don’t do a clothes service but if we know someone in particular needs clothes or shoes, we might bring them in. Or pass them on to the Lighthouse or Inner City Homeless.2 Sometimes outreach teams from registered services will come along to us too, so they can get someone into a hostel.

I have heard of some groups of far-Right or fascist orientation saying we should only be looking after the Irish. What would you say about that?

Well, I don’t agree. We feed people of whatever nationality, so long as they’re not scamming. Sometimes we get some Irish people in the queue making remarks like that and we have to be careful not to rise to it, to get in big arguments with them — but we don’t agree. They shouldn’t be judging. We don’t get people from Direct Provision but I’ve heard those are certainly not holiday camps. Racists say foreigners get things for free but any accommodation they get, they pay rent for. People might be here from abroad, working, paying rent, then they lose their job, things go wrong for them …. could happen to anyone.

Then, you might be from one county and be refused help in another. I remember a program on TV early in the year about a young person left on the street because he was from another county …. shocked a lot of people.

Has there been any trouble from racist organisations?

I remember that just before Christmas there were some threats made on social media from some far-Right people to some of the volunteers.

I heard about those threats too. Did anything happen?

No …. supporters turned up to defend them and stayed near for the whole shift.

So, is it tiring, after a day’s work, helping on the soup run line for two hours,?

Yes, after work I get something to eat, then head over there.

Well, thank you Orla for taking the time for the interview and for your work.

Go raibh maith agaibh go léir and to those who supply them with donations of food and bottled water.

Thankfully these organisations are providing services but it is a sad comment on any society that they are needed, let alone in a State that claims it won independence a century ago. The GPO is a central location in the city centre and is obviously convenient for the operation of the services. Nevertheless the fact the building housed the headquarters of the 1916 Rising for nearly five days is a poignant counterpoint to the aspirations of those who fought for independence and a better life for the people.

That some far-Right and outright fascist organisations such as the National Party are using the issue of poverty and homelessmess to point the finger not at the system but at migrants, is disgusting. Preying on the vulnerable, poisoning their minds and using them as a front to pretend that they are actually doing charitable work, filming their occasional propaganda forays into the city.

Meanwhile, there are real people of many different ethnic backgrounds actually out there week after week, doing the real work, whether by religious or communal solidarity. Some of the latter are also, at other times, political activists and to learn that they have been threatened by fascists makes one’s blood boil.

Fair play to those who are doing the real work. But it shouldn’t be necessary. The system is sick. It needs a fundamental change or at least a sharp shock.

1On that afternoon some of the garrison left to take wounded to Jervis Street Hospital and the major part, to head for the north-east of the city to continue the resistance but having to stop in Moore Street.

2Registered NGO services working with the homeless in Dublin.