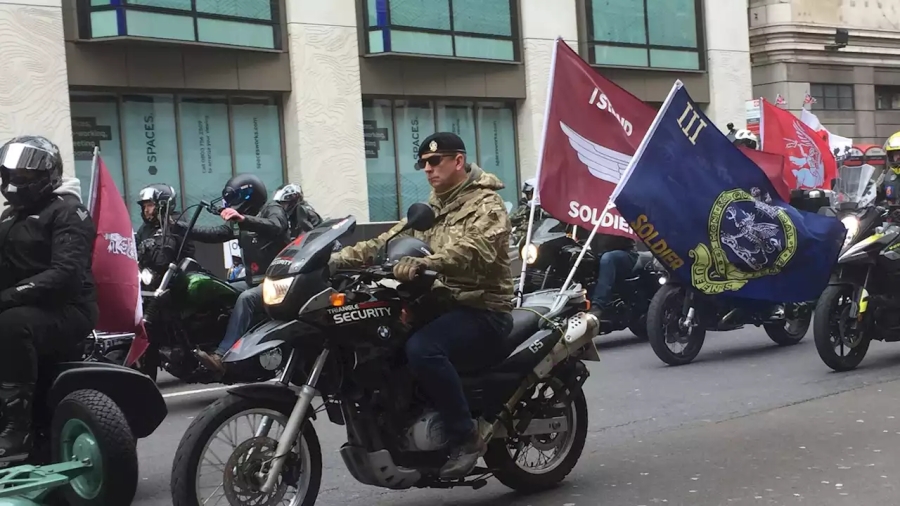 Brandon Sullivan ✒ (in The Pensive Quill)

From the window of the government building I worked in, I noticed a gathering of men.
Mostly dressed in motorcycle leathers, many of them very overweight, and bearded, the crowd grew to perhaps 70 or 80. Some of the men were wearing maroon berets. They were a comedic spectacle: imagine a few score of Ken Maginnis-types in motorcycle leathers. They lined up in military formation, their physical condition making this pretence pathetic rather than sinister, and unfurled a very small banner which read “WE SUPPORT SOLDIER F.”

I couldn’t help thinking of protests against the injustices visited upon the Guilford Four and the Birmingham Six, protests held in England. How society seems to have changed, and not for the better.

Douglas Murray, a neo-conservative thinker and writer much respected and admired by many on the right, had this to say about Soldier F in his peerless account of the Bloody Sunday Inquiry: Soldier F — who fired 13 rounds on the day — whose performance in 1972 and 2003 was most disturbing. It always seemed to me that if anyone was deserving of prosecution, then it was him.

Murray also had this to say about the killers of 14 civilians on Bloody Sunday: “The soldiers of 1 Para weren’t just unapologetic killers, but unrelenting liars.”

Recently, former British solider Dennis Hutchings faced trial for the killing of John Pat Cunningham. Hutchings received much support, including high profile political support, from those who objected to his prosecution. The circumstances of John Pat’s death could scarcely be more upsetting:

A Benburb doctor said the victim, who was his patient, had been born with an incomplete development of mind, and had been declared a person requiring special care. The doctor said that about a year earlier, near the scene of the shooting, he had come across soldiers pushing John Cunningham into a Saracen armoured car. He spoke to the soldiers who said he had been hiding in the bushes and acting suspiciously. The doctor said he had told the young man’s mother about the incident and advised her to keep a special watch on her son’s movements, in view of his apprehension towards soldiers and their uniforms.

Dennis Hutchings is alleged to have shot John Pat in the back as he ran away from an army patrol. There is simply no way that John Pat was a threat to them. British and Unionist politicians were outraged over a prosecution taking place. They were silent when the prosecution of Soldier F, a perjurer, multiple-killer, and perhaps the single greatest recruiting sergeant the PIRA ever had, fell apart.

From tragedy to farce, we can now look at the case of Donald MacNaughton, who was tried and acquitted of attempted murder in 1974. The case against him fell apart because of “inconsistencies” with the victim’s evidence, and the evidence of MacNaughton and his comrades “fitted together and was not mutually contradictory .” MacNaughton was a member of the Parachute Regiment, whose soldiers colluded with each other to lie to several British Government Inquiries, and indeed to British Army investigators. The farce in this case, I think, demonstrates something of the self-degradation of those on the English right: MacNaughton became a Brexit Party campaigner, and is widely believed to have thrown yogurt over himself to gain media attention.

Hutchings died before his trial, and will be given full military honours at his funeral. Soldier F was promoted and decorated several times in his military career. Just as their killings of Irish citizens did not unduly affect their lives for decades, was there any serious attempt at prosecuting them to the full extent of the law?

But their prosecution is not really the point. The level of support for them is.

What does it say about sections of society, and politicians, if they can support those suspected of murder, so long as it was committed by a uniformed killer, regardless of the status of the victim?