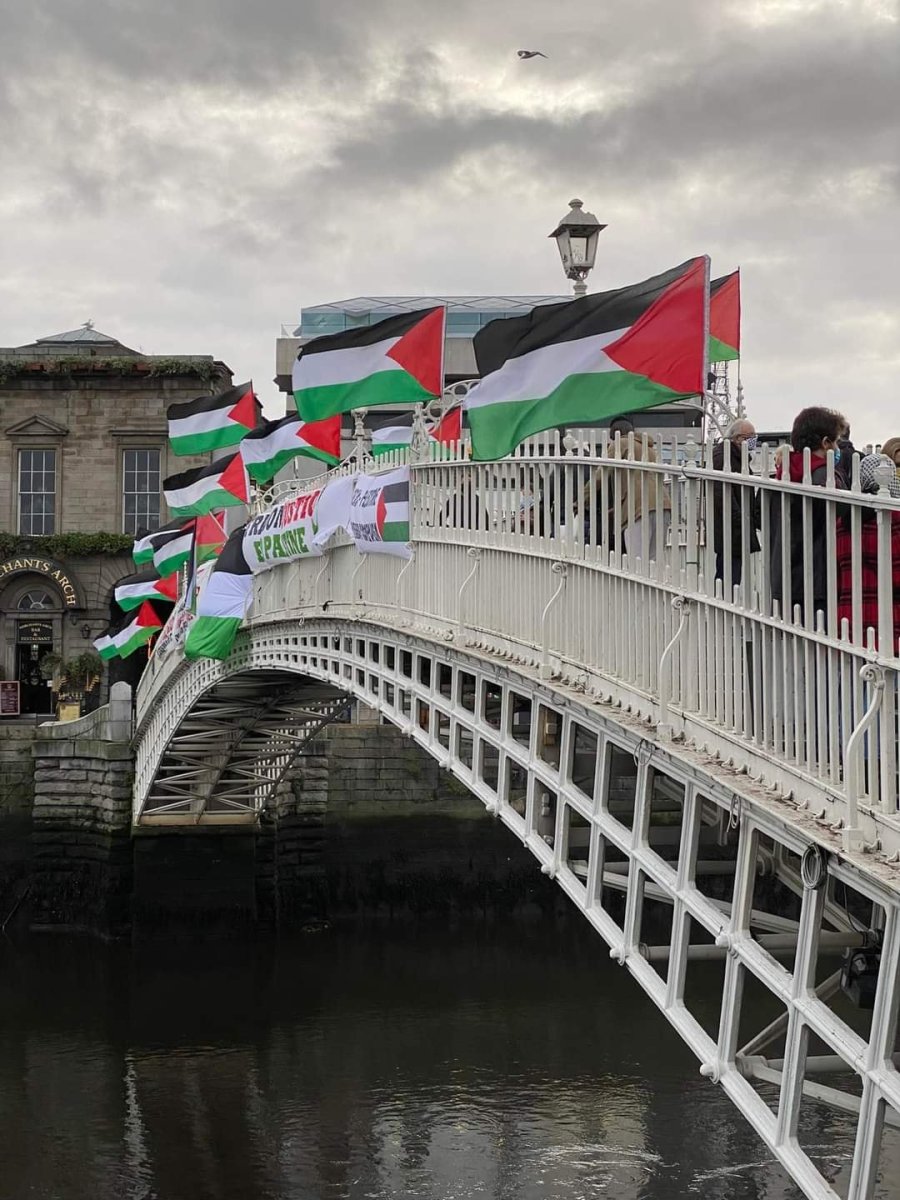 Palestinian flags fluttered in the breeze over the iconic Ha’penny Bridge in Dublin City centre, while banners festooned its length on New Year’s Eve. The numbers were down from previous years, more likely from the soaring Covid19 infection rate than from any lessening of the long-running Ireland solidarity with the oppressed Palestinians. This was ironic since, unlike previous years, this was not a rally braving sleet, snow, rain or icy wind – in fact, the very mild weather raised only the amount of breeze necessary to set the flags fluttering.

The event is organised every year for New Year’s Eve at the same location by the Ireland Palestine Solidarity Campaign and supporters, among which were Irish and Palestinians, handed out leaflets encouraging BDS (boycott, divestment and sanctions) of Israel, an apartheid ste. Martin Quigley, for the IPSC led some chants on a megaphone, which were taken up by people on the pedestrian Bridge, among which were that “Israel is a terrorist state”, that “Palestine will be free” and in solidarity that “we are ALL Palestinians”.

Each year more Palestinian land is stolen, more of their homes demolished or under threat of eviction, in Gaza they have periods without electricity, they are restricted in importing fuel for heating or cooking (never mind transport), or building materials (so much has been destroyed by the Israeli bombardments), they continue to be harassed and made have lengthy waits at checkpoints, their inshore sea is polluted, their fishing boats further out are attacked and harassed ….

The United States is the major power backing the Israeli Zionists and partly because of its position in the world and partly also for their own economic or political interests, most of the European states back the Zionists too.

In 2018 Donald Trump, as US President, moved the US Embassy for Israel into Jerusalem, endorsing the Zionist claim that the multi-faith city is Jewish and Zionist, although it is an occupied city even in international law. Shortly before he reluctantly left the office of the US Presidency, Donald Trump also endorsed Morocco’s illegal occupation of Western Sahara in exchange for Morocco recognising Israel. So far, Joe Biden, Trump’s successor, has not reversed either of those decisions.

THE PEOPLE OF THE WORLD SUPPORT THE PALESTINIANS

As is usually the case, it is the ordinary people in Ireland and around the world that support the Palestinians, while the big capitalists and imperialists, while occasionally criticising the Israeli Zionists, continue to support them politically, economically, culturally and militarily. Even in the United Nations, an organisation controlled by the big powers, a majority condemned the Zionist state in 17 separate motions in 2020 and last year formally ratified another six resolutions criticising Israel.

So why has international action not been taken against this terrorist state? The answer is that although the UN has 193 member states, only its Security Council decisions have to be carried out and there are only five permanent members of the Security Council: USA, UK, France, Russia and China. And what’s more, their decisions have to be unanimous.

On the other hand, so many civil organisations around the world have declared themselves in solidarity with the Palestinians and in Ireland. Hundreds of thousands have marched in so many countries and sports people, many popular culture stars and academics have refused to perform or attend conferences in Israel. One can no longer find Israeli goods in most shops or supermarkets (and when on occasion they are on sale, their country of origin is not marked on the product).