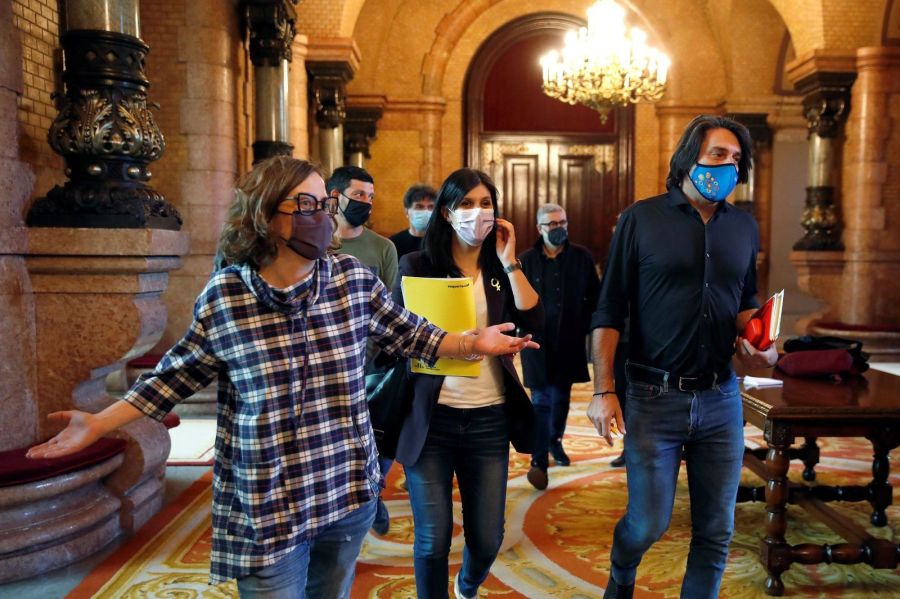 (Translation D.Breatnach from Publico report 12 May 2021)

ERC, JxCat and the CUP parties reached a “minimum” agreement this Wednesday to unravel the investiture negotiations to avoid an electoral repetition after the results of the elections on February 14th in Catalonia. The deadline for investing the President of the Generalitat is May 26 (after that new elections would need to be called — DB).

After two hours of meeting in the Parliament, the three organisations issued a joint statement that to promote an “overall National Agreement for Self-determination” and a “space for the debate on the independence strategy beyond governance.”

After the meeting, the Deputy General Secretary and ERC spokesperson, Marta Vilalta, the JxCat Deputy Francesc Dalmases and the leading spokesperson of the CUP in the Catalan Chamber, Eulàlia Reguant, came out together.

Formation of a new Government

The act of separating the debate on the independence strategy from the formation of a new Government was one of the obstacles that prevented the agreement, JxCat until now requiring ERC to link both items.

Although the wording of the statement is ambiguous on this point, it already aims to unlink the creation of a unitary strategic direction of independence from the negotiation for governance, which was threatened recently by the disagreements between ERC and JxCat.

Relations were very strained last Saturday, when the ERC candidate for the investiture, Pere Aragonès, announced that he would no longer continue negotiating a coalition government with JxCat, which he accusef of delaying the negotiation, and that from now on only he would contemplate ruling alone.

In the joint communiqué, entitled “Commitment to a National Agreement for Self-determination”, the three formations emphasize that the results of the 14 February elections “offer the independence movement the possibility of opening a new cycle for national liberation.”

The negotiators have agreed on four “minimum points” based on a proposal that the CUP, convener of the summit in Parliament, had put on the table, in which it has become a mediator to facilitate a rapprochement of positions between ERC and JxCat.

In the first point, they undertake to “provide a response to the social and economic crisis” that Catalonia is experiencing, while in the second they commit to “build a wall to defend fundamental and basic rights that have broad support from Catalan society and which do not fit within the framework of the State “.

Third, they commit to convening a first working meeting to configure “an Overall National Agreement for Self-determination, to go beyond political parties and to bring together the broad social majority of the country in favour” of a referendum.

“With the unequivocal commitment that through dialogue and democratic struggle in the (Spanish) State the exercise of self-determination and amnesty can be achieved during the next legislature,” they added.

Sources with inside knowledge of the meeting indicated to Efe (news agency) that the meeting was positive in moving forward, although it is too early to say if it will be enough for ERC and JxCat to get back on track to an agreement that in recent days had been difficult.

For his part, the leader of the PSC in Parliament, Salvador Illa, asked ERC to “lift the cordon sanitaire” that he raised against the social democrats before the 14 February elections and to facilitate a left-wing majority led by the PSC. “I challenge them: with the failed independence path not working, at least let a left-wing government be constructed and lift the cordon sanitaire that they signed against the PSC,” he said on a visit to Mataró (Barcelona).

The leader of En Comú Podem in Parliament, Jéssica Albiach, insisted in TV3 that for them “they continue to” attempt to form a Government with ERC, although she also declared the possibility of facilitating Esquerra to govern alone.

The president of Citizens in Parliament, Carlos Carrizosa, rejected the idea of ​​new elections if the Government is not formed because he believes that it would reflect a “lack of respect” for citizens.

For her part, the president of the Catalan National Assembly, Elisenda Paluzie, demanded an agreement from ERC, JxCat and the CUP to form the Government and called a demonstration for this Sunday in Plaça Sant Jaume in Barcelona to demand a pact between them.

ERC (Esquerra Republicana de Catalunya – Republican Left of Catalonia), republican party of a left outlook varying from radical to social-democratic. Its leader, MEP Oriol Junqueras, is in jail arising out the Spanish State’s opposition to the holding of the Referendum of October 2017. The party has 32 seats in the Parlament.

JuntsXCat (Junts per Catalunya – Together for Catalunya), a coalition of forces originally brought together by liberal conservatives but pushing hard for independence and more lately adopting many socially progressive policies. It leader, MEP Carles Puigdemont, is en exile in Brussels to avoid Spanish jail, along with others. The party has 33 seats in the Parlament.

CUP (Canditatura d’Unitad Popular – People’s United Candidature) is a more radically left-wing coalition of groups that until recently focused on local democracy than on national politics but is completely in favour of independence from the Spanish State. One of its leading activists, Anna Gabriel, is also in exile to avoid Spanish jail. CUP now has nine seats in the Parlament

ERC and JuntsXCat have 65 seats between them which give them a comfortable enough parliamentary working majority in the 135-seat Parlament and with CUP’s nine seats, could defeat a vote of no confidence even if the social-democratic (but unionist) PCE (33) and Comu Podems (8 — a local version of Podemos) supported a vote of no confidence by the right-wing parties of Ciutadans (6), Vox (11) and PP (3).

ANC (Asamblea Nacional de Catalunya – National Assembly of Catalonia) is a huge grass-roots pro-independence organisation which pushed for the Referendum in the 2017, organised massive demonstrations for independence and participated in organising a number of one-day general strikes of protest in and since 2017. Its former leader Jordi Sanchez is an MP but is also in jail along with another grass-roots movement leader, Jordi Cuixart of Omnium Cultural.

What is at stake here is not merely a power struggle between one independentist political party and its leader and another party and its leader, but also a division over tactics and perhaps even strategy. Puigdemont of JuntsXCat led all the independentist parties and, in a sense, the whole united t movement through the Referendum, Spanish police invasion and violence and as far as declaring a republic – but then blinked and a few minutes later suspended that declaration.

Apparently he had been promised by ‘friends’ in the EU that if he suspended the declaration, they would come in and put pressure on the Spanish State. Predictably, I would say, they didn’t come through on that, Spanish State repression followed and Puigdemont went into exile.

Since the repression, ERC has been insisting they need to sit down and talk with the Spanish Government, which is a coalition of the social democratic PSOE and the radical social-democratic and trotskyist alliance of Unidas Podemos. However, the Prime Minister, Pedro Sanchez, has stated unequivocally that although he wants to talk, he will not be discussing holding a government-authorised referendum on independence for Catalonia nor the freeing of the political prisoners arising out of the last Referendum. They also voted in the Spanish Parliament to support the Government getting its budget approved, thereby helping to keep it in power.

Naturally enough, much of this has raised suspicions that ERC was preparing a sellout and even those who did not necessarily suspect that were exclaiming, since independence referendum and prisoner freedom is ruled out: “Talks with the Spanish Government about what?”

Despite Puigdemont’s faulty judgement at the time of declaring the Republic, he continues to have a lot of support in the independentist movement. However his insistence and therefore that of JuntsXCat that the forum for discussing and deciding independence strategy has to be the Consell per la República (Council for tge Republic) has caused a lot of trouble within the movement for Catalan independence. The Consell was formed as a private organisation by Puigdemont in Barcelona and in Brussels and, while in the latter sense it is out of the reach of the Spanish State, it is also out of any democratic control from within Catalonia, which ERC has pointed out as its reason for not agreeing to that measure.

The current agreement has bridged the gap temporarily and avoided the parties having to go into other elections for the second time this year, purely for the reason that the two main parties of the movement cannot agree with one another on the way forward. And momentum, the loss of which can be fatal for revolutionary movements, can hopefully start gathering force again. But there are likely to be further disagreements ahead. Which must be pretty depressing for the ordinary activists and supporters in a movement that has come so far so quickly and then stalled, while a number of people went to jail and over 700 town mayors are awaiting processing by the Spanish courts.

On the other hand, the role of mediator played by the CUP has no doubt enhanced their standing in the eyes of pro-independence Catalonia.