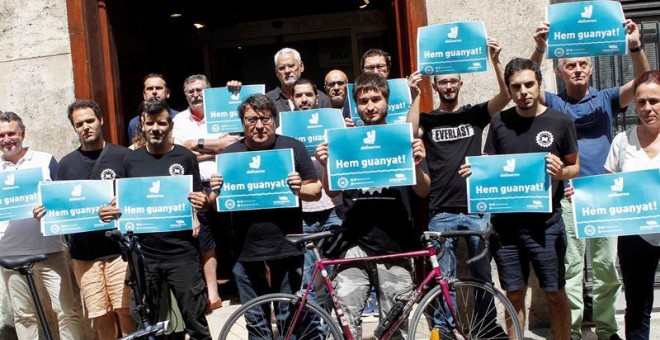 JUDGEMENT OF SPANISH SUPERIOR COURT IN FAVOUR OF THE WORKERS

Yet another repeat: the nth judicial victory of the riders against Deliveroo. On this occasion, the Superior Court of Justice of Madrid (TSJM) ratified the ruling in favor of 532 deliverers of the digital platform by recognizing them as employees and not as freelancers, as the Labor Inspection of the capital had ruled.

The TSJM dismissed the appeal filed by Roodfoods Spain S.L.U., the holding company of Deliveroo, against the ruling pronounced on July 22nd last year by Madrid’s Social Court No.19. Back then, the court had concluded that the distributors were workers of the company.

“In the provision of services by the deliverers affected by the process, during the period to which the liquidation act refers, labor conditions prevailed, which leads to the judgement of the demand”, states the text accessed by this media. (Trans: ??)

FIRST GREAT COLLECTIVE VICTORY OF THE RIDERS AGAINST DELIVEROO

Therefore, the TSJM insists on the relationship between the home delivery company and the riders: “The details or characteristics of an employment relationship concur when assessing the existence of habituality, periodic retribution, dependency and subject to orders and business instructions, alienation of benefits and risks and very personal nature of the provision of service”.

A Labor Inspection report estimated that the deliverers were false self-employed and that Deliveroo “covered up” an ordinary labor relationship with them. The General Treasury of Social Security took up the challenge and filed a lawsuit, which was decided by the judge. The oral hearing, held on May 2019, had the testimony of more than 500 riders.

The workers’ lawyer, Esther Comas, highlights the “importance” of the sentence. Not only because it affects 532 workers, “but because it makes a very exhaustive examination of the conditions of employees who, in turn, can be extrapolated to other colleagues in the same company and even from other platforms [Glovo and Uber Eats]”, the member of the Madrid Ronda Collective pointed out to Publico.

Also, the UGT union welcomed the decision of this court: “We consider this judgement very important since it summarises everything that we have been fighting for and which coincides, in its conclusions, with another ruling by the Madrid TSJ on Glovo’s working model,” UGT explained in a press release.

The collective fight of the riders adds another victory. In June 2019, Social Court No.5 of Valencia also ruled in favor of the delivery riders. Delivery riders in cities like Barcelona or Zaragoza await an oral hearing for the law to recognize them as employees, based on the judgements pronounced against Deliveroo and Glovo.

And, despite the infinity of reports prepared by the Labor Inspectorate in different provinces, digital distribution platforms continue to operate without a regulation that guarantees the rights of their workers. Also, taking into account that the number of employees in the sector is around 14,337 people, UGT estimates that Social Security lose up to 76 million euros, according to the report on digital distribution platforms by Work, presented last September 6th.