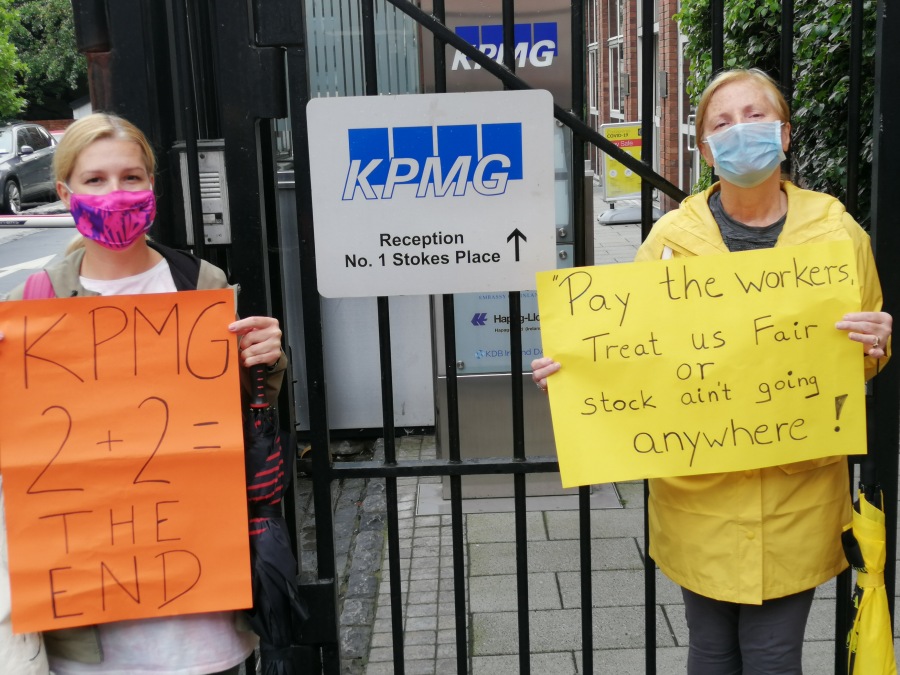 Sacked workers of Debenhams picketed offices of KPMG, the appointed liquidator of their former employer to protest threats of injunctions. The workers are demanding the statutory two weeks’ redundancy plus another two and that they be treated as the first creditors to be paid out, instead of being last, as is usually the case in receivership. Until they receive an agreed settlement, the workers are maintaining their 24-blockades on Debenhams stores, supported officially by their union Mandate, to prevent the company removing its stock.

Finding other means to keep themselves amused.
(Photo: D.Breatnach)

The British-based department store retailer Debenhams closed its Irish branches in Dublin, Limerick, Galway, Waterford and Cork during the Covid19 lockdown earlier this summer and has yet to pay the workers their redundancy pay. Picketers attended Harcourt Street yesterday to gather outside the offices of KPMG, the multinational financial audit services company. KPMG recently claimed it has a potential buyer for a number of the Debenhams sites and while declining to name it, threatened to apply for injunctions against the picketers in order to remove stock and allow the new buyer to move its own stock in. RTÉ reported the company also claiming the union leadership had agreed and said that pickets in Cork were unofficial, both claims which however were denied by the new General Secretary, Gerry Light. RTÉ quoted Mr. Light as saying that the continuing pickets are officially backed by the union and that if there is a new buyer, they’d be interested in talking to them.

A placard displayed on the picket in Dublin pointed out that the workers have been blockading Debenhams sites for 131 days and one of the speakers at the picket acknowledged that keeping up an action over such an extended period of time is difficult. A number of speakers outlined the necessity to remain strong while Paul Murphy, socialist TD (member of the Irish Parliament) stated that the talk of injunctions was not a sign of strength of the liquidators’ position but rather one of weakness. Another speaker called for a strengthening of the pickets now and a number stated that any injunctions would need to be defied.

Meanwhile, a message of solidarity came from some of the Dunne’s Stores Anti-Apartheid strikers, the famous strike 1984-1987 in pursuance of their union’s policy (then the IADTU, now incorporated into Mandate) not to handle good from South Africa (then under racist white minority regime).

“What has happened the Debenhams workers is atrocious,” Ms. Gearon wrote. “Some workers have given decades of service to the company and then when it suits the company just abandons them.

“But what is inspirational is the fact the workers are trying to change legislation to protect all other workers from this terrible predicament.”

Ms Gearon added: “When we started our pickets on this day in 1984, people told us we couldn’t win. They said ordinary retail workers didn’t have the power to change legislation. Well 10 of us stuck to our guns and we forced the Irish Government to ban all South African goods.

“There were only 10 of us, there are 1,000 Debenhams workers. Imagine the changes they can force if they stick together in their trade union.”

Picketers outside the KPMG offices in Dublin chanted slogans including: “What do we want? Two plus Two!” “When do we want it? Now!” “When under attack– Stand up, Fight back!” and “Treat us right, treat us fair, or your stock ain’t going anywhere!”. The MC of the event also raised cheers when he told those in attendance that pickets were taking place simultaneously at KPMG officers in Galway and Cork.

Sites of Debenhams stores are being picketed on a 24-hour basis and solidarity can be shown by attending in person.

Support from Dunnes Stores Anti-Apartheid strikers of the past: https://mandate.ie/2020/07/dunnes-stores-anti-aparthied-strikers-back-debenhams-workers/