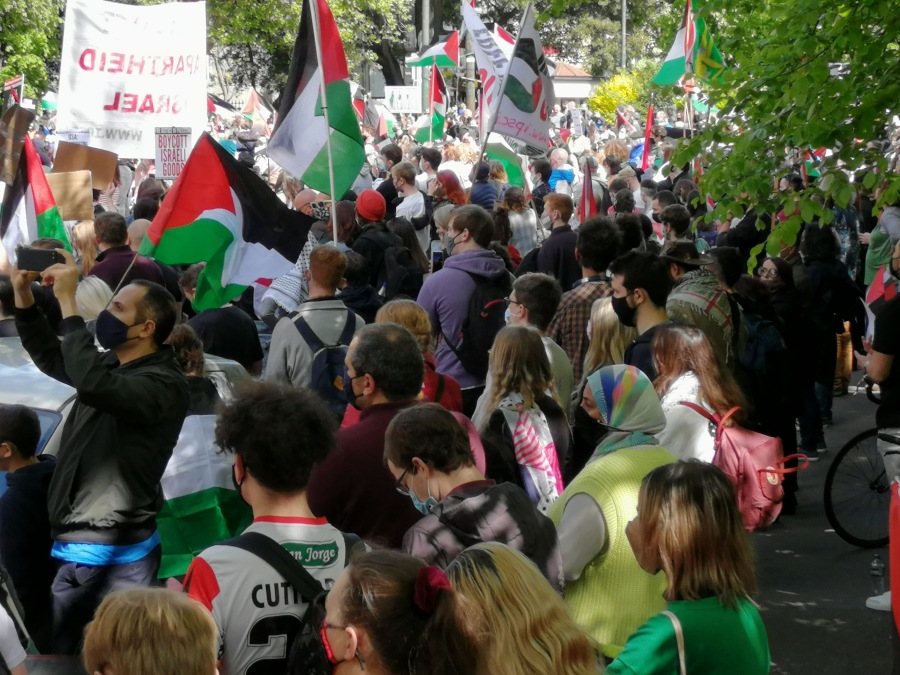 Thousands rallied in the centre of Dublin today, Saturday 22nd May, to express their solidarity with the Palestinian people and their outraged opposition to the murderous attacks on them by the Israeli State. From O’Connell Street they marched across O’Connell Bridge, into Dawson Street and from there straight along Mount Street, across the Grand Canal and on to the Israeli Embassy. Speakers emphasised that the ceasefire, even if it holds, is in essence temporary, since the Israeli occupation has led to war after war and must inevitably lead to another, stating the need therefore to work for an end to the apartheid and similar policies of the Israeli state.

The event was organised by the Ireland Palestine Solidarity Campaign, which had an acapella singing group perform a few songs at the Spire and a number of speakers before they set off on the 3 km march and more speakers outside the Embassy too. Conservative estimates put the number on the march at over 5,000. The slogans shouted for the most part were: “Free, free Palestine!” “One, two, three four – Occupation no more!”; “Five, six, seven, eight – Israel is a terrorist state!” and “Boycott Israel!” “From the river to the sea, Palestine will be free” was another slogan.

The ceasefire is now in place since early yesterday (Friday). The current war began with two offensives by the Israeli Zionists on Palestinians in Jerusalem: the first by Israeli settlers harassing and threatening Palestinian residents in the Sheik Jarrah district that they are going to have them evicted because “all of Jerusalem should be Jewish only”; the other nearby in the vicinity of Al Aqsa mosque, where Israeli police harassed Muslims coming to celebrate the religious festival of Eid (this year on May 12th– 13th), culminating in an armed invasion of the temple by Israeli police firing rubber-tipped bullets and stun grenades at the devotees. However the dates fell close also to the anniversary of the Nakba, the Castastrophe of 15 May 1948, the founding of the Zionist state, massacres of Palestinians and expulsion of more than 700,000 refugees whose descendants are in many parts of the world today, forbidden by the Israeli authorities to return.

In the 11 days of war just past at least 232 Palestinians, including 65 children, have been killed by the Israeli forces, whilst on the Israeli side, despite hundreds of home-made Palestinian rockets fired at Israel, 12 people, including two children, have been killed. Many buildings in the Palestinian enclave of Gaza have been destroyed or part-destroyed, including hospitals and medical centres and there is major disruption to electrical service and water supply in a city which often experienced power and water flow cuts even in what passed for “normal” times in Gaza. Those killed were mostly in Gaza but Israeli forces killed 11 unarmed civilians in the West Bank also and wounded many, as they came on to the streets in solidarity with those in Gaza and in Jerusalem.

Street events in solidarity with Palestine were also held in cities and towns across Ireland, including Cork, Limerick, Galway, Belfast, Derry and in fact in most counties.

The police on this occasion did not carry out harassment of demonstrators1 but in at least one instance, in Northumberland Road, stopped a section of the march to wave through traffic across it, putting uninvolved pedestrians crossing on a green light in danger. This occurred despite two marchers attempting to block the traffic, the Garda calling one a pejorative name and ordering him to stand aside.

This was a job for official stewards and in fact, there were far too few of these. I saw perhaps around 20 getting instructions from the Chief Steward before the march at the Spire, some of whom seemed inexperienced but around 50 stewards were needed for a march this size, with a core of around 30 experienced. Stewards could be seen at times enforcing the rule to wear masks, as some young people removed them to shout slogans but once the middle of the march neared the Canal it was rare to see a steward.

A Far-Right group calling themselves “Rise Up Eireann” (sic — who apparently don’t even know the official name of their country) had called for events in various parts of Ireland and had advertised the GPO as being one of the venues.

With apparent lack of awareness they scheduled theirs in Dublin for the same time as the Palestine solidarity rally, 2pm. No far-Right group was seen but one individual, a prominent QAnon activist posted a video of the Palestine solidarity marchers while voicing her disgust that the cops were not batoning or even harassing the demonstrator as they allegedly do to demonstrators demonstrating “for our civil rights.”2.

Speaker after speaker at the event pointed out that Israeli massacres and other onslaughts are often followed by ceasefires and back to “normal” oppression and theft of land, until the next war. As long as Israel is an apartheid occupying state, war is inevitable and so is oppression. Some speakers urged those present to encourage people in their social, educational, community and trade union groups to sign up to boycott, divestment and sanctions against Israel. A much more specific direction was given by Richard Boyd Barrett TD, who urged people to write emails to their TDs (parliamentary representatives) in advance of Tuesday’s debate in the Dáil, asking them to vote in favour of the “Occupied Territories” Bill.3

A young Palestinian speaker from a Jerusalem district spoke with passion and made an interesting point, that a demonstration such as this one would be labelled “terrorist” by the Israelis and people would be liable to be shot with live rounds as well as with less lethal projectiles and gas.

It is a terrible statistical fact that in Israeli attacks on Gaza, one quarter have been children. Outside the Israeli Embassy the crowd grew quiet as a child read out the names of the children killed in Gaza, which was followed by a call for a minute’s silence in respect. The crowd was so big that out on one of the fringes, they did not hear the call and were chanting slogans.

Other speakers included a Palestinian young woman Ola at the Spire and Mags O’Brien of SIPTU outside the Embassy, where Martin Quigley, former Chairperson of the IPSC launched into a denunciation of Israel and of the Biden and the USA’s role in Palestine.

As with other Palestine solidarity marches recently, a significant part of the whole consisted of Palestinians and other Arabs, among which the youth were particularly noticeable with young women very much to the fore and vociferous. One group of young Arab women shouted slogans non-stop from O’Connell Street to Northumberland Road, where I parted company with them to take up another position and could hear them chanting still as they marched on.

One would hope these youth have opportunities to become organised and gain experience to be leaders of the future.

I brought two flags, a “Starry Plough”4 and one in Palestinian national colours, a friend carrying the ‘Plough most of the time. There was I heard only one other on the march. It is natural and proper that we carry and fly the Palestinian national colours but it seems to me that we should carry indications of Irishness too, to represent Ireland in solidarity with Palestine. This was represented in some placards but flags are more visible and it would be good to see more of them on Palestine solidarity demonstrations.

The Starry Plough flag also aroused interest with many asking what it represented and it was good to be able to tell them that it was the flag of the army of the Irish Citizen Army, the first working class army in the world, one which recruited women and that some of them were officers.

1Prior to last Saturday (15th) the Irish police threatened the IPSC with intervening to stop the march and huge fines for responsible individuals under Covid19 legislation; luckily the Trinity BDS Campaign took on the risk of repercussions and called the demonstration instead. On Tuesday, for a smaller march, the Gardaí kept the Pembroke Road open despite the danger of rush-hour traffic to the crowd, then continually urged demonstrators in towards the Embassy, forcing them into close contact with others and, when this was pointed out to them, just shrugged.

2In actual fact, Far-Right groups seemed to enjoy complete impunity for months as they held rallies, pickets and marches, without wearing masks or socially distancing, including at the GPO, while nearby, people picketing is solidarity with political prisoners and Debenhams picketers were harassed by Gardaí. Also, at a Yellow Vests rally in August 2020 a mob organised by the fascist National Party attacked unarmed counter-protesters with iron bars and wooden clubs while the Gardaí, instead of arresting them, attacked the victims and drove them off the quay with raised batons and violent shoves (see “There Will Be Another Day” article on the Rebel Breeze blog). A few weeks later, the cops allowed members of the NP to attack a handful of women opponents in Kildare Street and to club one of them, then again drove the victims back. On both occasions the Gardaí told press afterwards that there had been no violence but in the second case had to amend their statement hours later and weeks later charge a fascist individual with the assault.

3Under international law, it is illegal for Israel or Israeli settlers to sell products from the Occupied territories in Palestine, since they are even by UN law illegally occupied. However, the products are exported and sold in many parts of the world including all over Europe. The “Occupied Territories” Bill, if passed into Irish law, would make it an offence to import or re-sell products from those territories and would have an economic as well as a political impact. Although the Bill was framed in 2018 and supported by all political parties except Fine Gael, the Government has dragged its heels about bringing it before the Dáil to be discussed and Tuesday’s will be its Third Reading after which, with enough votes in favour, it will become law.