Anti-Water Tax protester leaves Dublin court today at liberty after two months but Gardaí arrest three Pro-Choice campaigners this evening, pepper-spraying at least one of them while held immobile on the ground.

Stephen Bennet was brought from Mountjoy Prison this morning to Dublin Criminal Court to face “Public Order” charges relating to “obstructing” Irish Water vehicles in Dún Laoghaire and Dalkey and refusing to comply with Gárda instructions to desist. The Dún Laoghaire court had imposed conditions for releasing Bennet on bail which included a curfew, staying away from Irish Water vehicles and a large financial surety. Declaring the conditions unreasonable and a restriction on his civil rights to protest, Bennet had refused to agree to the conditions and the judge had taken to jail.

Up to 30 supporters crowded into the court this morning to hear Bennet’s case being tried. There was also a large number of Special Branch Gardaí (political police in plain clothes) and a smaller number of uniformed police. A Garda Sergeant Gilmore from Dun Laoghaire station gave evidence of having confronted Bennet at York Road in Dún Laoghaire, where the accused had been sitting in the road and at Dalkey, where he had been “marching extremely slowly”. Sgt. Gilmore quoted the Public Order Act to Bennet and ordered him to desist but Bennet had declined to comply. Defence Counsel maintained that there was “a reasonable doubt” as to whether Bennet had been in violation of laws initially which would have rendered his subsequent refusal to comply with Garda instructions not an offence. Since there was no question of accusation of breaches of the peace, assault or criminal damage, the point at issue was whether the Public Order Act was applicable. State Prosecution Counsel argued that blocking or slowing traffic was creating “a nuisance”, to which Defence Counsel replied that causing a nuisance was part of the purpose of a protest, in order to make it effective. Sit-down and marching slowly protests had not been tested in Irish law, said Defence Counsel but quoted a number of cases from the European Court of Human Rights at Strasbourg where the Court had ruled in favour of applicants’ rights to protest even when the applicants’ states had found them in violation of their laws and penalised them.

The Judge retired to consider the case and when he returned he found Bennet guilty on all charges and sentenced him to a total of around €800 in fines, in default of which a total of 11 days in jail. One one charge, he sentence Bennet to two months’ imprisonment but, since that was time already served awaiting trial, Bennet was freed to cheers from his supporters, including his daughter Saoirse and his grandson, who had been born while he was in jail.

Belfast mother charged with giving her daughter an abortion-inducing pill

At 6pm this evening a protest took place at the Spire in Dublin in solidarity with a Belfast mother who facing criminal charged for having given her daughter a pill which induces abortion in very early pregnancies. The pill is freely available in Britain and legal there but the 1967 Act which legalised abortion in Britain has not been enacted in the Six Counties. 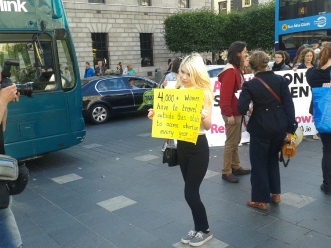 The event had been organised by the Workers’ Solidarity Movement and Real Productive Health organisation in order to express solidarity with the mother and also to link the struggle of women in the 26 Counties with those in the Six, women in both parts of Ireland having to travel to another country, Britain, to avail of abortions and similar protests took place in Belfast and in Galway.

A number of people spoke and soon afterwards some excitement stirred through the crowd and they began to examine the roof of the GPO where something was going on. Very shortly after that a Garda squad car with siren blaring and blue lights flashing tore along O’Connell Street and turned into Henry Street.

People broke away from the pro-choice demonstration and gathered in Henry Street as other Garda squad cars, a motorbike, a cycle Garda and a number uniformed and Special Branch Gardaí on foot poured into the street. The scene was  was somewhat confusing for many but what was clear was that the Gardaí had torn the shirt off one one young man, handcuffed him and put him, stripped to the waist, in a squad car. Another young man was also handcuffed and ended up on the ground with a number of police on top, one of whom pepper-sprayed him while in that position. This action provoked shouts from onlookers and uncertain physical intervention. As a third was arrested and bundled into a police car, the word went around that these were pro-choice demonstrators who had got on to the GPO roof (presumably using the scaffolding to the side of the building) and that they had attempted to display a banner up there.

People gathered around the Gardaí, some of whom threatened to arrest those arguing with them. The Gardaí were then seen to be picking up a banner to put in the back of one of their vehicles when a woman cried sarcastically: “A banner! Oh, thank you for saving us from a banner!” Others joined in shouting: “Bad banner! Bad banner!” amidst other calls from protesters and passers-by generally expressing an opinion that the police action had been unnecessary, repressive and over the top in violence and in numbers. Indeed, the numbers of Gardaí present who had suddenly appeared did suggest to many that they had been kept in readiness to move on the pro-choice demonstration at some point or were aware that some publicity action had been planned. Protesters who attended Store Street Garda station soon afterwards were told that the accused would be charged and released on bail “in a couple of hours”. The wording on the banner apparently had been “ABORTION CHARGES ARE BOLLIX”.

WSM video of scenes at the arrests: https://www.youtube.com/watch?v=iPwZlWYW3kE

WSM Video of the rally just prior to the arrests: https://www.youtube.com/watch?v=cFp_AzsFIa0