The historic ruins of Hasankeyf, which may have been settled more than two thousand years BCE, are threatened by a Turkish dam along with the homes of Kurdish, Armenian and Arab people. A number of archaeologists and historians believe that the fortified town was referred to in inscriptions on the Mari tablets (1,800-1,750 BCE).  The rocky outcrop also contains many human-made caves.

As well as being the site of an ancient town, it is also an urban and outer settled district located along the Tigris River in the Batman Province in southeastern Turkey, with a recent combined population approaching 70,000.

The project that threatens to submerge much of Hasankeyf is the Isilu Dam being built by Turkey. Despite the foundation stone being laid as late as 2006, in 1971it was already being actively considered as one of the sites for a number of dam projects for hydro-electric generation and number of other purposes. A study by an international team between 1980 and 1982 recommended the building of the Isilu dam despite the 1981 declaration by the Turkish Government itself of Hasankeyf as a natural conservation area.

Opposition to the dam

The project had run into funding difficulties over the years. Due to international protests on environmental, archaeological and human rights grounds, and also protests within Turkey and from inside Hasankeyf, a number of international funders backed off. The British Government refused $236 million in funding in 2000 and in 2009, a consortium of Austrian, Swiss and German credit agencies withdrew their offer of $610 million.

The consortium had suspended the loan in 2008 and had given the Turkish Government 6 months to comply with international standards, which they had failed to do. However in July 2010 the Austrian firm Andritz Hydro announced it was lifting its suspension and would provide the six huge turbines specified for the power plant.

Excavations for the main body of the dam began in May 2011 and the Turkish Government projected that all works would be completed this year. A 250m (820ft) permanent steel-girder bridge with concrete supports has been constructed just downstream of the dam and construction of new villages is currently underway. The diversion of the Tigris River began during August 2012. According to Government figures, by April 2014 the project was 60% completed while 73% of the Hasankeyf population had been resettled.

Protests continue within the area, peaceful and not. According to the Government, in January 2015 Kurdistan Workers’ Party (PKK) threatened the lives of workers and anti-Government sources confirmed that a number of workers left the site. On 3 February 2015 a convoy of supplies for the dam was attacked, injuring three persons and several days later a worker was killed in his home, according to the Government by suspected PKK militants. Peaceful protests have included pickets and demonstrations (see photos) and some of these have also taken place abroad, including recent ones in England (see photos).

The completion of the Ilısu Dam will cause the flooding of the ancient city of Hasankeyf and about 185 villages and hamlets will be fully or partially affected by flooding, according to the Kurdish Human Rights Project. From 55,000–65,000 people will be forcibly resettled, says the KHRP, while even the Turkish Government estimates 40,000. According to a statement released on the 24th August by a solidarity group protesting outside the Austrian Andritz company’s facility in England, the completed project will reduce water flow to Syria by 40% and Iraq by 80% and the dam also provides the facility for political control of those areas through further restriction of water supplies. 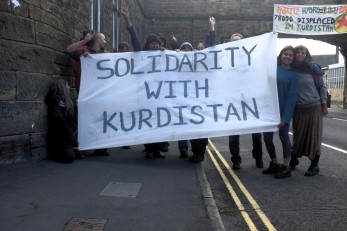 Turkey is a member of NATO and extremely important strategically to the the military alliance, as well as having some significant natural resources. However its regularly-renewed applications to join the EU have always been turned down because of its human rights record, both in the course of recent wars with its ethnic Kurds as well as with regard to protest movements among ethnic Turks. Recently Turkey came in for adverse international publicity again as it was seen to be blocking Kurds trying to get through the Turkish border with Syria in order to defend areas under attack by ISIS (Islamic State), while Turkey has also been accused of more directly assisting ISIS in its attacks. Although the state has Moslem fundamentalist political parties which occasionally come into government, Turkey itself has been secular since it became a republic in 1922.

More information, including photographs on http://www.al-monitor.com/pulse/originals/2013/10/hasankeyf-civilization-condemned-death.html

and about Kurdish human rights http://www.khrp.org