Any hope that the Irish capitalist ruling class and their current government had that people had given up — or even had just got tired of marching — were dashed on Sunday 29th August 2015.

Hundreds of thousands gathered again from far and near; banners were on display from the West, South, North-East and North-West, Midlands, and of course many parts of Dublin and the East coast. 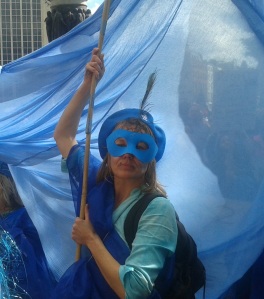 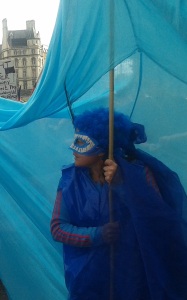 The main march columns started off from two train stations: Connolly Station, to the east of the city and Heuston, to the west. The latter contingent crossed the river at the station then marched eastward towards the city centre along the southern quays while the other marched westward along the northern quays and then crossed the river to the north side further upriver (Essex Bridge) and turned towards the city centre. Both columns had contingents and individuals joining them en route while others went straight towards O’Connell Street, they were greeted by a musical performance from the main stage by Don Baker and other musicians, also a performance by a rapper.

State repression was focused on at times: the Jobstown 23 banner got strong applause from bystanders at various points along the route, another banner denounced Garda violence including pepper-spraying and a number of speakers spoke about Garda repression, including one who talked about the Special Branch opening files on anti-water tax resisters. 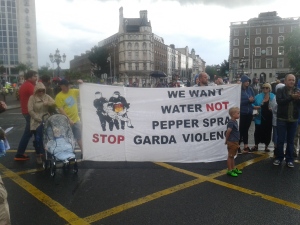 As usual on large demonstrations of this kind, the Gardai refrained from violence or bullying and in fact were in very low profile, in stark contrast to their behaviour and numbers when dealing with smaller numbers in local resistance to water tax and the installation of water meters.

Among the speakers there was of course much mention of elections and getting rid of the current capiltalist government and also statements about the fight for the Republic in history, compared bleakly to the situation in Ireland today with unemployement, emigration, cuts to services, homelessness, privatisation. John Douglas, Gen. Secretary of Mandate and President of Mandate covered many of those issues, including the Dunne’s Stores dispute and the sudden closure of Clery’s in a rousing speech. However, those two are cases in point illustrating the weakness of the Irish trade union movement today: Mandate had one day’s strike in Dunnes’ many weeks ago and have won no gains as yet, while Clery’s managed to sack their workers without the union leading even a sit-in to hold the building and stock as a bargaining chip

A new presence on this demonstration was Belfast Trade Council, who were made very welcome and who had a speaker on the platform. He said that there was no EU directive to tax the water and that in the Six Counties they had defeated the water tax. He was not long speaking when the heavens opened and rain poured down on demonstrators and bystanders alike. 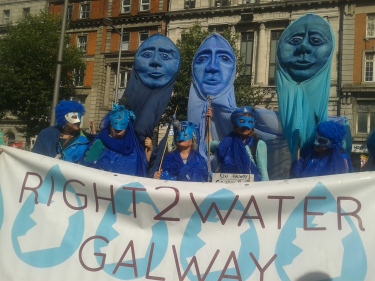 What today showed is a strong will to resist across the country and across a great age spread, but with noticeably lower numbers across the teenage and young adult band, as well as a relatively weak leadership of the movement.

It remains to be seen whether RTÉ and newspapers will give a reasonable estimate of the numbers and coverage or instead do the usual of quoting ridiculously low figures or remain vague about them while giving minimal space to what was a large event, with participation from around the nation, as part of the biggest civil disobedience campaign in the history of this State.


(Postcript: In their on-line report, RTÉ showed a photo of a packed O’Connell St. and said the organisers were claiming around 80,000.  Also, at the Dublin GAA football match of Mayo v. Dublin the following day in Croke Park, attended by Enda Kenny, whose seat is in that county, Dublin supporters unfurled a giant banner of Right to Water).