A most interesting and stimulating lecture was held on Wednesday night at Pearse House in Dublin. Hosted by Misneach, an Irish language campaigning organisation, the lecture was titled “Miotas agus Aineolas faoin nGaeilge” (“Myth and Ignorance about the Irish Language”).

What Colm Ó Broin, who described himself as an Irish language activist, has done is to take a number of frequently-expressed ideas hostile to or dismissive of the Irish language and to deconstruct them, analyse them and compare them with other languages and social situations. For the purpose of the lecture, he took around ten of those ideas, encapsulated in stock phrases well known to Irish speakers and campaigners – and probably to many others not within those categories.

Over the years, we have heard and read these stock phrases and ideas expressed with tedious regularity, for example that the language is archaic or dead, is full of English words, that it is an expensive commodity, that Irish language schools are elitist, that the language is or was badly taught or that it was “beat into” people. Over the years, many speakers and activists have of course countered these ideas, sometimes by reasoned argument and sometimes by a trenchant phrase, such as: “What, was it only Irish that was bet into you then?” or “Was it only Irish that was taught with an overwhelming concentration on grammar to the exclusion of conversation?”

But Ó Broin has gone about this work scientifically, methodically. For the purpose of his lecture he took around ten of these propositions, deconstructed and exploded them, revealing their underlying lack of logic and scientific fact. For example, dealing with the proposition that the language is dead, Ó Broin produced a long list of living languages around the world – the vast majority, actually – that have less speakers than does Irish. On the allegation that Irish is full of English words, he produced pages of English-language words that are of French origin (leaving aside the easier and also huge list of words or Greek or Roman origin).

Having revealed the lack of scientific truth or logic as a basis for hostility or contempt towards the Irish language, Ó Broin turned to psychology as an explanation, finding fear and/or shame as the motivating factor. Turning back to history, he reminded his audience of the Statutes of Kilkenny of 1366, when the England-based descendants of the Norman Conquest of England dating from 1066, attacked the ‘gone native’ customs of the Irish-based descendants of the Norman Conquest of Ireland beginning in 1169 (though Ó Broin did not say so, the English Normans had gone quite ‘native’ themselves by then, integrating with the Saxon nobility and the Statutes were written in English, not French).

The Statutes forbade the Irish Normans (“the degenerate English” who had become “more Irish than the Irish themselves”) from playing Irish games and music, speaking Irish, submitting themselves to Irish law, adopting Irish cultural and social customs including marriage. It was the coloniser’s fear, fear of the Irish-Normans losing their allegiance to the English Crown, that was at the heart of that hostility.

Since the Irish who oppose the Irish language cannot be said to be “the coloniser”, something else must be at work there. Ó Broin twice in his lecture called on the state-funded or supported Irish-language organisations Foras na Gaeilge and Connradh na Gaeilge to undertake social research into what is behind this attitude among large sections of the public (according to opinion polls).

This would of course be useful work, especially if it led to the production of measures to counter such myths and ignorance. It is likely however that the answer has already been supplied, by for example the work Patrick Pearse (1879-1916) and Franz Fanon (1925-1961), though it would be useful to have more up-to-date validation. Fanon’s work focused on the coloniser’s view being culturally and psychologically internalised by the colonised individual and society and Pearse focused more on the mechanisms by which that was done through the educational system run by the coloniser. The idea is expressed succinctly, though in a different context, in the words of a popular nationalist song, Memory of the Dead by John Kells Ingram (1823 – 1907):

“He’s all a knave or half a slave

who slights his country thus …”. 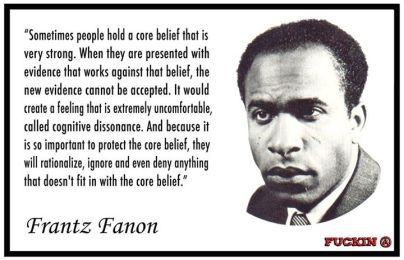 The lecture was delivered by Ó Broin in Irish to an audience that contained Irish speakers and presumably all present could at least understand the language. My feeling was that this research and deconstruction needs to go out to the non-Irish-speaking public in this country. In response to a question, Ó Broin replied that he had in fact written some of it in English some years ago and that material had been posted on a website that no longer exists. Currently, his work exists only in Irish. It is to be hoped that he returns to putting this work out there among the people who perhaps most need it.