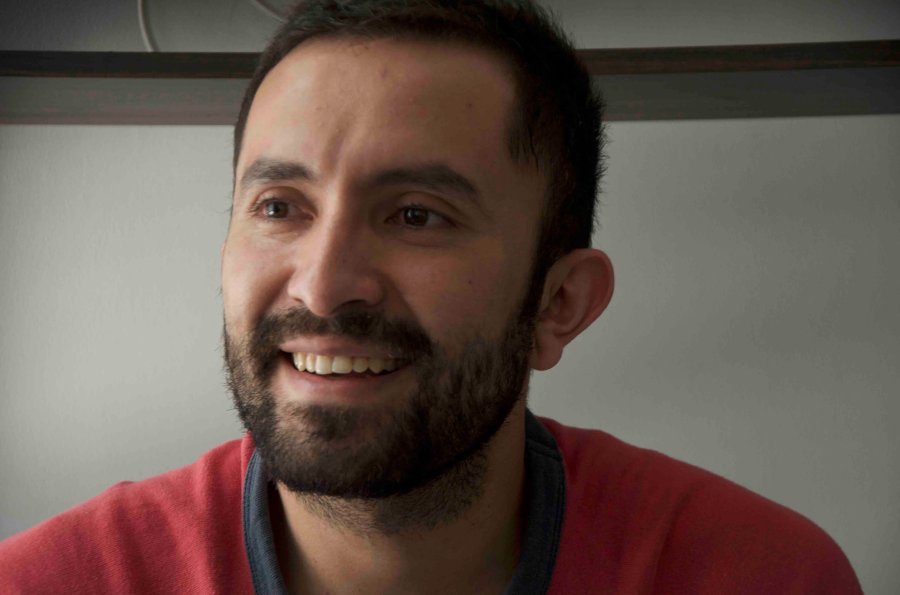 Iván Ramírez was the last of those arrested for the Andino Case to be freed by the Colombian authorities after spending almost four years arrested as part of the legal frame up.  I spoke to him a number of weeks after his release.

Iván graduated from the National University as a sociologist and before his arrest he worked for the National Centre for Historical Memory (CNMH) as part of an accord with the official German international aid agency GIZ.  His work consisted of carrying out workshops to collate information on the murders and massacres committed against members of the Unión Patriótica in the department (administrative area) of Meta in order to build a Memory Centre in the city of Villavicencio.  This centre was never built and when his house was raided the Police took various files collected as part of his work.  He also worked on the issue of the infamous Massacre of Trujillo, carried out by the Third Division of the Army whose boss, not to say capo, Manuel Bonnet Locarno would become the highest commander of the State’s armed forces.  There was a chance of continuing to work with this body, but his arrest put paid to any hope of a new job with them and he went on to be part of another nefarious chapter in the Colombian State’s war on its own people.

“At that time, I didn’t think about it, but neither was I unaware that the activity I was engaged in — e.g. academic or professional life — could have certain consequences.  Well, looking at our national history and context, you realise no one is immune from ending up in prison or being murdered for political reasons.  So I never thought I would end up being part of a judicial frame up.  Obviously in the context that one looks at the background and cases of other people that were also sociologists who had been victims of frame ups, well it was always possible, but it wasn’t on my mind.“

Prior to his arrest, two of the people he had known in Meta in the context of his work with the CNMH were murdered.  Little did he know that in a short time he would go on to be part of the sad story of the dirty war against social fighters and the judicial frame ups.  Neither did he know that documents related to his legal work with a state body would be presented in court as evidence against him.  Almost every researcher of the Colombian conflict has a copy of the report ¡Basta Ya! (Enough!) published by the CNMH.

It was not the only document that they took from his house as evidence.

“There were also texts on the history of the insurgencies that are also academic works in Colombia and in the hearing they were introduced, as propaganda texts when when they were really academic documents and there was one on the Quintin Lame armed movement which was also published by the National Centre for Historic Memory.  They are publicly available documents and as a professional you have to study them.“

A prosecutor has to be really stupid or desperate in the face of the weakness of his case to introduce such documents in a trial.  Amongst the credits for these documents are the name of ministers and high-ranking politicians such as Germán Vargas Lleras, Angelino Garzón the former Vice-President of the country and the publication was financed by the European Union, the Spanish Embassy and the official wing of the US government USAID.  It would seem that the Prosecutor saw subversives everywhere.  Though it should be pointed out that this type of manoeuvre is common and there are many cases where the prosecutors introduced widely published books as evidence.  It would seem, on occasions that the prosecutors have not even read the Penal Code, less still would they read literature or sociological texts.

The evidence against him was not the only farce, his arrest seemed like an episode of Key Stone Cops.

“I was arrested four times.  The first time was in Bogotá on public transport. I was going to meet my partner at some workshops she was doing to start working at Compensar.  I was in a public transport bus at about four in the evening, I was going towards the centre.  I was in the bus and some motorised cops stopped the bus.  They took three people off it.  They asked for our I.D. and they gave the I.D. back to the two others and let them go.  They detained me under the pretext that I was supposedly a burglar.  There was a white van behind the bus and one of the cops told me to get into it and that my accomplice was in it. When they opened the van, there was a very suspicious looking guy inside and the first thought that went through my head, was that they are going to do something to me, kill me or disappear me.“

He didn’t want to get in the van and told the police that he didn’t trust them, but even so, they took him to the Police Station as a suspected burglar and moved him from one place to another at all times as a suspected burglar.  At last they took him in handcuffs to his apartment, whilst they interrogated him about his family.  When he got there two secret police officers turned up to search his home.

“They went into the house and went through absolutely everything.  It began at 7.30 P.M. and lasted till 2 A.M.  It was an irregular procedure, when house searches are carried out after 7 P.M. there must be a representative of a supervisory body present and there wasn’t.  In the preliminary hearings, I was freed due to the illegal nature of my arrest.“

He went to Sasaima, a county in Cundinamarca, near Bogotá, seeking some peace and quiet, but the nightmare followed him there and he noticed the presence of plain clothes police following him and hanging around the town, which made him anxious as the difference between a plain clothes police officer and a paramilitary is one of opportunity and convenience.  In this second arrest he was presented to the media as the worst terrorist.  He was called alias The Taliban (1), perhaps a reference to his physical appearance or a play on words with his name, but as they later acknowledged this nickname was invented by the police themselves, but it was not the only stupidity in  the case.  When he shaved, this was presented as evidence of his presumed guilt by trying to change his appearance.  The process against him is a complete farce from start to finish.  But as a result of it he spent almost four years in prison and during his imprisonment his daughter was born and he could only see her during normal visits, once a fortnight.  The searches and treatment were the usual ones, a Colombian prisoner receives no special treatment for being the father of a newly born child, “to them, even if the person is blind or is paralysed in 90% of their body, they are just another prisoner”.

As a sociologist Iván well understands the problems of the country and the rampant inequality.  His experience in the prison confirmed that.  He saw the luxuries enjoyed by some and the poverty of others depending on the wing they were held on.  When he was in the Modelo Prison, for reasons unknown to him, he was transferred to Wing 3.  There he saw another prison world.

“You see how people with money live inside the prison with lots of privileges whilst there were other prisoners who had nowhere to sleep, they had to make do with cardboard, no food.  On Wing 3 there was a lot more space and a library, it was impressive, a very good coffee shop and very good workshops.  There was a good gym, it was big with gym machines, not just free weights and ovens to cook with.“

CAPITALISM WITHIN THE JAIL

Of course, on Wing 3 there were various high level prisoners, from the Odebrecht case (2) and also from Interbolsa (3).  It could also be seen in that some of the cells cost up to 12 million pesos (3000 euros), in addition to the monthly rent.  Property speculation takes place inside the walls, especially where there are prisoners of that ilk.  Capitalism doesn’t stop at the gate, but rather it reproduces itself within the prison system.

Iván was the last one to be freed.  As happened with the others the Prosecutors sought out judges in their pockets to justify the unjustifiable, and between those manoeuvres and the lethargy of the prison service in obeying orders, he was imprisoned over and again without ever really stepping out into freedom.  In one of his rearrests a Prosecutor from Popayán legalised his arrest in a court in Medellín when the criminal case is in Bogotá and then they applied a law passed after his first arrest and the events.  Although he did hold on to some hope, he knew that in Colombia many judges are not objective and don’t always make findings in law, causing him to despair, as happens with many prisoners in the country, who are unjustly imprisoned, at the mercy of the whim of the judge on duty, or as happens with many, they lack the money to hire a good lawyer.

After his last rearrest Iván did not go back to prison, instead he was held for various months in a Police Station, a place of detention which is supposedly temporary, although there are people held in them for up to a year or more, in places like that where the conditions of imprisonment are worse than in the jails, if that were possible.

“In that Station, overcrowding was at 100%.  For example, in the cell I was in, it was very small, about 3 x 8 metres, or something like that and there were more than 100 people held in difficult sanitary conditions, you had sleep on top of each other and you couldn’t stretch. You spent the day sitting down, there was no way to walk or exercise.  The food was also rancid and you had to eat it.“

His view of a certain class of prisoner changed having seen how some of them also fought for their dignity.  “The kid who sells drugs, the bloke who robs buses and others, are sometimes classed as worthless people, but it is simply the circumstances that bring people along a different path and that shouldn’t be judged but rather understood in all its complexity.”

Iván, the sociologist lived through a field work on the injustices of the legal system, the dirty war in Colombia, poverty, inequality that no one wants to go through.  His passage through the halls of injustice have not quenched his thirst for knowledge and like his fellow accused in the Andino Case he continues to be committed to a better future for this country.

2. An international case of corruption involving a Brazilian company and construction projects throughout Latin America. On the Colombian case see (Spanish only): https://www.elespectador.com/noticias/judicial/los-hechos-claves-para-entender-el-escandalo-de-odebrecht/?fbclid=IwAR3CnKdgk1437318wa9quFgglqjpDq0j-8KJxjqm5j_p6rBcCVJ7pt7wT8I

3. Yet another financial scandal. https://noticias.caracoltv.com/informes-especiales/impunidad-la-otra-pandemia-que-paso-con-interbolsa-las-libranzas-y-otros-escandalos-de-corrupcion?fbclid=IwAR0TevfujBMdbWRUKsczbYrykP3J_bFf5aHH0xi5IWDP-5ACrfrv3dFqgwQ