Ukelele, fiddle, guitars, cajón, gralla, flutes and uileann pipes, along with different voices in various styles filled performances at the Trad for Catalonia night in the Back Room, at the Cobblestone pub, Smithfield Dublin on 14th June (2018). Despite the wide variety, the quality of sound production was excellent and much appreciated by the audience.

Eight different acts took to the stage in a crowded function room at the Cobblestone, which was decorated in the three varieties of the Catalan national flags (Senyera, Estelada and Vermella), and flags from the Referendum period declaring Sí, along with the Basque Ikurrina and the Irish Starry Plough.

Ó Ceannabháin then introduced Berta Freixas Ylla-catalá, who played some Catalan tunes on the Gralla, a traditional Catalan instrument after which Paul O’Toole followed with some of his own songs, including the quasi-satirical “I Saw Jesus on a Bus”. 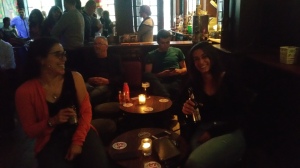 Breatnach, accompanied on guitar by O’Toole, sang two songs relating to prisoners, both from the latter half of the 19th Century, one from Ireland and another from the USA. The

Felons of Our Land was almost certainly written with regard to the suppression of the Fenians (Irish Republican Brotherhood) he said, while How Can I Keep from Singing began life as a Christian hymn but was worked over somewhat in the 1960s to make it a song of political resistance. The two emotions which the repressive forces seek to employ by taking political prisoners as hostages, said Breatnach, are shame and fear; these songs counter those with the emotions of pride and courage. Breatnach invited the attendance to support a picket in solidarity with Catalan political prisoners the following Thursday, 6pm at the GPO building in the city centre.

After the break and the holding of the raffle, which raised further funds in addition to the low entrance fee of 5 euro, Síomha Nic Aonghusa sang voice-only the sean-nós song Dónal Óg in Irish, then, all in English and accompanying herself on guitar, sang in turn an Irish Republican ballad and different songs, on themes of love, loss and addiction. Fionn Ó hAllmhain brought his uileann pipes on to the stage and, after explaining something of how they work, played a number of tunes, including a polka which had a couple up dancing set-dance polka moves. Ó hAllmhain also sang an Irish sean-nós song.

Oncle Pau of Casal Catalan, accompanying himself on ukelele, performed some Catalan songs which had many Catalans in the audience singing along, finishing his set with Somewhere Over the Rainbow.

Concluding the evening, Ó Ceannabháin thanked all for attending, also the singers and musicians who performed free of charge, the Cobblestone for providing the venue, Shane the sound engineer and Aoife behind the bar.

The event was organised by With Catalonia/ Leis an Chatalóin, with strong support from the cultural Catalan organisation, Casal Catalana d’Irlanda and promoted also by CDR (Comité de Defensa de la República) Dublin.

With Catalonia/ Leis an Chatalóin

One thought on “Trad for Catalonia Fundraiser in Dublin a Success”