Protesters calling for the urgent construction of public housing marched through Dublin today. Various organisations and many independent activists took part in the protest with a broad range of people took pat, from socialist to republican-orientated, some with their children. The event was organised by the National Homeless and Housing Coalition.

On their Facebook page, the NHHC had issued a statement, part of which read:

“Rebuild Ireland has been an unmitigated disaster yet the cross party motion that was passed in the Dail in October that called for practical actions that would end the emergency, including making it illegal to evict someone into homelessness, were ignored by the government even though it was supported by all parties except Fine Gael. We are demanding action on the motion.

“We also learned that 15 Dublin hotels received over €1m each in 2018 for accommodating homeless families which further illustrates the reliance on the private sector. These families need public housing built on public lands, they need proper homes. Last year there were 842 cases of children being discharged from the Temple Street Emergency Department back into homeless emergency accommodation. The majority of these cases were a direct result of the fact that these children are living in completely unsuitable and cramped emergency accommodation.”

The march, though far from small, seemed somewhat smaller than expected which may have been due to a cold windy day with lashing rain a little earlier in the day but may also have had another cause. The Coalition of groups has split with ICTU (Irish Council of Trade Unions) and a number of NGOs pulling out to form a different campaign on housing, apparently declining to support the demand for public housing on public land.

The organisers of today’s march published a list of demands:

• Declare the housing and homelessness crisis an emergency.
• Provide a minimum of 10,000 public house a year. No to privatization: build public houses on public land.
• Make housing a constitutional right.
• End evictions, bank repossessions and sell-offs to vulture funds.
• Create a national Traveller accommodation agency to oversee and deliver Traveller Accommodation.
• Legislate for real security of tenure, real rent control and affordable rents.
• End the use of B&B’s and hotels for emergency accommodation. Improve emergency accommodation facilities and provide security for all in need.
• Create rent pressure zones for Purpose-Built Student Accommodation (PBSA). Ensure tenant’s rights for students in PBSA and digs-style accommodation. 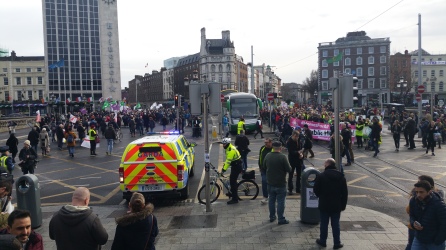 One group set off from the GPO and after making a circuit on O’Connell Bridge, marched along the north quays, meeting up with another group coming across Butt Bridge to join them from the Housing Agency HQ; apparently another group had marched from City Hall. The march continued on to Samuel Becket Bridge, to the bemusement of some participants, where the participants halted and were addressed by a number of speakers.

Along the route of the march, slogans were shouted, among which were:

“Raise the roof, not the rents!” and “Housing is a human right!”

As well as Socialists, a number of Republicans were in evidence, marching without party banners. Sinn Féin supporters had a banner and party flags, as did People Before Profit and the Workers’ Party. Some Union of Students in Ireland flags were in evidence too. A Travellers’ group and some community groups also carried banners identifying their group with the march and its cause.

Report by Irish Times, with video including interviews with participants: http://https://www.irishtimes.com/news/social-affairs/thousands-march-in-support-of-homeless-in-dublin-1.3820626?fbclid=IwAR2aW9yLVjHbTrJ9kbb21MEHOl3R8llbRhy3GFeX8NvkGLtdjH69TF9fQxc&mode=amp