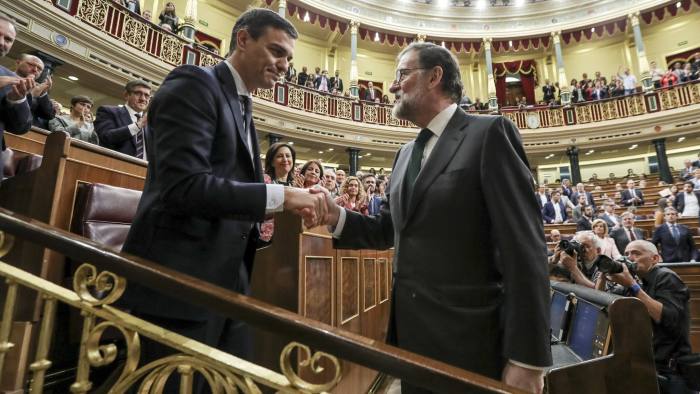 Newcomers to Spanish politics witnessing the recent sound and fury in the Spanish Parliament might conclude that there was a real battle going on between a reactionary Right and a progressive Left but they’d be right only about the existence of a reactionary Right. The same newcomers might then remark that well, the opponents of the reactionary Right must at least be liberals and they’d be wrong about that too.

Parliamentary delegates from the reactionary Right – and that is to call them much less than the reality – were sharply criticising the Spanish coalition Government. The senior partner in the coalition is the Partido Socialista Obrero which, as has on occasion been commented, is neither “socialista” nor “obrero” and while its junior partner Podemos has left-wing credentials coming from the mainly Trotskyist (and Communist Party-managed) Izquierda Unida, it has to keep up an accommodation with the PSOE.

The parties of the Right in this case were the Partido Popular, which was created to represent erstwhile supporters of the deceased fascist dictator General Franco, along with Ciudadanos, which was founded by former supporters of the PP. The fascist Vox party comes from the same stable but with less democratic pretence.

The criticisms of the Spanish coalition Government on this occasion were mostly with regard to the sacking on Monday of the chief of the Guardia Civil in Madrid, Colonel Diego Perez de los Cobos. The Guardia Civil is a paramilitary police force, which is to say it is organised along military lines and has been the main instrument of State repression during Franco’s dictatorship (1939-1975) and since. It was mainly they, for example that invaded Catalonia to beat up voters during the October 2017 Referendum on independence there and shot the banned rubber bullets at demonstrators and in fact the sacked officer led that operation.

The sacking occurred allegedly because on behalf of a Madrid magistrate, the Guardia Civil carried out an investigation of a number of political demonstrations in Madrid which it alleged had violated the pandemic restrictions and even contributed to the spread of virus, even though they had predated the Lockdown. The investigation, it is also being alleged, was in order to check whether the Health Minister’s actions regarding the pandemic had been appropriate or not.

In order to bolster their investigations, the Guardia Civil had claimed that the World Health Organisation had declared a pandemic in January whereas in fact it had only done so on March 11th (the Government ordered the lockdown on the 14th). The public events the Guardia Civil were investigating with a view to prosecution were mostly democratic or left-wing, including a march to celebrate International Women’s Day (March 8th) and to denounce male violence against women (and the State’s two-level crime of rape) but also included a cavalcade organised by the fascist Vox party.

The Right generally is no friend of women’s rights but more to the point feels duty-bound to defend the Guardia Civil, acting as though they own it (which is not that far from the truth). However the PSOE has had no difficulty in sending the Guardia Civil to attack the Basques or Catalans in the past. And while in government in the 1980s, the PSOE’s Minister of the Interior along with some senior police and Guardia Civil officers were exposed running the GAL terrorist group against the Basques and had to spend some time in jail. The person widely suspected of having set the whole thing up, the Prime Minister Felipe Gonzalez, was not even questioned by the investigators, no doubt for fear of what might come to light.

That Fernando Grande-Marlaska is the Minister of the Interior under current attack in Parliament for allegedly being unfair to the Guardia Civil points out in full the irony of the situation. This is one of the Judges of the Spanish National Court most denounced by Basques for attacking their democratic rights and of at least turning a blind eye to their torture, while sentencing them to long terms in prison on the basis of their “confessions” and Guardia Civil “evidence”. Another of those ex-judges considered infamous by many Basques is also of the PSOE, Baltazar Garzon, beloved of many left and liberal people because he agreed to process an international crimes against humanity accusation against Pinochet and also ordered the exhumation of a mass grave of victims of fascists and military (Spain has more mass graves than any other territory except Cambodia). Neither of those two cases came to fruition, unlike the violation of the civil and human rights of thousands of Basques and the torture of hundreds under his watch.

In the Punch & Judy traditional dramas, Punch carries out a murder or two but, unlike some of the children watching it perhaps, we know that the puppet performance is not describing a real event. Of course, the Right in the Spanish state DID carry out murders – they have a list of 100,000-200,000 to their ‘credit’, most actually after the fighting of the Spanish Anti-Fascist War. And an additional number to force through the Transition to nominal democracy and more afterwards by ‘unofficial’ GAL and official Guardia Civil operations, mostly against Basques.

The historic fact is that all left-wing organisations, even the social-democratic PSOE were banned during the Dictatorship. In order to stabilise the State and prevent its overthrow by the oppressed masses during the mid-1970s, it had to have the help of the Left. The Partido Comunista de España controlled a huge militant illegal trade union organisation, the Comisiones Obreras, while the PSOE controlled the smaller but substantial Unión General de Trabajadores (which it does still) – no setup would be safe unless they were brought on board. They were legalised and supported the new Constitution, even accepting the imposed monarchy and the “Pact of Amnesia”, under which all those guilty of tortures and murders under Franco walked free.

This is why there is some heat in the exchanges in the Spanish Parliament but no substance. The thinking of the Right goes something like this: “We had to legalise you and allow you into government but that doesn’t mean we have to even pretend to like you.” While the PSOE thinks: “You tortured and murdered our grandparents but we will share power with you and tolerate much of your antics. We all depend on one another. But sometimes you go too far and have to be restrained. For your own good as well as ours.”

And what does Podemos and Izquierda Unida think, while they share a government with the PSOE? And does any of this make any real difference to the situation of the mass of Spanish people or to those nations imprisoned within the state?

4 thoughts on “PUNCH AND JUDY SHOW IN THE SPANISH PARLIAMENT”