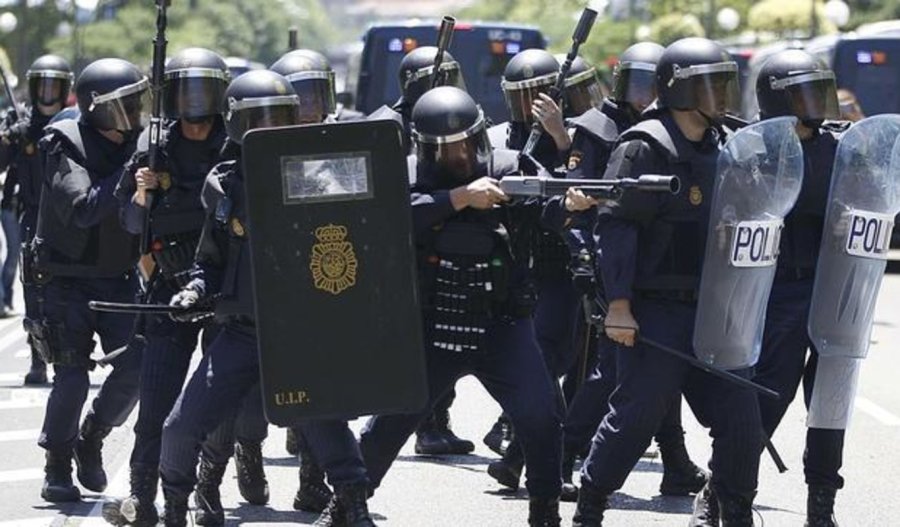 Translated and compiled by D. Breatnach

After his teenage daughter was clubbed by Madrid police on Wednesday last, Angel Barrancos sent a tweet to the Madrid police that is being retweeted extensively in the Spanish state. His daughter’s injuries followed a Spanish police charge on a large demonstration in solidarity with the Catalan prisoners and calling for fundamental changes in the Spanish state as a whole.

“Hi, Police! I was in the Madrid demonstration today and your sons of bitches colleagues of the UIP (mobile units of the Policía Nacional – Trans.) laid my daughter’s head open. Note my name well. I’m coming after you. I used to respect you – no longer. Now I am going to the hospital – you’ll hear from me later.”

“Shit police! The girl is 16 years of age, is 1.60 meters high and weighs 40 Kg. She is a young person in solidarity with those of her age. She must have surely been putting your lives in great danger. I am going in a taxi to the hospital, Samur (the ambulance company) cannot carry all the wounded!!! Beware!!!”

“The CTC scan ok, baton blows to the body and some stitches to the head. Thank you those who have taken an interest and my condolences to the inhuman fascists who have written barbarities, I will respond to you …. you do not deserve my time.”

One of the reporters covering the events, Alicia Armestro of Kaos en la Red, alternative Internet news media, was attacked by police and her equipment thrown into the air. She sent a brief report on the event and a video of the start of the police charge before going for treatment and recovery of her injuries.