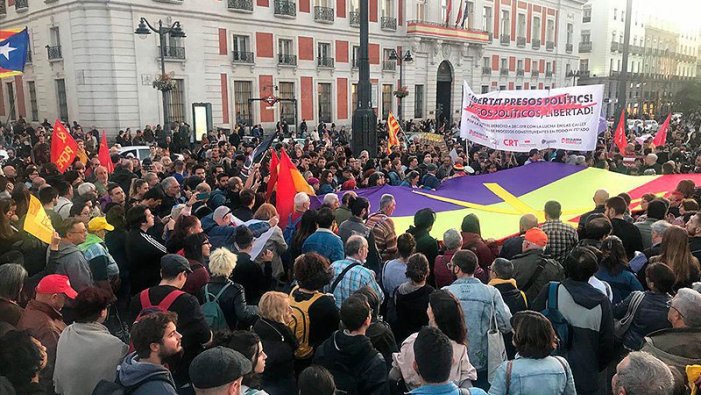 (Reading time: 3 minutes (not including video))

A Catalan solidarity demonstration of thousands in Madrid, in the big central square called Puerta Del Sol, shouted for “freedom for the political prisoners” and declared that Catalonia’s struggle was theirs too. A small crowd of Vox and smaller fascist groups tried to disrupt the rally but were repelled and the crowd turned towards them chanting: “Here are the antifascists!” (daring the fascists to come forward). Later, Spanish police charged the solidarity demonstrators and some running battles took place in the city’s streets.

There are two Spains – one of them is the Spain of an imperial and racist history, of expulsions, of plunder of colonies, of repression at home and abroad, the Inquisition, military-fascist uprising against an elected government, mass executions, rape and plunder, four decades of fascist dictatorship, followed by another four of a fake transition to democracy. That is the Spain that is in power now.

The other Spain is the one of popular resistance to exploitation of the Comuneros, the anti-feudal writing of Cervantes, the struggle against the military-fascist uprising supported by Nazi Germany and Fascist Italy, the mounting resistance to the Dictatorship that forced the ruling class to change their style of management, on the face of it ….. That Spain had largely been beaten, jailed or shot in to silence, crushed by treason and division and hopelessness. But there were always embers, embers that burst into little flames from time to time, not only in the nations of the Basque Country, where a fire burned for two decades, or in Catalonia, or Galicia …. but also in places like Asturias in the north, Andalucia in the south and in Madrid itself, in the centre.

The struggle of Catalonia for independence and against fascist police and judicial repression, is waking that other Spain and calling her to the fight. Waking her latent anti-fascists, her democrats; waking those who are unemployed, in precarious jobs, fighting to hold on to their homes or being evicted; waking its youth who want a better future.

It is the opposite of what was wanted by the Falangists, Vox, Ciudadanos, the Partido Popular, the Monarchy – all of them heirs of the fascist dictator Franco – and the PSOE, which climbed aboard with them. These have railed against the Catalan independence movement in order to distract the people from their real problems and real enemies. In Andalucia, Vox and Ciudadanos joined forces to oust the corrupt PSOE government and to progress towards a fascist regional government. In Extremadura they moved towards the same objectives but fell out among themselves.

But recently both those regions have seen courageous people take to the streets, proudly declaring solidarity with Catalunya. And Madrid on Wednesday saw another part of that awakening. A Catalan solidarity demonstration of thousands in Madrid, in the big central square called Puerta Del Sol, shouted for “freedom for the political prisoners” and declared that Catalonia’s struggle was theirs too. And chanted that “Monarchy is filth!”

“The Spanish Government – and also other spokespersons of the parliamentary ambit – is calling for respect for the judgement (ie againts the Catalan activists – Trans.). The judgement is not respectable, neither in its genesis nor in its conclusions and therefore cannot be respected,” declared the conveners of the solidarity protest.

“That is why this evening we are holding this assembly for freedoms, for democracy and against repression,” declared one of the speakers at the event. “And for that reason we salute and send all our internationalist solidarity to all the people who these days are coming out in various parts of Catalonia, especially to those who have suffered repression, with blows, arrests or in addition once again, a person has lost an eye through the brutal and illegal use of rubber bullets.”

A young woman spoke “on behalf of the youth of Spain to the youth of Catalunya”, saying that their struggle was waking up that of the Spanish, against unemployment, precarious employment, against fascism and the Monarchy.

She said that the democratic parties and trade unions needed to decide whether they were on their side in that struggle or on the others. The young woman read out a long list of organisations supporting the Madrid demonstration and ended with the call, in which all joined in: “Catalunya, listen: Your struggle is our struggle!”

SOURCE (report on the Madrid demonstration and video):