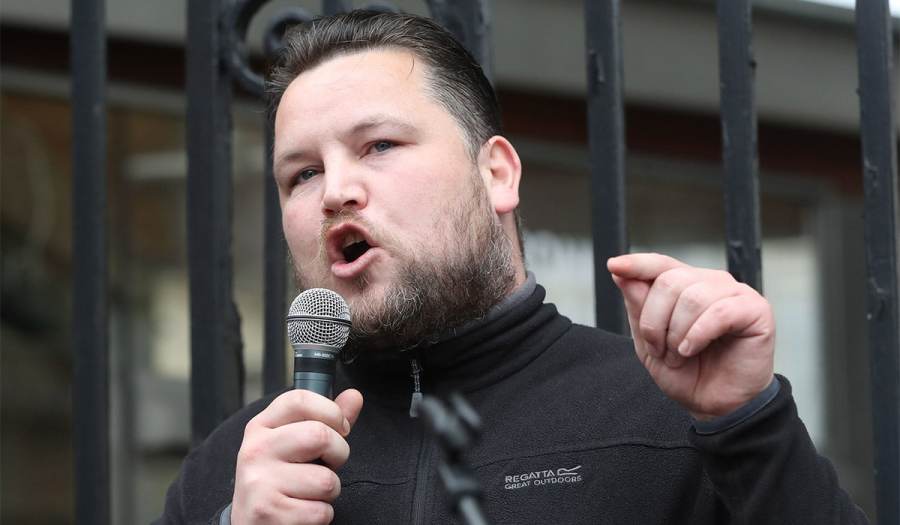 The enemy surely fooled ya …..

Ya looked so queer, I shed a tear —

John Connors I hardly knew ya!

Sad it was to see John Connors speaking at a Far-Right rally outside Leinster House yesterday; sad not only because he gained some fame as a dramatist and the fascists will use that to their advantage but sad because John also stood up for one of the most discriminated-against group in Ireland, the Travellers, of which he is himself a member.

Now I’d be far from saying that the Irish Republican or Socialist movement has a great record in combating anti-Traveller racism but surely their record is far better than that of the Far-Right? But the Far-Right calls all us Republicans and Socialists “pedophiles”, and claims we are paid by a foreign millionaire. These are the new friends of John Connors – at least as long as they can use him, because they are certainly no friends of Traveller rights.

I do not claim to have been hugely active against anti-Traveller racism but I have opposed pubs and shops with “No Travellers” notices and wrote against that discrimination during my brief sojourn at the University of Limerick. I don’t remember any right-wing people agreeing with me then – quite the contrary. When the IBRG took up a stance against anti-Traveller racism in Britain and supported the campaign for halting-sites, it was right-wing British (of the type of UKIP today and others – but more about later) and right-wing Irish who opposed us.

Among those at the Epsom Derby years ago to support Roma people being threatened with removal by police, I didn’t see any of the Right and most appeared to be more of the “Far-Left” (sic) – Anarchists, in fact.

I have never heard before yesterday of the Right, whether Far or more “moderate”, giving Travellers a platform to proclaim their cause. At one of the Connolly Festivals, I think it was two years ago, I and Paul O’Brien were glad to be a support act for John Connors at the New Theatre, as singers and musician (Paul) performing songs about (and by, in some cases) Travellers and against racism, before Connors gave his talk. Needless to say, no Far-Right there either.

Mention of singing reminds me that I have attended two festivals of Traveller culture where I also sang. I didn’t see any of the Far-Right there – all the non-Traveller people there were Republicans or Socialists, as far as I could see. John Connors sang a song there too. No great singer, as he has said himself, but far sweeter to listen to singing than to hear him speak at a rally organised by some of the most backward forces in Ireland.

I heard a recording of a little of John’s speech and at the beginning, he spoke against the refusal to two young women, who wanted to speak against sexual abuse, of speaking space by the organisers. Well they might! For these campaigners for “free speech” (another of the false flags of the Far-Right) try to stifle every voice with which they do not agree and, when they cannot stifle it, to smear it. And fair play to John for saying they should have been listened to. But who spoke from the platform after John Connors’ shameful appearance? Herman Kelly, former Assistant Editor of the Catholic Herald that for awhile defended the Catholic Church against accusations of sexual abuse, claimed they were “fake news” and helped to cover them up!

In institutions run by that organisation, the Catholic Church, there occurred the highest and most concentrated incidence of not only physical and emotional abuse but also specifically sexual abuse. And most of that sexual abuse was of minors, boys and girls – in other words, pedophilia.

When denunciations of that abuse began to surface, from where did the support of the survivors and demands for inquiry and restitution come? Not from the Right, who fought tooth and nail to defend the Church! No, it was from the Left and basic democratic people that call came and also support for the survivors. Oh but now that the defenders of pedophiles wish to attack us, they label us pedophiles! Like Herman Kelly, they can change their false flags when they wish.

One of those false flags is that of “patriotism”, strutting around under the Tricolour and the “Irish Republic” flag, ignorant and uncaring of the history of those specific flags and of those who fought under them. Herman Kelly is an “Irish Patriot”, he tells anyone who will listen, especially if they don’t remember that he managed publicity work for UKIP, the British Far-Right and full-of-fascists organisation run by Nigel Farrage. Kelly also shared a speaking platform with Jim Dowson, a rabid Ulster Loyalist and British fascist.

As for the other “patriot” notables of the Far-Right, Gemma O’Doherty, John Waters, Ben Gilroy, Glen Miller, Justin Barrett, Rowan Croft and Niall McConnell, when have they campaigned to defend the Irish language? Or against the British Petroleum pipeline in Erris? No, that was Socialists and Republicans. Well then, for the unification of Ireland and expulsion of British imperialism? No, in fact some have openly colluded with Loyalists and another is a former British Army soldier, late of Afghanistan invasion. For the defence of our natural resources, against the privatisation of public services, often to foreign companies? Have we seen them defending Irish heritage sites against property speculators?

None of the above, these ‘patriots’. Ah, what a fine company John Connors has chosen to join!

It would have been thought, coming from an ethnic group so badly treated, that John Connors would refuse to consort with racists, yet racism has been one of the main planks of the Far-Right. They spread the “Replacement Conspiracy” lie, that of “EU plans to replace Irish people with migrants”, which Herman Kelly is on video endorsing. They have campaigned against the admittance of migrants and asylum seekers. Gemma O’Doherty and Justin Barrett even objected to the election of the current Lord Mayor of Dublin on the basis that her parents come from China. Barrett said he would remove her citizenship if he got into power – to threaten that to a woman born in the Mater Hospital, raised and educated in Ireland goes even beyond racism and into straightforward nazism.

Of late, some of the Far-Right people, such as the regular speaker at the Stand Together rallies at the GPO during the height of the Covid19 pandemic (insisting the virus is all a hoax) have claimed to be anti-racists. Yet a number of their “peaceful” militants there strut up to their opponents demanding “Are you Irish?” and have been seen supporting Gemma O’Doherty rallies. One of these “peaceful” supporters recently attacked a Republican who was sitting down at the time before the aggressor was escorted by Gardaí (without arrest) back to his own lines.  Some also tweeted that their rally on Sunday was attacked by opponents, while actually the truth is that the tiny band of counter-protesters were attacked by supporters of the rally, as can be seen from photos and videos of the event.

Now, to the nub of the matter, the real reason for that Far-Right rally (apart from recruiting fascists in secret): homophobia. Nothing less than fear and hatred of homosexuals under the guise of hatred of pedophiles. Pedophiles exist and I suppose can be of any sexuality, gay, heterosexual, bisexual and maybe transexual but somehow it is gay men that are mostly accused of it. I have no interest in supporting either Peter Thatchell or Roderic O’Gorman as politicians or political activists but that is not the reason they are being attacked. This is the background being used by the Far-Right: Over two decades ago, Thatchell wrote a letter to the Guardian in which he defended instances of sex between adults and minors in some societies, though he also said he did not advocate it. Thatchell is, among other issues, a prominent campaigner for rights of gay and lesbian women, chiefly active in Britain. Some years later he apologised for those remarks and repeated that pedophilia could not be condoned.

O’Gorman, who is a gay man, welcomed Thatchell to a Gay Pride march once and posed for a photograph with an arm around Thatchell.

That apparently makes O’Gorman a pedophile? No, in the eyes of the Far-Right, it makes him a useful target, for O’Gorman is a Minister in the new Coalition Government, and part of his portfolio is children. So now the Far-Right, who have not only consistently opposed equal rights for any of the LGBT community but even their decriminalisation, have the false flag of “defending our kids” to wave and to whip up a hysteria that has nothing to do with the real problem of pedophilia or the other real problems of our society.

They didn’t do much “defending our kids” from the Catholic Church, of course. Nor did the Loyalist friends of Kelly and others when the British were using Kincora House to entrap prominent Protestants, including politicians, for blackmail about the pedophilia there.

As a society, we have overcome a lot of misconception an prejudice about LBGT people but there is no reason for complacency. Dark forces continue to exist and to manipulate the opinions of the credulous whenever they can. Already they have raised the old slur of pedophilia against the LGBT community and also, a newer one, against all antifascists.

And LGBT people among Irish Travellers, who have suffered not only oppression in society at large but also within their own ethnic group, will find their lives now that much harder.