1,500 Palestinian prisoners are in their third week of a hunger strike for dignity: their demands include rights to visits and increase in family visits, access to telephone calls to family and friends and end of solitary confinement.  Visits are a particular issue since although the Israeli authorities permit visits every fortnight in theory, they require Palestinians in the occupied territories to obtain permits before permitting them entry to the Israeli state, which is where the prisoners are being held and these are often refused or delayed.  Protests and other actions in solidarity with the Palestinian hunger strikers have been and are taking place around the world.

Demonstration in Gaza, joining different groups — worth watching to the end, seeing how the event grows and new flags join 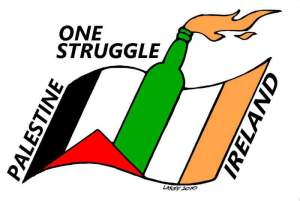 The Ireland Palestine Solidarity Campaign have organised a number of events (see their FB page for some photos and reports).  But in addition, various protests have been and are being organised by various other groups, campaigns and political organisations/ parties.  Also messages of Palestinian solidarity have been incorporated into many other events, for example commemorating the Easter Rising of 1916 and the subsequent Executions by the British Occupation, or celebrating International Workers’ Day.

For example, the non-aligned Socialist Republicans for Palestine organised an event on 28th April in Dublin’s main street (photos below) on 28th April. 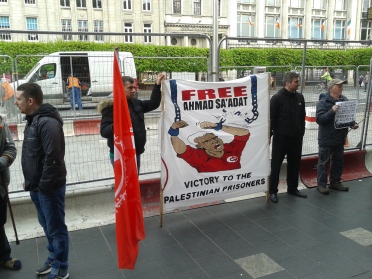 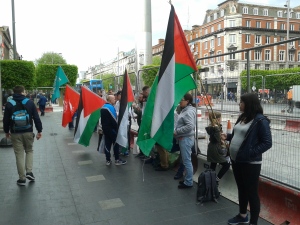 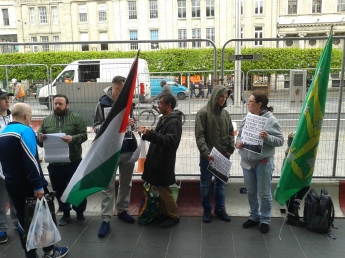 PALESTINE INSIDE THE JAILS

“On Thursday, repressive units continued to invade prisoners’ sections in Ramon prison following a raid on striking prisoners’ sections in Ashkelon prison on Tuesday, when striking prisoners were assaulted for refusing to stand up for inspection.  Palestinian lawyer Karim Ajwa reprted that five prisoners were wounded in the face and head and taken to the prison clinic. Ajwa also said that internal disciplinary hearings were conducted against the hunger strikers and sanctions imposed on them as well as fines of 500 NIS ($125) each; he said that salt was also taken from the prisoners in an attempt to break the strike. After 11 days of denials, Ajwa finally obtained a legal visit with Nasr Abu Hmeid and Said Musallam, who also reported that the striking prisoners are boycotting medical examinations and that there are serious health concerns for the ill prisoners participating in the hunger strike.” (from Samidoun, see link)

“Meanwhile, in Nablus, Palestinian former prisoners and long-term hunger strikers Khader Adnan and Mohammed Allan, as well as Palestinian Prisoners’ Committee coordinator Maher Harb, were attacked and then detained for several hours by Palestinian Authority security forces before being released, as they participated in a march to support the prisoners.  The prisoners of the Popular Front for the Liberation of Palestine, the Democratic Front for the Liberation of Palestine and Islamic Jihad issued a message from Israeli prisons in support of Khader Adnan, denouncing “desperate attempts by some parties to incite against the activist Khader Adnan as a prelude to physical tageting,” and saying that Adnan is a symbol of unity and resistance who is threatened by the occupation.” (Samidoun)

IN THE COMMUNITIES IN PALESTINE

In Gaza, the demonstrators in addition to supporting the prisoners on hunger strike called for “freedom for Georges Abdallah and Bagui Traore in French prisons. Georges Ibrahim Abdallah is the imprisoned Arab communist struggler for Palestine who has spent over 32 years in French prisons. …. Bagui Traoré is the brother of Adama Traoré, killed in French police custody on 19 July 2016. Bagui is the main witness of his brother’s death; since the killing of Adama, Bagui has been imprisoned, first sentenced to eight months in prison for allegedly hitting police and then accused of involvement in shooting towards police and gendarmes in the protests against the killing of Adama.”   (Samidoun)

Roundup of protests past and upcoming in Ireland: http://www.ipsc.ie/press-releases/palestinian-hunger-strike-updated-list-of-solidarity-actions-in-ireland

News from the jails and the communities outside: http://samidoun.net/2017/04/twelve-days-of-palestinian-prisoners-hunger-strike-protest-and-mobilization-continue/