On a wet and cold Saturday, up to two score protesters gathered on the pedestrian reservation in O’Connell Street to denounce the Special Criminal Courts and their operation.

They lined up opposite the iconic General Post Office, site of the HQ of the Easter Rising in 1916 and still bearing the marks of British Army bullet and shrapnel strikes. As traffic and shoppers hurried by or stopped to stare, the protesters were observed by members of the Garda Special Branch, the political section of the police force of the Irish state, one of whom ducked behind one of the GPO’s columns as someone pointed a camera in his direction (to cause some mirth among the picketers).

Among the picketers on the 20th January 2017 were members of different Irish Republican groups and campaigns as well as a number of independent activists of Republican, Socialist and Anarchist backgrounds.

After standing for a while displaying placards and banners, the protesters gathered around to hear Sean Doyle, who had been presented as the campaign’s spokesperson. 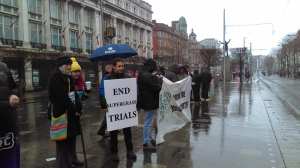 Remarking that the Special Courts are “a travesty in law”, Doyle added that one should “never equate law with justice.” Doyle accused the Courts of being “a political tool to deny due process”. He encouraged those present to ask themselves whether Maurice McCabe or John Wilso (both Gardaí who fell foul of the force) would nowadays trust uncontested evidence. Doyle went on to say, in reference to administrations both sides of the Border, that “Political special courts are structured to deny your civil and human rights and must be abolished.”

Special courts of the Israeli Zionist regime, or US military-occupied areas were also condemned by the speaker, who called for “cooperation and sharing of information across the world” because “injustice knows no borders.”

After Doyle’s short speech had been applauded, Ger Devereaux thanked everyone for attending and informed them that the campaign against the Special Courts would continue with pickets and meetings and asked people to spread the word to help the campaign to grow and to achieve success.

The operation of the law in what are called “democratic” societies is supposed to be that a person suspected of committing a crime is accused and brought to trial, where the evidence is presented against him and should he choose to do so, he or his representation defend him. A jury drawn at random then considers the evidence, decides the verdict and, should that be of “guilty”, the judge pronounces sentence, within the parameters of the maximum and minimum set by law. That’s the theory, anyway.

We all know that there are flaws in that system, even without considering the laws under which the operate and the real power and wealth in society, as well as the power of the media, prejudices among jury members, lying witnesses, faulty expert testimony, etc. Nevertheless, the system is an advance on what existed before and provides some protection to the accused. At times the jury arrives at a verdict which is manifestly contrary to that desired by the forces of the State, i.e on the side of democracy and justice and against repression. A quite recent example was the finding of “not guilty” for the Jobstown protesters last year after a politically-orchestrated attempt by State, politicans and media to find them “guilty”. Another example, further back, was the exoneration of the five anti-war activists in 2006 for their actions against US warplanes in “neutral” Shannon airport.

The State has decided upon a way to overcome this problem, which is to do away with juries completely and, with the Special Courts, it has achieved this: these courts have no juries and, furthermore, a majority verdict of two out of three judges is sufficient for conviction. This would be of concern enough were it not for the fact that the Government appoints all of those judges.

The first of these courts was set up in 1939 under De Valera, as part of the Offences Against the State Act but fell into general disuse after the 2nd World War, to be briefly brought back during the IRA’s Border Campaign of the 1950s, when hundreds were interned. The Special Court was resuscitated in 1972 (as was the Amendment to the Offences Against the State Act – more about this below), again by a Fianna Fáil government under Jack Lynch.

A second Special Court was created by Minister for Justice Frances Fitzgerald, in the FG-Labour coalition Government, ironically on the centenary year and month of the Easter Rising. The justification was quite baldly that it was difficult for the State to achieve verdicts of guilty in some cases through the use of a jury. Of course the State declares that the difficulty arises in that the members of a jury may be intimidated by criminals or “terrorists”. But might it not equally be that the accused are not guilty at all? Or that the State has not bothered with the niceties of the democratic system and carried out its investigation? And if the jury system is to be judged ineffective in one kind of case, why not in others?

Originally, the target of the Special Courts was clearly political activists. When the atmosphere allowing political persecution by the State dissipated somewhat, it was claimed that the target was gangsters. However, for long years the victims continued to be political activists – exclusively of the Irish Republican brand. With an occasional suspect of the gangster type occasionally brought before the Special Courts however a stream of Irish Republicans find themselves facing them.

Among the famous convictions of the Special Courts were the sentencing to death in 1976 of the Anarchist couple Noel and Marie Murray for alleged murder of a Garda, the sentences being quashed on appeal after a campaign and reduced to life instead.

In 1978, then IRSP members Osgur Breatnach, Brian McNally and Nicky Kelly were all sentenced to long terms in jail. Their sentences were overturned in 1980 (and 1984 for Kelly) and years later they received compensation, reportedly in six figures.

A few more big convictions of political activists followed which were not overturned on appeal until in 2001, Colm Murphy was convicted of conspiracy to cause the Omagh bombing but in 2005 his conviction was quashed after revelations that the judges had acted improperly and that Garda witnesses for the Prosecution had falsified their notes. He was finally cleared by the SCC in 2010.

In 2003, Michael McKevitt was convicted by the Special Court of allegedly “directing terrorism” and “membership of ….. the Real IRA” in a judgement which has been criticised by a number of people unconnected to him.

There were no ‘gangland’ cases before the SCC until 1977/’78 and the Guerin murder trials, when one man was convicted on the evidence of a gang member turned State’s witnesses, a case about which many questions remain today. A big gap followed in ‘gangland’ cases until the years 2013, 2014 and 2016, with one case in each of those years..

Throughout all these years a steady stream of convictions and jailing of Irish Republicans for the lesser charges of “membership of an illegal organisation” have been processed through the Special Courts.

The same year that the Special Criminal Courts were introduced, i.e 1972, was when the Amendment to the Offences Against the State Act was brought into law. This provision permits conviction with the only evidence being the word of a Garda officer of the rank of Chief Superintendent or higher. Although historically judges have been reluctant to convict on this alone the quality of what other evidence they require has been slipping lower in recent years. Irish Republicans are now being convicted, for example of membership of an illegal organisation, on the word of a senior Garda who says that he has reason to believe that they are such, supported by spurious “evidence”. In one case this “evidence” consisted of a piece of paper allegedly from a prisoner the man had been visiting which discussed some recent events and in another, that Gardaí had “seen him turn down a dark lane”.

The irony is that the resuscitation of the Special Courts and the introduction of the Amendment to the OAS Act were voted in after a terrorist bomb planted by British agents. The Jack Lynch Fianna Fáil Government seemed to be heading for a defeat in the Dáil on their proposal, with Fine Gael. Labour TDs and others set to vote against. During the debate, on 1st December 1972, two car bombs exploded in Dublin, one Eden Quay and another on Burgh Quay, killing two CIE workers and wounding 131. In the succeeding panic, the opposition to the measure collapsed and it was was passed. Wikipedia: “It is believed that the 26 November and 1 December bombings were executed to influence the outcome of the voting.”

Both sides of the Border, Irish Republicans are now being convicted and sent to jail by non-jury courts, by the Diplock Courts of the Six Counties colonial administration one side and by the Special Courts of the Irish State on the other. Ironically, in Britain itself there are no non-jury criminal courts.

Given the patently undemocratic nature of the courts and the clearly political use by the State, what has the reaction of the civil and human rights sector been? In earlier days, it has been criticised by the Irish Council for Civil Liberties, Amnesty International and the UN Commission on Human Rights. In recent years, these critics, especially the Irish ones, have tended towards silence on the matter. The non-Republican Irish organised Left has likewise remained silent, as it tends to do with all persecution of Irish Republicans.

However, history has shown us that once the State succeeds in repression against one sector, it moves on to another it finds threatening or an inconvenience. It is therefore in the interests of all democratic and Left sections of society to unite against these undemocratic and repressive courts and to campaign for their total abolition.