Forty-five years after the highest violent loss of life of any day in the Thirty-Years War in Ireland, survivors and relatives of victims of the Dublin and Monaghan bombing seem no nearer achieving justice. The identities of some of the Loyalist terrorists were known quite quickly after the bombing by Irish Army Intelligence and Garda Special Branch; British Intelligence penetration of some Irish State agencies had already been claimed by Irish Army intelligence and not long afterwards, Commissioner Ned Garvey was exposed as a British agent by a disgruntled British intelligence operative. Yet no arrests by the Royal Ulster Constabulary, no arrest warrants issued by the Irish Government and – incredibly – remains of bomb material were sent by Garvey’s superior to the British colony authorities for analysis. And consecutive British Governments refuse to hand over the relevant files or to disclose their contents.

A crowd had gathered at the Dublin and Monaghan Bombings Monument in Talbot Street for some time before the event was due to start on the 17th May.  Aidan Shields, whose mother Maureen was killed in in Talbot Street, acted as the master of ceremonies and, after saying a few words about the bombings and the campaign, outlined the course the proceedings would follow, apologising also to those who had to stand in the rain.

Irish Minister for Justice Charlie Flanagan spoke about the bombings and about the efforts he had made, on behalf of the Government, to have the British Government lift their embargo on the relevant files. He also used the opportunity to criticise by implication the armed Republican resistance in the British colony and to promote the Good Friday Agreement, seeking collaboration between different political parties in running the Six Counties, i.e the British colony. Although he said he shared the relatives’ frustration at the British Government still not disclosing the information about the bombing in their files, not once did he condemn them, nor criticise successive British governments, British Intelligence nor the administration of the colony and its police force.

The Mayor of Dublin Niall Ring and Cathaoirleach of Monaghan Council, David Maxwell, also spoke at the event.

It was left to Noel Hegarty, a survivor of the bombing, in a poem (see References) and Pat Savage in his Song for Derek (which I’ve been unable to find on line) to place the blame for the attack and the lack of progress where it belonged.

Julieann Campbell, author and Derry Bloody Sunday relative – her uncle John Duddy was the first fatal victim of the Paratroopers on that day in 1972 — gave the oration for the ceremony. She talked about the loss through sudden death, the effect on relatives and how it is exacerbated when official lies are told about the deaths with secrecy used to make it harder for the relatives and survivors to get at the truth. She referred to one British file on Bloody Sunday that is embargoed for decades yet and turned to Minister Flanagan, asking him publicly to press the British for the release of that file also, a request which was applauded by the crowd.

Rachel Hegarty read one of her sonnets from her collection, May Day 1974, which she composed based on witness testimonies about the deceased and Ciarán Warfield performed a song about the bombing and the lack of justice obtained. Fr. Tom Clowe led those who wished to respond in a Christian prayer (the Rev. Trevor Sargent had injured himself the day before and was unable to attend). Cormac Breatnach played low whistle while floral wreaths were laid and again at the conclusion of the event.

What might be considered the official Dublin City centre is the area surrounding O’Connel Street, just north of the river Liffey. The street runs north-south and is bisected at its middle by a thoroughfare running east-west. The eastern part is mostly Talbot Street, with a short continuation named North Earl Street. Crossing over O’Connell Street one now passes by the Spire, where once stood Nelson’s Column (until blown up by dissident Republicans in 1966) and continuing westward, one enters Henry Street. This street contains big stores such as Debenhams and Arnotts and is a higher-class shopping street than are the streets chosen to place two bombs, Talbot Street; could it have been decided that predominantly working and lower-middle class victims were less likely to create pressure on the Irish Government to find those responsible? The other bomb’s target street, Parnell, is also not one of high-end shopping.

There had been previous Loyalist bombings in Dublin, for example of the Wolfe Tone Monument in Stephens Green and the O’Connell Monument in Glasnevin Cemetery. None of those had caused deaths but a bombing in 1972 had killed a public transport worker and another, in 1973, had killed two and injured 185. No arrests were made in connection with either and in fact the Fianna Fáil government blamed Irish Republicans for the ’72 bombing, using the emotions engendered to push through more repressive legislation. That was an Amendment to the Offences Against the State Act, one which allowed the State to jail people on a charge of belonging to an illegal organisation, without any evidence other than the word of a Garda of Superintendent rank or higher and is regularly used to convict people today.

On the 17th May 1974 four bombs exploded in Dublin and Monaghan – killing 33 people including a woman who was nine months pregnant. 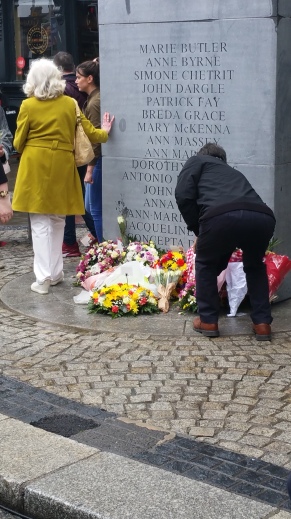 After the bombings, the most concrete result in Irish Government policy was that Irish Republicans being sought by the British began to be tried in the Irish State. The Criminal Law (Jurisdiction) Act 1976 allowed trial in the Republic for alleged crimes committed in the Six Counties, and vice versa, which facilitated Irish State cooperation with the British State against Republicans, overcoming the many failures in extradition cases up to that date.

This parallels somewhat the 1980s GAL terrorist campaign waged by the Spanish Government against Basque independentists in the northern Basque Country, part of the French State’s territory. After Spanish State-sponsored terrorist shootings and bombings of independentist Basques for some time on what it considers French soil, the French Government began to extradite refugees to the Spanish State. However it was 1984 before the Irish State actually extradited a Republican to the Six Counties, with the extradition of Dominic McGlinchey (who subsequently had his conviction overturned there). It is curious that this possible rationale for the Dublin/ Monaghan bombings does not seem to have been considered – after all, the 1972 bombings by British agents had resulted in a change in Irish law to the disadvantage of Republicans within the Irish State.

The Justice for the Forgotten campaign organises an annual commemoration on the date of the bombings but internationally and perhaps even in Ireland, this massacre is the least-known of all that took place during the recent 30 Years War. Arguably this is because a) the bombs were not placed by the IRA and the massacre was not therefore of much use in propaganda against them; b) the victims were mostly Irish and/or c) the perpetrators were Loyalists and British Intelligence operatives working together.

It is interesting how coyly the media treat the whole question of British collusion with Loyalist death squads, including the Glenanne Gang’s involvement in the Dublin-Monaghan bombings, along with Irish State‘s lack of energy in pursuing the matter, including possible collusion and certain secrecy. There are sometimes ‘suspicions’, ‘concerns’, ‘inferences’, ‘allegations’ ….

And yet most of these matters are beyond speculation, established as facts through a number of different sources. Contrast that with how happy the media are to label the tragic but accidental shooting dead of Lyra McKee as a “murder”, even though legally and in fact, murder can only be when someone intends to kill the victim – which not even the press in its greatest hysteria has tried to suggest was the case.

The Justice for the Forgotten campaign has taken a civil case against the British State which appears to be playing its usual delaying game in situations like this. On 17th April they were due to respond to questions of the campaign’s lawyers but did not do so until eight days later, which resulted in the campaign’s lawyers not being able to proceed at the Belfast High Court on May 1st ….. The relatives will now have to wait until September.

The lack of energy and firmness in pursuing the issues and the disclosure of British files is not the only evidence of the Irish State’s lack of interest. It is also the case that much of the funding for the Justice for the Forgotten campaign was removed by the Irish Government some years ago; the campaign was obliged to leave its Gardiner Street office and remove much of their equipment and files to a portakabin in a supporter’s back garden.

The British are not the only ones sitting on secret files. Mrs. O’Neill had called on Leo Varadkar to release the files deposited by the McEntee Commission, which was charged with investigating the Garda inquiry of the time, an inquiry which has been heavily criticised over the years. “I personally ask the Taoiseach to consider this reasonable and fair request,” she had said. Martha O’Neill’s husband, Eddie, was killed in the bombing and her sons Billy, then aged seven and Eddie jnr. aged five, were badly injured but survived.

Last year, Fred Holroyd, a British Army Intelligence officer who was the liaison with the RUC for a number of years during part of the three decades of war in the Six Counties, offered to give evidence on British involvement in the bombings – but in a secret court. Holroyd is suing the British Ministry of Defence over sacking him and has spoken out about collusion between the British administration and Loyalist paramilitaries including those widely believed to be the Loyalist bombers responsible for the carnage on the 17th May 1974.

Another measure of the Irish Government’s lack of enthusiasm for going after the perpetrators of the bombings and their handlers can be seen in the fact that the first documentary to be made about the atrocity in the Irish capital city and Monaghan town, was made not by the State broadcaster, RTÉ but by the English company First Tuesday, Yorkshire TV. “Hidden Hand – The Forgotten Massacre” was broadcast on 6 July 1993. Not everyone who had TV in the state then had ITV – I believe it required a special aerial at the time – and if memory serves me correctly, Yorkshire TV offered simultaneous screening to RTÉ, which it declined. The program made a case that the British Army, the RUC and Loyalist paramilitaries could have been involved in a number of killings, including the Dublin-Monaghan bombings.

The failure of the Irish Government at the time to pursue the case energetically and in a correct manner was responsible for much more than leaving the injured and the the relatives of 33 murdered people without justice. It also left the Glenanne Gang, a Loyalist paramilitary Ulster Volunteer Force death squad that included serving members of the Royal Ulster Constabulary police force and the British Army’s Ulster Defence Force, free to carry out around another 120 sectarian murders in the Six Counties.

Year after year, the Dublin/ Monaghan commemoration is held and year after year, relatives call for truth and justice; the Irish politicians express regrets and say that they will ask the British Government for the files again, to be refused again. And there it is left, until the following anniversary.

Justice for the Forgotten campaign: http://www.dublinmonaghanbombings.org/home/