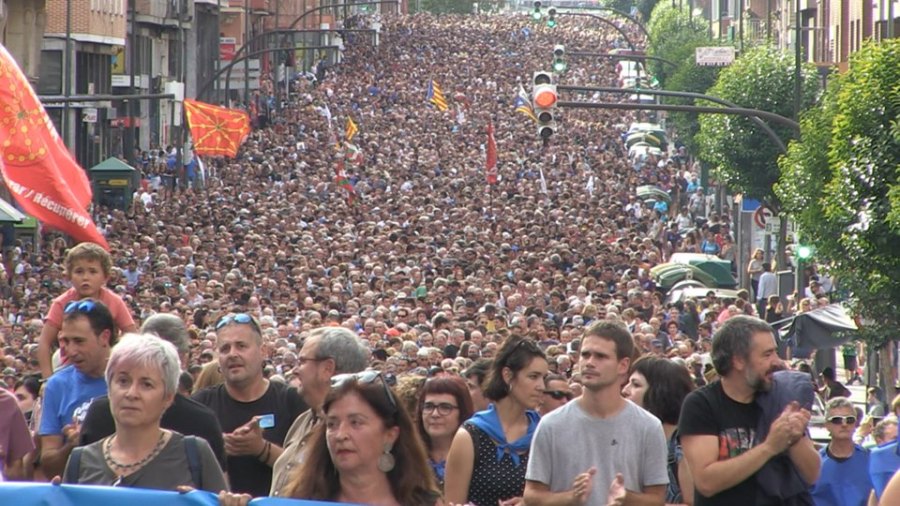 The idea of having to fight a war of repression simultaneously against two or more nations within the borders of its state must give the Spanish ruling class nightmares – it was only successful in doing so in the Spanish Anti-Fascist War with the assistance of Nazi Germany and Fascist Italy.

So Spain’s rulers, blood-thirsty though they are, must have been happy to let off lightly the Basque pro-independence activists with a maximum of less than four years prison sentence. Not of course that three years in Spanish jail is a holiday, especially for political prisoners, who tend to get dispersed throughout the Spanish territory, hundreds or even a thousand kilometres from their friends and families – but it is way below the norm for activists accused of “assisting terrorism” in the Spanish state.

The Basque pro-independence activists before the Spanish National Court on 16th September had been accused in November 2013 of “assisting a terrorist organisation” but what they had done in actuality was to try to organise effective solidarity and legal representation for the Basque political prisoners who are part of the ‘official’ list2. Some of those charged are lawyers. All 47 of them in court on 16th September pleaded guilty and the judges handed down the sentences. It was clear that a deal had been agreed with the Public Prosecutor and Judge before they stepped into the Court. But not only with them – the virulent AVT (“Relatives of Victims of Terrorism”), most of them relatives of Spanish military or police, who were a party to the prosecution of the Basques3, stayed silent but afterwards stated they were happy with the outcome.

Reporting on the judgement, GARA, bilingual daily newspaper of the line of the official pro-independence movement’s4 leadership, seemed to see the settlement, despite the jail time, as some kind of victory and proclaimed that the proceedings had taken “not even five minutes” (perhaps the reporter meant per person, as the total was elsewhere reported as taking around 35 minutes).

That is not how all Basque pro-independence activists see it, however. Discussing the case with one long-time activist she commented that “It was shameful. It was hard. I knew them, some of them especially. I had campaigned with them in the past and we had campaigned for them (after their arrest). To see them meekly plead guilty ….!” She might be expected to be critical as she is what some call a ‘dissident’, having parted company with the organisation with which she grew up and is now a member of Amnistia Ta Askatasuna (ATA — Amnesty and Freedom). That organisation that same day issued a statement in Basque and Spanish condemning the deal, stating that pleading guilty actually criminalised all the work done in solidarity with and to assist the prisoners on all fronts.

That the Basque ‘Autonomous’ Government moved within weeks to ban as criminal acts any public welcoming home of Basque political prisoners seems to bear out their analysis.  And the Spanish State has announced that no electoral publicity in the forthcoming elections may use the words “political prisoners” or “exiles”.

Another life-time activist with whom I spoke, this one still loyal to the leadership, agreed that the deal and the act of pleading ‘guilty’ was “shameful”. She is not likely to be the only one; many remain within the organisation but are critical of the leadership’s twists and turns for some years now. Those who are critical but remain inside the organisation and are still active do so because they don’t like the alternative – either the fact of leaving the ‘family’ or of going to the ‘dissident’ group. But apathy grows among others – they may remain notionally within the organisation but attend less events than they used to.

A veteran and leading theoretician of the movement, Iñaki Gil de San Vicentes, in an interview with on-line newspaper Noticias Canarias, commented that the 50,000 who had demonstrated in solidarity with the accused a few days before the court case had been tricked, as the deal had been done “behind their backs”. This was “not permissable”, according to the veteran activist, who was not reported in GARA and might not be published there again.

GARA and the leadership of the Basque pro-independence movement may see the court deal as a good one or even part of the “Basque peace process” for which they have long been waiting (and some even claiming it was already in existence). Whatever the criticisms of the “Irish peace process” (sic) people may have – and there have been many – once the weapons had been decommissioned and they signed up to the Good Friday Agreement, at least most of the Republican prisoners left the jails, albeit under licence. The Basque armed resistance group ETA called a truce in 2012, decommissioned its weapons and finally disbanded itself in 2014, for which it seems to have won not the slightest of concessions – not for the prisoners nor for Basque pro-independence society. In 2017 a brawl in the town of Altsasu (Nafarroa/ Navarra) in a late-night bar between some Basque youth and off-duty Spanish police resulted in jail sentences for the accused youth and, even though the judges had rejected the Public Prosecutor’s bid to have the youth tried under anti-terror legislation, they were condemned to terms of between two and 13 years (reduced this week on appeal to between 18 months and nine years).

NEUTRALISING ONE FRONT BEFORE MOVING ON TO ANOTHER

The Altsasu case generated outrage throughout the Basque Country but also came to the notice of the Catalan public when they were dealing with the effects of Spanish repression on their own independence movement during and after the October 2017 referendum there. Catalan people with a banner proclaiming their solidarity with the Altsasu youth marched in Basque demonstrations. And Basques have marched in Catalan pro-independence protests against Spanish State repression too. Though the numbers displaying solidarity in each case were comparatively small, the potential was there for a coming together of both movements and no doubt the Spanish ruling class, though not noted for its political sensitivity, became aware of the danger.

As commented earlier, the Spanish ruling class were no doubt wishing to avoid having to renew a war of repression against the Basques at the same time as their current war against the Catalan independence movement. Even worse things could happen to them while engaged in such a two-front war – such as elements in other nations, like Asturias and Galicia seizing the opportunity to mobilise. Or some outbreak of class resistance across the State’s territory.

In the recent Basque case, the Spanish State, while punishing the Basque activists, did so in a comparatively light manner and avoided that case being shouted in both Basque and Catalan nations as yet another example of Spanish State injustice and repression. But it required the cooperation of the accused activists – and no doubt the agreement of the official leadership of the Basque pro-independence movement, Arnaldo Otegi and company.

As I was writing these observations, the Spanish State arrested nine Catalan activists under “anti-terrorist” (sic) legislation and held them incommunicado in Madrid5. These activists allegedly from the CDRs (Comites de Defensa de la Republica, set up after the momentary declaration of the Catalan Republic by then President Puigdemont after the 2017 October referendum) are in addition to those 10 grass roots activists and elected politicians currently awaiting verdicts on charges of “rebellion, sedition” and “misuse of public funds”. In addition also to the various Catalan elected politicians in European exile and the 700 or so town mayors under investigation. The more recent Catalan arrested are not charged with anything they have done but with their alleged intentions.

Now that Basque problem has been tidied away ….

1 Leading activists of Askapena, which coordinated the activities of solidarity committees in a number of European countries (including Ireland) and Latin America, were accused as part of the sweep against Basque political prisoner solidarity campaigners. They did not plead guilty, fought their defence and were, eventually, found not guilty.

2 Which some have left, including six who did so publicly and are now part of a ‘dissident’ network.

3 The Spanish legal system permits civil society groups to take out a prosecution or to join the State prosecutions with their separate prosecutors, a provision almost exclusively availed of by right-wing groups such as the AVT. When the family of Inigo Cabacas took a case under this provision against the Basque police who had killed their son with a rubber bullet, the Basque Government’s Prosecutor had cooperated with the defence counsel of the accused.

4 The ‘official’ Basque pro-independence movement is comprised of the political party EH Bildu (formerly Batasuna, Herri Batasuna etc), the official political prisoners’ collective, the official organisation of relatives and friends of prisoners, the Gara newspaper, LAB trade union and smaller feminist and ecological organisations. It is also represented in some political coalitions and a number of broad fronts.

5  Two of the nine arrested were released the following day and seven remained incommunicado. This nightmare journey to Madrid for political detainees has been well documented by many Basque political prisoners, including threats of death, torture and even rape (the latter for female prisoners), stress positions causing difficulty in breathing within the vehicle, blows etc. Spanish “anti-terrorism” (sic) legislation permits as standard up to five days without access to the detainees’ lawyer, doctor or family and despite EU Committee Against Torture criticism, the practice continues. “Confessions” tend to be extracted after two or three days, which the prisoners withdraw as soon as they are in court and out of the hands of the police, alleging water torture, forced stress positions, threats to self and family, sleep deprivation, etc. As a matter of course, the judges ignore the allegations without ordering even a cursory investigation and proceed as though the “confessions” were voluntary and factual.