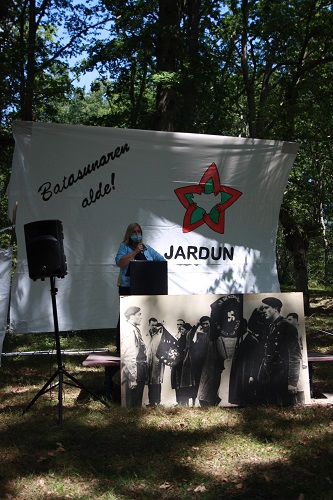 On Saturday August 15, two events were held on Mount Albertia in Legutiano.

“At 12 noon, at the top of Mount Albertia, the Eusko Lurra Foundation remembered the Gudari activists who fell in the war of ’36 fighting against fascism. This year the participation of women who fought for freedom and for the rights of workers in the war of ’36 was especially remembered, since women are have been greatly overlooked in this war.

“Later, in the surrounding of the Gaztelua oak grove, a political act was held. There, to begin the act, three veteran Ekintzales militants who maintained their militancy for decades were honoured. Later the organizations Eusko Ekintza and Jarki presented the new coordination called “JARDUN”, as an initiative for the union of forces of the pro-Independence Left.

“Today in Albertia, we bring to mind the gudaris (patriotic soldiers – Trans.) who, faced with fascism, fought for the freedom of Euskal Herria (Basque Country) in the war of ’36. Even so, we cannot, in any way, bring them to mind in a folklorist type of perspective. Passing beyond tears, we must approach today’s event from the point of view of the working people, whose only desire is to win and fight. That is why today, beyond only memory, we proclaim the legitimacy of the struggle of all those who in Albertia and in different parts of Euskal Herria have fallen fighting for this people. Precisely, the Albertia Day of 2020 has been organized along the line of that desire to continue fighting, in which its organizers want to make public a new tool that must respond to the aspirations of the Basque Working People. A tool that should function as a space for activation and organization.

“Due to fractures that have occurred for different reasons following the end of the previous cycle, the various organizations have not been able to overcome our differences and mistrust in order to agree on spaces for unity and coordination. Today, Eusko Ekintza and the revolutionary organization JARKI want to present a coordination space called JARDUN to the Basque Working People. JARDUN is not a split from anything, rather a framework that should shelter different national and local organizations, combining them in a political project and a strategy of a revolutionary independence and socialist nature. So that everyone can, from their space of struggle, organize individually or collectively.

“Today’s presentation, far from being what certain organizations are raving about, is in line with the capacity that the Basque Working People has historically shown when it comes to self-organisation in the face of the oppression it suffers. JARDUN is not a brand for the organizations that compose it to impose their ideology or their political project. It is a meeting point whose objective is to encompass and coordinate the Basque Working People, and all the organizations that work in favor of it, around broad but defined ideological principles. Its strategic objectives are clear: The construction of an Independent and Socialist state that integrates Araba, Bizkaia, Gipuzkoa, Lapurdi, Nafarroa Behera, Nafarroa Garaia and Zuberoa.”

(i.e the seven provinces of the Basque Country, including those on both sides of the Border between the Spanish and French states – Translator).

Albertia is the site of a battle in the Anti-Fascist war in Araba province from 30 November to 24 December 1936. The Basque Government’s forces launched an offensive on Villareal to take the town from coupist military-fascist forces and relieve the pressure on Madrid. Though the Basque forces significantly outnumbered their opponents, the latter were in defensive positions and had substantial air cover, while the Basque forces had hardly any. Eventually the siege was relieved by which time the Basques had lost 1,000.

Clearly a revolutionary movement needs to unite within itself different organisations and groups if it is to succeed. The official Abertzale Left had succeeded in this to a large degree, including under its umbrella a daily newspaper, a trade union, along with its welfare, political, cultural and social organisations. However, in taking the road of not only abandoning armed struggle but also focusing on the electoral path above all else, the official Abertzale leadership has taken some of its parts down that ruined road, causing confusion and fragmentation around it.

Is this Jardun a first step in the process of unification of the revolutionary alternative? Will it include the Amnistia and youth movements? Can it also include different elements such as anti-authoritarian self-organising groups? Will the internationalist arm of Basque national liberation, Askapena, be re-activated on a revolutionary basis? And can the mistakes of the past be overcome?

We shall have to hope, wait and see.