From their homes stolen lives.
Injustice never new.
Not one crime done nor crime seen.
A sentence served undue.

Witness blind and judge astray.
Trial a kangaroo.
You want a reason to believe?
My friend, I’ll give you two.

Two sons of Craigavon Ireland,
Our voices now are due.
The cry should shout until it cracks
For justice to the two.

It happens time and time again,
Shadows of me and you.
Where once stood four and then the six,
The mirror shows the two.

Together we can make this right.
As one we’ll see it through.
You want a reason to believe?
My friend, I’ll give you two. 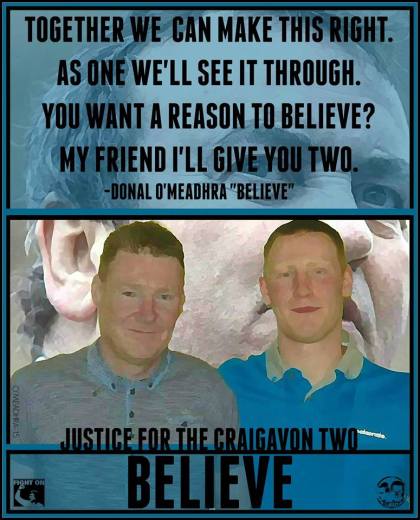 The poem is about the incarceration of the “Craigavon Two”, Brendan McConville and John Paul Wooton.  On the 30th of March 2012 both men were convicted and given life sentences.  They were accused of the fatal shooting of Constable Steven Carroll in Craigavon on the 9th of March 2010.  The evidence was a hotch-potch of questionable material including an “eyewitness” who only came forward a year later after both Republicans had been in jail for a considerable time, a man whose evidence was contested by that of his wife and of his own father.

The case against them was so riddled with inconsistencies and suspect material, alongside new evidence of police interference with witnesses for the Defence, that there were high hopes of both men being cleared and freed when the appeal concluded in October last year.  However, to the shock of many, including a number of Independent TDs (members of the Dáíl, the Irish parliament) and the late Gerry Conlon, their appeal was denied.

The campaign is on-going and supported by a number of organisations and individuals.  It was in support of the Two that Gerry Conlon, formerly of the Guildford Four (and a subject of the film In the Name of the Father), made his last public statement days before he died.

“Where once stood four and then the six” in the second-to-last stanza is a reference to the Guildford Four and to the Birmingham Six, ten people (all Irish save one) who in 1974 were wrongly convicted of bombings in Britain and were finally cleared only fifteen and sixteen years later.  Also wrongly convicted were the Maguire Seven (which included Giuseppe Conlon, Gerry’s father, and teenagers) and Judith Ward (a woman who was mentally ill at the time).

One thought on ““BELIEVE” — short poem by Donal O’Meadhra”