At 5pm on Friday 29th April (2016), Save Moore Street 2016 campaigners and supporters followed in the footsteps of the Easter Rising surrender. The event was in part a reenactment but aimed at an evocation rather than an exact copy of what happened around 5pm on the 29th of April, 1916.

On the 29th of April 1916, the Friday of Easter Week, the roof of the GPO, the HQ of the Rising, was in flames and evacuation was necessary. Earlier, all women who had no medical training were thanked for their service by the leaders and asked to leave. Later, all the remaining women were asked to take the wounded to Jervis Street Hospital, which they did, under fire. Three women refused to leave and remained — Julia Grenan, Elizabeth O’Farrell and Winifred Carney.

Just after The O’Rahilly led a group of Volunteers out to charge the British barricade at the Parnell St. end of Moore Street, the main body evacuated the GPO under fire and, going down Henry Place, headed westward. Machine-gun and rifle fire down Moore Lane killed at least one of the insurgents and injured a number. When they reached Moore Street and saw the machine gun at the top of that street too, they began to occupy houses on the east side of the street. In particular, they entered No.10 and made it their HQ for that evening, as well as their hospital. Throughout the rest of that night, they tunneled through the walls, from house to house.

When, on the following day, Pearse sent Elizabeth O’Farrell out to discuss surrender terms, General Lowe (who had earlier issued an instruction to the forces under his command that the ‘rebels’ were not to be taken prisoner), demanded unconditional surrender. The instructions were that they were to leave their weapons in the houses and to come out under a white flag, retrace their steps to the GPO, then on to Sackville Street and proceed up towards the Rotunda.

Sean McLoughlin gave different instructions and they marched out in military order, carrying a white flag but carrying their weapons also. As they neared the GPO, one of the Volunteers fixed a Tricolour to his rifle. As they passed the smoking shell of the building, McLoughiin called “Eyes Right!” in recognition that there, earlier in the week, the Republic had been formally proclaimed by Pearse with Connolly by his side. (The fixing of the Tricolour and the “eyes right” was reenacted as was the route taken). 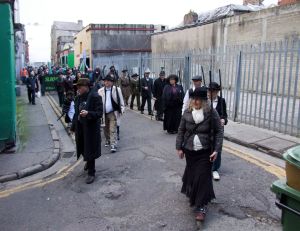 They proceeded up O’Connell Street and stopped outside the Gresham Hotel, where

on McLoughlin’s order, they dropped their weapons (today, this was done in front of the Savoy). One hundred years ago, the insurgents were surrounded by British Army soldiers with loaded guns and fixed bayonets. In the reenactment, as in the past, McLoughlin gave the order to the front rank to take four paces forward and the rear ranks to take two steps back. What that did in 1916, was to bring the front ranks right up against the British so that their bayonets were touching the insurgents’ chests, while the rear ranks brought their back up against the bayonets of the soldiers behind them.

In 1916, the prisoners were then marched off to the Rotunda Gardens to be kept there overnight without food or water. Six of the fourteen who were shot by British firing squads in Dublin had spent their last hours of freedom in Moore Street, including five of the seven signatories of the Proclamation of 1916.

The reenactment procession turned and proceeded down towards the GPO where Niamh Mc Donald of Save Moore Street 2016 Campaign introduced Donna Cooney, great grand-niece of Elizabeth O’Farrell, to read a poem about the Rising by Theo Dorgan. Damien Farrell then spoke on behalf of the campaignd