On a sunny but somewhat cool day on the 30th April, despite being on the cusp of the first day of Summer, a plaque was unveiled in North King Street. It was at last a memorial, a kind of formal recognition of a series of murders that took place in the locality 100 years ago. So many murders, in fact, that they have collectively become known as the “North King Street Massacre.”

‘In the closing days of the 1916 Rising the British army exacted brutal revenge on the civilian population of North King Street. Between 28th and 29th April sixteen civilian men and boys were brutally murdered by members of the South Staffordshire regiment of the British army.

The revenge on the civilian population of that small area of Dublin was for the spirited and well-planned defence of the area by Volunteers under Commandant Edward Daly, whose district HQ was the Four Courts. 60 Volunteers fought off repeated attacks by a force overall in their area of over 800 British soldiers — outnumbered 40 to 3 and, furthermore, without a single machine gun, of which the British had several (and better, faster firing rifles).  A video on the battle by Marcus Howard can be found here, with interviews with Darren Kelly and Derek Molyneux, authors of When the Clock Struck in 1916 https://www.youtube.com/watch?v=Kuy5u6BnjQo

An account and contemporary statements on the murders may be found here http://source.southdublinlibraries.ie/bitstream/10599/11507/5/Fragment1916.pdf from which the following has been extracted:

‘These 15 unoffending citizens were murdered by the military under circumstances which mark the crime as a cold-blooded and calculated atrocity hardly equalled in the blackest annals of warfare. None of the victims had any connection whatever with the insurrection, and indeed some of them may have been entirely opposed to it. One of the- murdered men, immediately before being shot, pointed to a pictorial representation of the Royal Standard which hung over his bed as a proof of non-complicity with the Insurgents, but no mercy was shown him.

‘The doomed men were torn from the bosom of their family, and despite all exposulation and explanation regarding their views, or identity, and despite the tears and entreaties of their terror-stricken relatives and women-folk, were led away to be slaughtered. In some instances requests were made that the military should at least make enquiries at the neighbouring police stations or obtain information from some of the prominent citizens to whom they were known. But all appeals were fruitless, they all shared a common fate at the hands of their cruel captors.

‘The young son of poor Hickey — a lad of scarcely 15 years — was at the last moment heard pleading pathetically for his father’s life. Both father and son were butchered together.

‘The wife of one of the murdered men carried a baby a few weeks old in her arms; the wife of another gave birth to a child but a few weeks after her husband’s murder. Both saw their husbands led away to death without even a moment’s respite to snatch a last farewell to those they loved. The houses in which they were taken were never at any time occupied by the Volunteers and no traces of arms or ammunition were found on the premises.

‘None of the murders was done during a sudden attack of assault, or in the heat of passion. In some cases several hours elapsed, allowing ample time for consultation with the officers in command before the doomed men were slaughtered. The officers seem in all cases to have overseen or directed the “ military operations.’ It would be difficult to find a parallel to these atrocious crimes.

‘At the inquest on Patrick Bealan and James Healy, Lieut.-Col. Taylor did not appear but sent a statement to’ the Coroner in the course of which he said :

“ No persons were attacked by the troops other than those who were assisting the rebels, and found with arms in their possession.”

General Maxwell afterwards made the sufficiently candid and luminous statement in the “ Daily Mail ” respecting the conduct of the troops under his command:

“. . . . Possibly some unfortunate incidents, which we should regret now, mav have occurred . . . . it is even possible that under the horrors of this attack some of them ‘ saw red ’, that is the inevitable consequences of a rebellion of this kind. It was allowed to come into being among these people and could not be suppressed by velvet glove methods, where troops were so desperately opposed and attacked. Some, at any rate, of the allegations are certainly false, and are probably made in order to establish a claim for compensation from the Government.”

‘Repeated attempts were made to have a public enquiry into the facts of these military murders, but were opposed by the British Government.’

Sixteen civilians had been murdered in cold blood in one of the principal cities of the British Empire by soldiers of that very Empire.  No official investigation ever took place, no soldier or officer was ever charged.

NO MEMORIAL FOR NINETY-NINE YEARS

It is perhaps understandable that no memorial was put up to mark the massacre while the British remained in occupation of the city – it would have been taken down by the authorities. But after the 26-County State was set up in 1921, it is less easy to understand. These victims were innocent civilians and not partisan to either side during the Civil War or the years of anti-Republican repression that followed. Not even the allegedly ‘Republican’ governments of Fianna Fáil provided a permanent marker to commemorate the massacre.

But for some years, Terry Crosbie, a local history enthusiast, has been campaigning to get a memorial erected to remember the massacre and its victims. Slowly, over the years, his campaign attracted support and finally came to fruition this year, the 100th anniversary of the Easter Rising and of the massacre too. Terry had in mind a boulder with a plaque on it but found that difficult to advance and, faced with a plaque being at last permitted and the wish to see the massacre being marked in its centenary, was pleased to see the erection of the plaque 100 years after those hours of terror for the area.

A PLAQUE AT LAST

The parade for the march to the site assembled at 2.00pm outside Kavanagh’s Pub on Aughrim Street in Stoneybatter and not long afterwards departed in a short parade, led by a piper, to North King Street where the plaque was unveiled.

Dr. Mary Muldowney of the Smithfield and Stoneybatter People’s History Project presided at the short ceremony. However, the amplification seemed poor and most people failed to hear what was being said. A number of “We can’t hear!” calls resulted in slightly better volume but still not enough for most to hear. A song that had been specifically written about the massacre was played but the same difficulty prevailed. 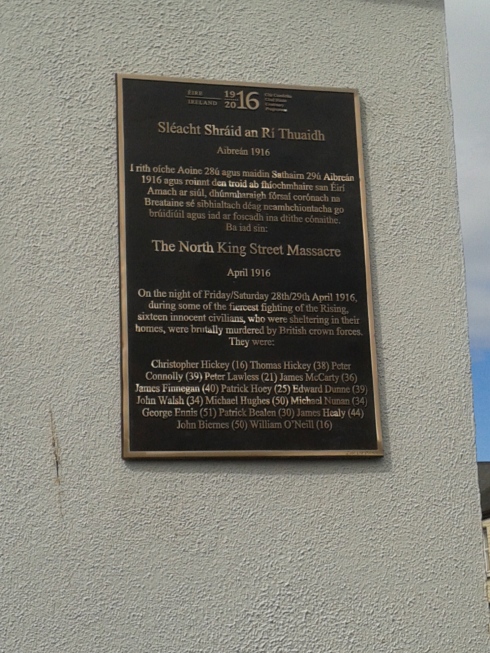 The plaque was unveiled to loud applause and wreaths and single lillies were placed before it by people related to the massacre victims.

The attendance was a healthy one in numbers as may be seen from the photos but also attracted a great cross-section of the political spectrum: older Stickies and Provos, some Left Labour, independent socialists and Republicans, housing activists, Save Moore Street activists, anti-Water Tax campaigners mixed with historians and local people who had no political organisational or campaign affiliation to speak of.

It was good to see a permanent memorial at last to the murder in cold blood of 16 civilians by an Army that has been responsible for countless atrocities around the world, including a number during the 30 Years War in the Six Counties; at least one of their units is accused in bronze here for what they did over a period of less than 24 hours one hundred years ago.