Beginning at the Garden of Remembrance, the procession, carrying large portraits of the executed martyrs of the 1916 Rising, wound its way down the main street past thousands of viewers, many of those taking photos and filming, down to the wall of Trinity College and the Bank of Ireland building, then back up Westmoreland street and up the west side of O’Connell Street to the GPO building, the site of the HQ of the Rising in 1916, for speeches as the ceremony of the commemoration.

The parade assembled at Dublin’s Garden of Remembrance and remained there for some time without the reason being clear, until the arrival of the participants dressed in green-brown military-style clothing, black berets and dark sunglasses, which many in the waiting crowd applauded. Presumably these were meant to represent the IRA but from the physical appearance of many it was clear that their active duty days, if they had them, were behind them. Presumably too, any organisation that did have an armed section would be reluctant to offer them up to the State for arrest on a parade and their all appearing at the last minute like that was also perhaps to reduce the opportunity for Garda harassment. 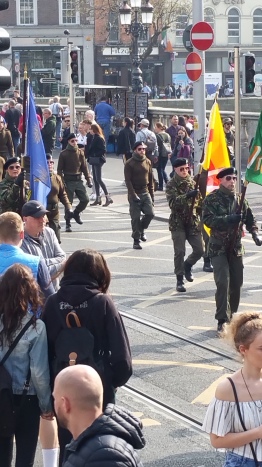 However, the uniformed Garda presence was in low numbers and although the Special Branch had officers there, they did not appear to be harassing Republicans for their names and addresses, as is their usual wont.

The route of the parade had been prepared placards bearing the words “The Unfinished Revolution” and “Saoradh” with tricolour flags attached at intervals to traffic sign and street light posts, including also at least one Palestinian flag. As the colour party and people in uniform lined up with banners and a band behind them and set off down towards the city centre, people joined in behind the band, with another band bringing up the rear.

The crowd appeared to contain many different elements, mostly men but quite a few women, some parents with small children and some teenagers, young men and older. Included among the attendance were a number of independent Republicans and socialists and a number expressed their decision to attend as having been influenced by the tragedy of the previous Thursday and the media campaign against ‘dissident’ Republicans, along with the apprehension that the Gardaí might take advantage of that to block or harass the paraders.

A scheduled Easter commemoration by a committee including apparently members of Saoradh to be held in Derry on Easter Monday had been cancelled as a result of a tragic incident. The armed British colonial police force in the Six Counties, the PSNI, had been carrying out house searches in the Galiagh and Creggan areas of Derry, allegedly for arms, to which youth had responded with stones and petrol bombs. During that incident, a gun was fired from the direction of the youth towards the colonial police but struck Lyra McKee, a young female reporter standing near them instead. Tragically the wound was fatal.

Saoradh had issued a statement after the event expressing regret for the death and extending condolences to Lyra McKee’s family and friends but also putting the incident in the context of regular harassing raids by the PSNI on houses in ‘nationalist’ areas and the always likely result of resistance (see Links for full statement).

Possibly in reference to that tragedy, a very tall long-haired man stepped in front of a section of marchers with his hands in the air. Stewards quickly blocked him peacefully and diverted participants around him.

Past the objector and into O’Connell Street, both the east side pavement and the pedestrian middle reservation were thronged with people watching, photographing and filming. The parade passed on to O’Connell Bridge, into D’Olier Street, turned right towards the Bank of Ireland building and back up Westmoreland Street to the General Post Office, location of the HQ of the Rising in 1916, outside of which the 1916 Proclamation had been read on 24th April by Patrick Pearse with James Connolly by his side.

THE SPEECHES AND CEREMONY

At the GPO, Saoradh party chairman Brian Kenna welcomed the participants. Republican Easter Rising commemorations tend to follow an established pattern, no matter which organisation is involved: the reading of the Proclamation; messages of solidarity from Republican prisoners; a speech by a representative of the organisation; the lowering of the flags to a drum roll and their raising again, in honour of the fallen; the singing of Amhrán na bhFiann, the Irish National Anthem. In the past, a statement from the IRA was also read but in recent years this have not been customary, for a number of reasons.

The usual components of the ceremony were present on Saturday outside the GPO with a few variations: a poem by a supporter read out, “James Connolly, the Irish Rebel” sung by another and “Róisín Dubh” played on the uileann pipes. The James Connolly song, with some powerful imagery and an attractive slow air, gives no indication whatsoever of the man’s revolutionary socialism and seems to incorporate him into the IRA, instead of the Irish Citizen Army which he co-founded or even of the Irish Volunteers, with which he joined forces only weeks before the Rising.

The RFB (Republican Flute Band) marching bands were from Scotland: The Wolfe Tone RFB Craigneuk and the Coatbridge Unitedmen RFB. One of the bands played “Take It Down From the Mast, Irish Traitors”, the lyrics of which deny the Tricolour to the Free Staters who waged the Civil War against the Republicans, the legitimate bearers of the flag. A participant remarked that the song was sung first against Free Staters, later against Fianna Fáil, later still against the “Stickies” and more recently against Sinn Féin.

In his speech on behalf of Saoradh, Dee Fennel from Belfast began by sending solidarity messages to Republican prisoners in Irish jails and to the relatives of all those who had fallen in the struggle against British imperialim. He said that the objectives set out in the 1916 Proclamation had not been achieved and referred to those participants in the struggle who had left it along the way, some to collude in upholding the two failed states of the divided nation.

Referring to his own activism, Fennel recollected how four years previously he had spoken at an Easter commemoration as an independent Republican, i.e not a member of any political party. He had spoken of the need for Republican activists to engage more with one another and also in the struggles of communities, women and trade unions. Fennel said that as a result of a discussion among Republicans, some had formed Saoradh, building on “maturity and commitment” while others “retreated to their flags” and went on to list the wide areas of struggle in which he said Saoradh activists could be found.

Fennel also referred to the activity of the IRA and said that while British imperialism remains in possession of a part of Ireland and prevents the exercise of sovereignty of the nation, there will be some form of armed resistance and that this is borne out by history.

Referring to the harassment and persecution to which Fennel said Saoradh activists were being subjected, including “tens of thousands of stop-and-searches, hundreds of house raids”, he linked that to the PSNI raids in the Creggan area of Derry earlier that week and the tragic accidental killing of Lyra McKee when “a Volunteer fired shots at PSNI forces”. Going on to say that the IRA do make mistakes from time to time, and referring to two women killed by the Provisional IRA in error years before, Fennel said that the IRA should admit and apologise for their mistakes (NB: The New IRA did later issue an apology and express condolences), though he also said that no words could compensate for the feeling of loss.

In reference to Brexit, Fennel said that the discussion is being focused on what kind of Border is to be imposed, while Republicans object to any kind of Border whatsoever. He stated that as socialists they also object to “the increasingly neo-liberal EU” and concluded with a call for solidarity with Irish Republican prisoners “in Maghaberry, Portlaoise and Mountjoy” who “are in captivity for no other reason thantheir commitment to Republicanism and a 32-county, secular socialist Republic.”

TRADITION OF THE PAST AND CLAIM ON TOMORROW

Republican organisations tend to commemorate the Easter Rising not only as a historic event but also to highlight that for which the Rising was fought has yet to be achieved. But they also do so to show that they are here, present, working for those objectives and often, to promote their organisation, to attract support.

The display involved in this Easter commemoration was impressive (despite a media claim that the numbers were only “around two hundred”), particularly in view of the inevitable bad press following the death in Derry and the system politicians’ statements on what a social media poster dubbed “The Opportunist Condemnatory Bandwagon”. It also seemed to show an organisation not much harmed overall in Ireland by a recent split over an alleged lack of internal democracy.

Saoradh statement on the killing of Lyra McKee: http://saoradh.ie/the-death-of-lyra-mckee-in-derry-saoradh-statement/?fbclid=IwAR2nH20ILtiGjgCyih2eo0HEpkK27_F89MRptEb_OIMfA0SbRz4YB8Fneiw

Media and politician reaction to “dissident” Easter Rising commemorations in Dublin (many other similar examples): https://www.independent.ie/irish-news/politics/video-an-insult-to-irish-people-republican-groups-march-48-hours-after-lyra-mckee-murder-dishonored-the-irish-flag-varadkar-38035393.html