AN GORTA MÓR COMMEMORATED IN SLIGO, DUBLIN AND CELTIC PARK 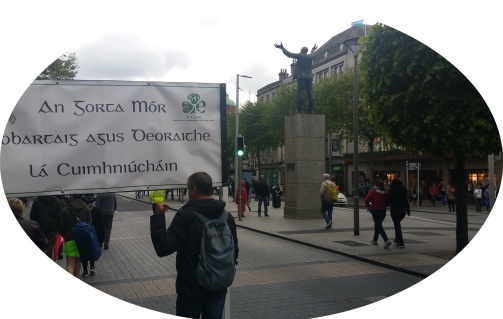 A small crowd gathered at the Garden of Remembrance, Dublin on Sunday afternoon to commemorate the Great Hunger, an Gorta Mór on National Famine Day.  Led by a lone piper, they marched through O’Connell St., the city’s main street, some of them in period costume, to the Great Hunger Memorial on the Custom House Quay, North Dock and later on to the iconic sailing ship, the Jeannie Johnson.

With some adults and children dressed in period clothes, some of them tattered to represent the destitution of the starving poor, they marched down O’Connell Street led by the lone piper and turned left at the Bridge, proceeding along to Custom Quay’s North Dock and the Great Hunger memorial. There they were addressed by Michael Blanch of the organising committee and by Niall Ring, Lord Mayor (coming to the end of his year in that role), who had accompanied them from the Garden of Remembrance.

Some sentences in Irish were spoken by the MC of the event and by the Lord Mayor, while Michael Blanch referenced the deadly impact the Great Hunger had on the Irish language (i.e with the depopulation of the main Irish-speaking areas of the western seaboard). The Irish Tricolour came in for a mention in the Dublin commemoration also; it had been presented to William Smith O’Brien by women in Paris during the revolution there of 1848 and the Young Irelanders had staged their own uprising that year also, small and certainly too late, easily crushed by the British colonial forces. The huge Irish diaspora was also mostly a result of the Great Hunger and had contributed significantly to the formation and membership of the Irish Republican Brotherhood, also known as the Fenians, founded simultaneously in 1858 on St. Patrick’s Day in Dublin and in New York. The IRB, in turn, had been the main driving force behind the 1916 Rising.

Tourists and other passers-by stopped to watch as wreaths were laid on on the statues of the monument and an Irish-language version of Amazing Grace was sung by a young girl in period costume. A currach (small traditional Irish sea-craft), containing a woman and two young girls in period costume and rowed by a man, pulled into place on the Liffey across from the group; one of the girls placed a wreath in a cardboard box into the river, to commemorate the Irish diaspora and those who had perished during their journeys. Participants then threw single red roses bouquets into the river also and floral wreaths were deposited around the statues of the 1977 memorial by sculptor Rowan Gillespie. And the piper played a lament, Hector the Hero.

The gathering moved on then to the sailing ship the Jeannie Johnson, to hear Evelyn Campbell sing her Famine Song and Diarmuid Breatnach sing Skibereen and Fields of Athenry. After that, some repaired to the Teachers’ Club, where tea, sandwiches, gur cake and biscuits were on offer. By coincidence, a Musical Society were relaxing there too and it was not long before songs from different parts of the world were being exchanged from different parts of the room. 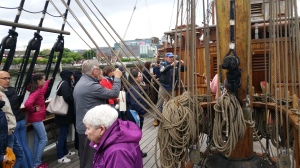 THE CAMPAIGN FOR A NATIONAL IRISH FAMINE DAY 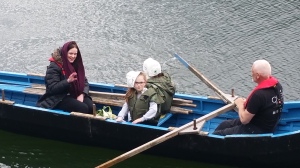 The Great Hunger is the preferred term in English by many for the terrible disaster that struck Ireland in the mid-19th Century, for people starved alongside what was for a while at least, an abundance of food.

For three successive years, a fungus-like oomycete infested the potato crop, staple diet of most of the population. Although Phytophthora infestans had attacked the potato crops on the European mainland and in Britain also, nowhere was the disaster of the dimensions it grew to in Ireland: nowhere else were the the majority of the population obliged to sustain themselves on the potato while yielding up every other edible product (except perhaps milk) to pay the landlord’s rent on land conquered from the ancestors of the starving, thousands of soldiers and police being on hand to ensure the hungry paid up. “The Almighty indeed sent the potato blight”, wrote Young Irelander journalist John Mitchell, “but the English created the Famine.”

Well over one million Irish starved or died of attendant diseases in less than five years during the reign of Queen Victoria, while ships left Irish ports laden with food and grain was fermented to make lucrative whiskey and beer. Another million emigrated and it is estimated that about one third of those also died – of drowning, of disease aboard ship or of the various dangers migrants faced. Five years after the potato crop failed, estimates put the population of Ireland at around six million, from the over 8 million of before. Over the next decade, another million would leave, paid to go, lied to go, forced to go, or gone out of desperation and loss of faith in any future in the country of their birth under foreign domination.

In 2008 it was agreed by the Irish Government that there would be a national Famine Day in the Irish calendar of national events and it would take place on the third Sunday in May. The State commemoration this year was held in Sligo, attended by Leo Varadkar (who was met by a protest of the Sligo Women’s Cervical Smear Action Group). The ceremony was covered in the RTÉ news which was shown on TV in the Teacher’s Club. Michael Blanch told those present that the campaign he and his wife had started in 2004 through the Committee for the Commemoration of Irish Famine Victims, had resulted in this national event and that it was also being commemorated by the Glasgow Celtic team in the special jerseys they wore that day (in their Scottish Premiership win 2-1 against Hearts). The symbol is black and white which are the colours of the Commemoration and he had also wanted GAA teams playing on this day to wear it on their jerseys (the Munster Hurling Championship match between Limerick and Cork was also being shown that afternoon on the TV screen in the Teachers’ Club).

REFERENCES AND LINKS FOR FURTHER INFORMATION

Celtic FC wearing Famine Commemoration logo on their jerseys on 19th May 2019: http://www.celticfc.net/news/16184

Presentation by Michael Blanch at the Oireachtas in support of a National Annual Famine Commemoration Day: https://data.oireachtas.ie/ie/oireachtas/committee/dail/32/joint_committee_on_culture_heritage_and_the_gaeltacht/submissions/2018/2018-11-28_opening-statement-michael-blanch-chairman-committee-for-commemoration-of-irish-famine-victims_en.pdf