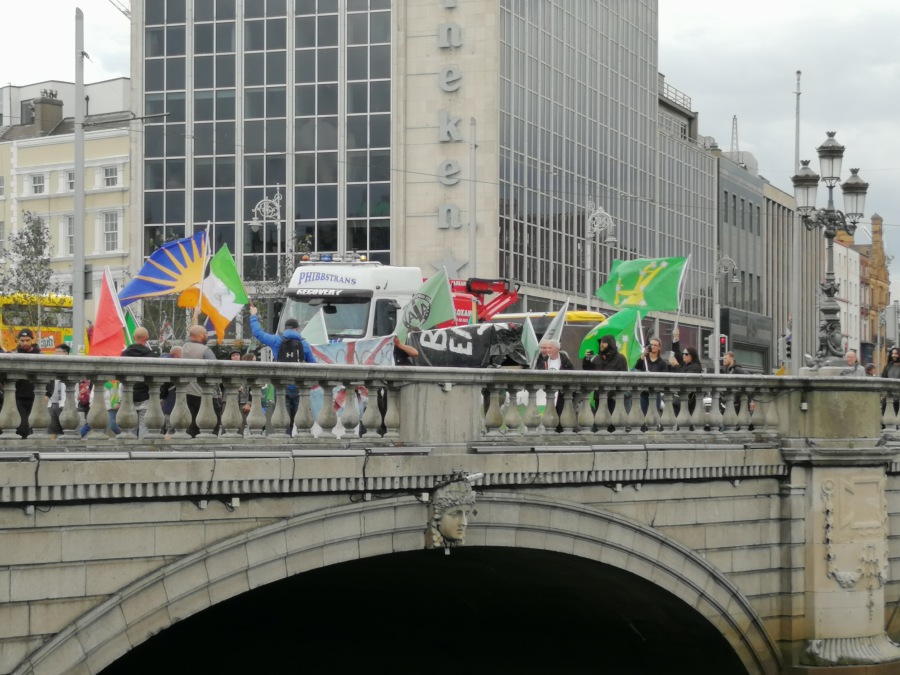 On Monday, as the remains of Queen Elizabeth II were being conducted in State funeral in London, Socialist Republicans rallied against monarchy in front of the James Connolly1 monument in Dublin.

They displayed flags and placards, heard speeches and burned the flag of the UK.

They then marched to O’Connell Bridge carrying a “coffin” bearing the words “British Empire RIP”, dumped it into the Liffey and marched on to the General Post Office building, where a large force of Irish state police prevented their entry.

The actions occurred as the royal funeral was taking place in London. In a move that drew public criticism from presenter of independent program Newstalk, national broadcaster RTÉ sent a crew to cover the funeral in London to film it in realtime for Irish national television.

Many Irish politicians (including leaders of the Sinn Féin political party) and public figures had sent fulsome messages of condolence and praise of the late British Queen.

“DOWN WITH THE MONARCHY!”

The chairperson of the event and speakers lambasted the “sycophancy” of Irish Government figures and other politicians and public figures. They drew attention of the past record of British Royalty and to the ongoing British occupation of Ireland.

The event had been publicised on social media under the slogan of “Down with the Monarchy!” and that was very much the tone of the event as occupants in a police van watched from across the street.

The chairperson opened proceedings by reminding the attendance of Connolly’s slogan at the outbreak of WWI that “We serve neither King nor Kaiser but Ireland.” Passing vehicles occasionally tooted their horns in approval.

A young socialist Republican read out Connolly’s article in The Workers’ Republic of March 1902 on the occasion of the coronation of Edward VIII.

Connolly stated that to Socialists the replacement of one exploiter by another hardly mattered and would excite little comment.

“But although we would rather treat the matter thus philosophically, we find that the machinations of those in power do not leave us that possibility; with them, and because of them, the festivities attending the Coronation have taken on the aspect not merely of a huge parade of pomp and magnificence – cloaking the festering sores of that slave society on which it is built – but have also become an elaborately contrived and astutely worked piece of Royalist and Capitalist propaganda, designed to captivate the imagination of the unthinking multitude, and thus lead them to look askance upon every movement which would set up as an ideal to work for something less gorgeously spectacular, even if more solidly real.

The evil effects of private ownership of industries is thus illustrated once more in a manner that ought to appeal to those patriots in our midst who still dread the innovating effects of Socialism on the National spirit of the Irish people2.”

Diarmuid Breatnach quoted John Ball, a leader of the English Peasant’s Revolt of 1381 who, addressing the crowd in reference to the Christian Bible story of Adam and Eve, enquired: “When Adam delved (dug) and Eve span, who then was the gentleman?”

For that challenge to divine right to rule or right by birth, Breatnach related, King Richard II had John Ball hanged, drawn and quartered, his head stuck on a pike on London Bridge and a quarter of his body displayed at each of four different towns in England.

Breatnach contrasted this to the right of workers, who he said produce all things, to the ownership of all things and called on working people to take their place in history as conscious beings.

Another speaker, on behalf of Spirit of Irish Freedom Republican Society and the Michael Fagan Fenian Society based in Westmeath also spoke and included the Sinn Féin leadership in his denunciation of Irish politicians who had accepted and praised British Royalty.

Seán Doyle spoke about the attitude of servility which works its way into many different aspects of life, for example into accepting the laws of the capitalist system and the housing crisis.

Doyle likened the acceptance of this right of capitalism to acceptance of the divine right to rule and stated that workers had to break from this acceptance, which is what the Revolutionary Housing League was advocating and practicing in action.

UNION JACK IN FLAMES AND COFFIN INTO THE RIVER

After the speeches a copy of the “Union Jack” flag was set on fire to symbolise the future of the forced union of nations — including a part of Ireland — under England rule.

Participants formed up into two columns flying flags, headed by four persons carrying a large pseudo-coffin. Taking to the road, they crossed Butt Bridge, turned right along the quay until they reached O’Connell Bridge.

There Gardaí and three Public Order Vehicles awaited them. Undeterred, the marchers cheered a short speech and chanted some slogans. Then at the count of “a h-aon, a dó, a trí” the “coffin” was heaved over the parapet into the Liffey river.

This action emulated a similar one carried out by James Connolly and revolutionary socialists in 1897 during Queen Victoria’s visit to Dublin.

It is worth recording too that Queen Victoria visited again in 1900 to affirm Ireland as part of the UK and to help recruit more Irish to go and fight the Boers in South Africa.

In response to that occasion, Iníní na hÉireann (Daughters of Ireland) led over 50 women in organising a Children’s Patriotic Party on the Sunday after the Wolf Tone Commemoration in July of that year.

Over 30,000 children had paraded from Beresford Place to Clonturk Park in north Dublin where they were served picnic lunches and listened to anti-recruitment speeches.

After disposing of the “coffin” of the “British Empire” on Monday, the marchers proceeded to the General Post Office where the building had been closed and a strong force of Gardaí also prevented access.

The GPO was the HQ of the insurrectionary forces during the 1916 Rising and many considered it insulting to their memory that the Irish tricolour above the building was lowered to half-mast in respect for the British monarchy.

The event concluded with cheers from passers-by and without any arrests.

1The James Connolly monument in Dublin is located in Beresford Place, across the street from what was the old Liberty Hall, the HQ of the Irish Transport and General Workers’ union (now replaced by SIPTU).

2See Sources & Further Information for a link to the full text.