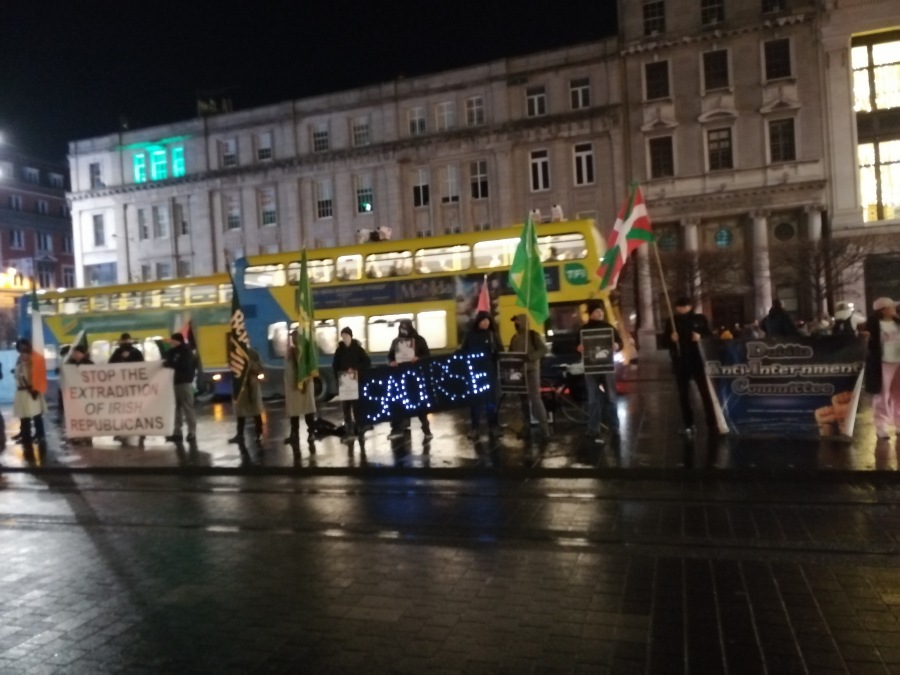 The event was a jointly-organised public reminder of the continuing existence of political prisoners in Ireland and as a gesture of solidarity to the prisoners too.

The joint organisers were the Ireland Anti-Internment Campaign, the Irish Republican Prisoners Welfare Association and the Anti-Imperialism Action organisation. The attendance were mostly Irish Republicans but there were also some from the socialist/ anarchist traditions present.

There are currently 40 Irish Republican prisoners in jails in Ireland, on both sides of the British Border. As a speaker noted at the end, all had been sentenced or refused bail by no-jury special courts of the Irish and British states.

The Irish Tricolour and the Starry Plough were displayed of course but also a Palestinian flag and two Basque ones; the latter attracted the attention of a number of young people from the Spanish state who were pleased and approached the picketers for discussion.

Two banners called for and end to the extradition of Irish Republicans and one figured cartoonist Carlos Latuff’s illustration of solidarity between Irish and Palestinian political prisoners.

Leaflets of the IRPWA and of the IAIC were distributed to passers-by.

As the event came to an end a representative of each organising group read out a short statement; both the IAIC and the AIA emphasised the need for unity in resisting repression and each along with the IRPWA called for support for Irish Republican prisoners.