The march called to save “the Revolutionary Quarter” of Moore Street followed the footsteps of the GPO garrison on Easter Monday but, upon reaching the GPO, continued on along the that week’s Saturday surrender route up to the Rotunda.  Wheeling left then, the march proceeded on to the junction with Moore Street, where the British Army had their barricade and machine gun on Friday Easter Week — the cause, along with the sniper in the Rotunda tower, of many deaths and injuries in Moore Street.  The march wheeled left again into Moore Street and proceeded to the rally outside the GPO, where speakers were to address them and artists to perform.

from Save Moore Street 2016 campaign

The Save Moore Street 2016 campaigners and supporters gathered well over an hour before the advertised time outside Liberty Hall where their wardrobe department was busy outfitting people while a steward organised people for photo shoots, leafleting and kept the crowd informed.

By the time the march set off from Liberty Hall it had gathered many, quite a few in period costume and some others joined it along the way. Many had come already dressed in period costume or were decked out by the wardrobe department of the Save Moore Street 2016 campaign and a solid group of them marched behind the new campaign banner.

Others marched behind the original Save Moore Street (from demolition) 2016 banner while others carried banners of some organisations supporting the march: the Cabra 1916 Society, O’Hanrahan Car1ow 1916 Society, Dublin Says No, Munster Anti-Internment Committee, Republican Sinn Féin, Dublin IRSP …..

Led by two people with megaphones and, at times, spontaneously, they shouted: “Save Moore Street from demolition!”

With reference to the Chartered Land and now Hammerson’s huge shopping centre plan for the area, the marchers shouted:

Other slogans included: “Our history! Our heritage! Our street! Our Rising!” 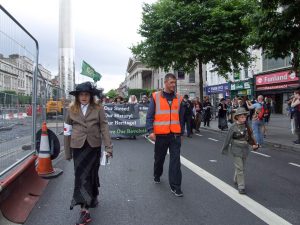 Up Lower Abbey Street the marchers went, in the footsteps of the GPO Garrison on that Easter Monday morning, past Wynne’s Hotel where Cumann na mBan had been formed in 1913, past the former Hibernia Bank on the corner of Abbey and O’Connell Street, where Volunteers fought and where Irish Volunteer Captain Thomas Weafer, from Enniscorthy was killed and his body consumed by the flames caused along the street by British shelling.

Turning into O’Connell Street, the marchers passed the location of Bloody Sunday 1913 when, after Jim Larkin defied a court ban to speak, the Dublin Metropolitan Police ran riot beating Lockout strikers and onlookers down to the ground with their truncheons.

Among the artistic and dramatic sector whose participation was noted were artist and activist Robert Ballagh, drama director Frank Allen (who also organised the first Arms Around Moore Street event in 2009 — and has the T-shirt to prove it!), Brendan O’Neill — also an actor and long-time campaigner — and actor Ger O’Leary.

Relatives of prominent fighters in 1916 also participated and Jim Connolly Heron, great-grandson of James Connolly and among the earliest campaigners for Moore Street and Donna Cooney, great-grandniece of Elizabeth O’Farrell, who went out into the killing zone to organise the surrender, were both noted marching. Patrick Cooney, also of the specific 1916 relatives’ group that brought the legal challenge to the High Court marched along too and spoke from the platform at the rally. Gabriel Brady, grand-nephew of the printer of the 1916 Proclamation, Christopher Brady, was there too, as was Eoin Mac Lochlainn, a relative of the Pearse brothers and a relative of Seán Mac Diarmada was also present and in fact helped carry one of the SMS2016 banners.

A number of historians walked among the marchers, including Ruan O’Donnell, Dónal Fallon, Ray Bateson, Hugo McGuinness, along with local history activists such as Joe Mooney (of East Wall History Group) and Terry Fagan (of North Dublin Inner City Folklore Project). Ciarán Murphy, joint blogger and joint author with Dónal Fallon of the Come Here To Me publication marched along too. From the non-history world of academia, Paul Horan, lecturer of Trinity College (and who wrote the letter published in the Irish Independent on July 2nd denouncing the Minister of Heritage appealing the Barrett High Court judgement that the whole Moore Street quarter is a national monument) marched in period costume too.

Passing the General Post Office, the marchers continued along the route of the GPO/ Moore Street Garrison as they surrendered on the Saturday of Easter Week, up to the Gresham, where they laid down their weapons and on to the Rotunda, in the garden of which many had been kept for two days without food or water, while detectives of G Division from Dublin Castle came down to identify prisoners for execution. On the way the marchers passed the Parnell Monument, where British officers had displayed the battle-damaged “Irish Republic” flag upside down as a trophy for a photographer.

On this Saturday in 2016, volunteers (some in costume) accompanied the marchers along the route, handing out leaflets, which were eagerly taken by onlookers, while others – all in costume — collected donations along the way, distributing stickers in exchange. Well in excess of five hundred leaflets were distributed in the period of the short march.

Turning into and a little along Moore Street, the marchers were called to stop for a minute’s silence out of respect for the Irish Volunteers, Citizen Army and civilians who had been shot down in that street by British Army guns, for the six who had been shot by firing squad after they surrendered and for those who had risked their lives in an uprising against the biggest empire the world has ever seen.

All sound in the street died: marchers, street traders, bystanders, shoppers — all stood silent in a street which would otherwise be filled with the noise of a street market and busy shopping thoroughfare on a Saturday afternoon.

At the conclusion of the minute’s silence, the march recommenced, calling its demands with renewed vigour, out into Henry Street, right to O’Connell Street to form up for the rally by the stage in front of the GPO.

The rapper Temper-Mental MissElayneous (Elaine Harrington) from Finglas was the first on the stage and performed her “Fakes and Manners” and “Buachaillí Dána” raps but continuous problems with the sound amplification at this stage of the rally meant much of what she was saying could not reach the audience (fortunately this was amended later).

Niamh McDonald, chairing the rally, welcomed the crowd and said that the campaign to save the Moore Street quarter was at a crossroads; developments had brought Irish property developers and the State into opposition to the appropriate conservation of the quarter but also now foreign vulture capitalists. “Save Moore Street 2016 will do what it takes to defend this historic quarter” she said, reiterating three basic demands of the campaign:

It was time for the campaign now to take the fight to the speculators and the next in a series of monthly events would be a demonstration against Hammerson themselves, McDonald told the rally.

The first speaker was then announced, historian and author Ruan O’Donnell, who reminded the rally that the Government of the time had been prepared to demolish Kilmainham Jail. The site had languished until volunteers took up the work of restoring it as a museum and now it is so successful that one has to queue to gain access to it.

O’Donnell castigated the attitude and thinking of successive Irish governments and pointed out that the GPO and Moore Street are sites of crucial importance in the struggle of the Irish people for nationhood.

O’Donnell’s speech, as did McDonald’s, received cheering and applause a number of times during their course as well as at the end.

Dónal Fallon, also author and historian, then stepped up to address the rally and also denounced the Gombeen state that had followed the struggle for independence, in which property speculators grew fat while the people suffer in a housing crisis.

Patrick Cooney (of the relatives’ group that took the High Court challenge against the Minister of Heritage) was then introduced and spoke of the recent Appeal Court appearance where the Minister’s team had been castigated by a Judge who insisted they had to specify against which part of Judge Barrett’s judgement they were appealing – her Department could not take a blanket position and say that they were against it all (SMS2016 comment: indeed, part of the judgement was that the banner erected on Nos.14-17 had been erected illegally, and the Minister has already stated that work would commence to remove it and to fill in the holes the builders put into the face of those buildings in order to fix the banner there). Cooney welcomed the announcement that the appeal would not be heard until December 2017, saying that this would give time for more pressure and perhaps a change of government.

Cooney also spoke of the long struggle to have the importance of the site acknowledged and to save it from property speculators and in passing also paid tribute to those who had occupied the building in January of this year.

Last to speak was Seán Doyle, speaking on behalf of the Save Moore Street 2016 campaign. Seán questioned whether we were worthy of the inheritance which had been bestowed upon us.

Referring to speculators and their facilitators, Doyle concluded by saying that “men in suits can be more dangerous than men in armour”.

All those speeches were enthusiastically applauded.

By this time the technical problems of the sound amplification had been overcome with the assistance of a member of the audience and Paul O’Toole stepped up to the microphone. He recalled that the best stage he had ever performed upon had been a couple of pallets drawn up in front of No.16 Moore Street in order to play at a rallying event there.

He then sang and played “The Foggy Dew” and “The Cry of the Morning”, followed by his own composition “We Will Not Lie Down”. The event could not end without Temper-Mental MissElayneous being given an opportunity to perform with the sound amplification in full working order and she launched into her “Fakes and Manners” rap.

The crowd having applauded the performers, everyone was thanked for contributing to the event, banners were rolled up and costumes packed back into cases.  Some people stood around chatting while the lorry that had provided the stage pulled out into the traffic, one of the organisers gave a radio interview to Newstalk and MissElayneous, on a roll now, performed for a small audience and video camera with the GPO as a background.

Across the road, outside the GPO, to which it relocated after some of its activists went to participate in the march, having earlier completed its 94th Saturday on Moore Street through which it has collected more than 50,000 signatures in support of Moore Street, the Save Moore Street From Demolition campaign table was also wrapping up.

And, despite threatening sky and pessimistic forecasts – it hadn’t rained once.