The annual January march in solidarity with political prisoners, taking place in continuous rain on Saturday 13th January, packed the streets of the Basque city of Bilbao (Bilbo) with estimates of numbers in attendance varying from 95,000 (GARA) to 100,000 (DEIA). 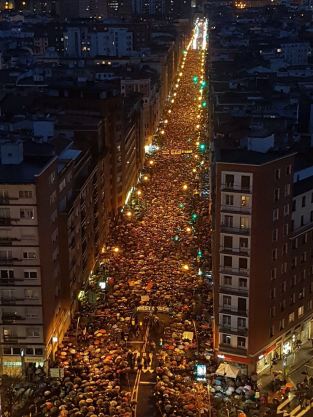 Numbers on this march are always high (especially taking the total population of the Basque Country of less than three million into account) but may have been boosted somewhat this year by a) the ongoing resistance to Spanish state repression in Catalunya and b) news that the French state is at last moving away from its policy of dispersing its political prisoners far from their home country.

Saturday’s march was organised by Sare, a broad front set up a few years ago and was supported by EH Bildu (political party of the Abertzale Left) along with the Basque majority trade unions ELA and LAB. The political parties PP, PSE and Podemos-Euskadi did not support it, although the latter’s General Secretary Lander Martínez attended in a personal capacity. The Basque Nationalist Party PNV did not support it either (although members may well have done).

Also in attendance were Joan Tardà of the Catalan party ERC; Xabier Sánchez, brother of the jailed President of ANC, Jordi Sánchez; and the writer Kirmen Uribe.

Arnaldo Otegi for the EH Bildu party said the Spanish State should learn from the action of the French one; LAB’s General Secretary Garbiñe Aranburu declared that this year needs to be decisive in the Spanish state with regard to political prisoners and called for new alliances to achieve this. Adolfo Muñoz, Gen. Sec. of the largest trade union in the southern Basque Country, ELA, credited civil society with having achieved the change in French State policy, achieving the transfer of Basque political prisoners to jails near their homes, without waiting for the Spanish state to do likewise.

The banner at the head of the march stated “Elkarrekin aurrera egiteko prest gaude” (We are ready to advance together; human rights, resolution, peace) while, according to media report, throughout the march the following slogans were heard: “Euskal presoak etxera!” (Basque prisoners to home!) and “Presoak kalera, amnistía osoa!” (Prisoners to be free, total amnesty!).

At the end of the march, Sare’s manifesto calling for an end to the dispersal was read out by ETB (Basque TV channel) presenter Kike Amonarriz and Beatriz Talegón, ex-leader of the youth wing of the Spanish social-democratic unionist party the PSOE.

The great attendance in pouring rain is encouraging and once again the Basques show their high level of concern for their political prisoners, bringing at least 3% of their population out on a solidarity demonstration.

The reported (and audible on the video) slogans of “Euskal presoak etxera” (Basque prisoners to home) and “Presoak kalera, amnistía osoa” (Prisoners to be free, total amnesty) being shouted are interesting, given that the Abertzale Left leadership and organisations such as Sare have dropped such demands in recent years, concentrating instead on calling for an end to the dispersal policy and for the release of seriously-ill prisoners. The slogans mentioned above have been raised by the Amnistia Ta Askatasuna (ATA) organisation, whose supporters are highly critical of the changes in policy of the Abertzale Left leadership for some years now but presumably made their presence felt on the demonstration.

Despite the permanent ceasefire declaration of ETA a number of years ago and changes in the policies of the Abertzale Left leadership, the Spanish state has not given an inch, which leaves the leadership with no gains to show, not even the end of the dispersal policy. This policy, contravening human rights and the EU’s own conventions, sees prisoners located as far from the Basque Country as southern Spain, a drive of around nine hours there and the same back, on motorways that have already claimed the lives of a number of prisoners’ friends and relatives and injured an average of one a month.