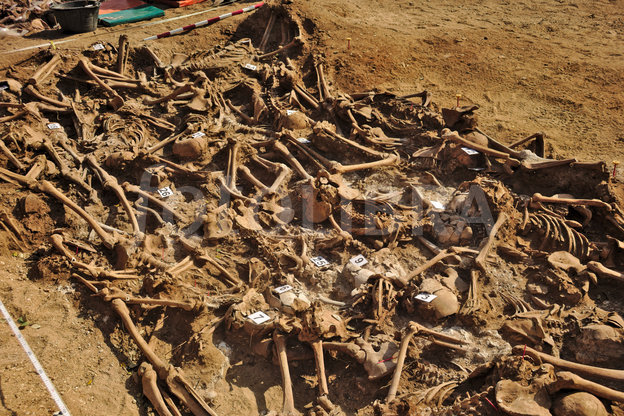 Report by RAÚL BOCANEGRA in Publico.es (translation and comment by Diarmuid Breatnach).

“The City Council of Seville has guaranteed on its own to provide the necessary funding — 1.2 million euros — to exhume the Pico Reja pit, in which historians believe that there are at least 1,103 bodies of of victims of the repression, led by the General Queipo de Llano, following the military coup of July 18, 1936.

This exhumation will be the largest ever to be undertaken in Spain, following that which that was carried out in Malaga, in the San Rafael Trench, between 2006 and 2009, and may indicate the path to take for the other capitals (of Spanish state regions – Trans).

The Mayor of Seville, Juan Espadas (PSOE), guaranteed that the grave will be exhumed throughout the mandate of the current Council. “It is a truly historic step in Seville and one of national importance, since it is perhaps the biggest mass grave that [at this moment] has a definite project for its exhumation,” the Councilor said at a press conference.

“And, therefore, it is also one of the most important projects in terms of Historical Memory to be undertaken in our land, due to the importance and volume of the Pico Reja mass grave. It was a commitment that this Government (i.e of the Andalusian region) gave during the past mandate to relatives and memorial groups and today it is made a reality with this tender,” added Espadas.

“Next Friday the City Council of Seville, through the Governing Board will approve the specifications and, therefore, the public tender for a technical service for the exhumation and genetic identification of the bodies of the Pico Reja mass grave, in the Cemetery of San Fernando,” reads a statement issued by the City Council. “The ultimate goal [of the exhumation] is to dignify the memory of the people who were thrown there, give them a dignified burial and attend to the requests of their families,” adds the Council (statement – Trans).”

BEGINNING AND COMPLETION OF WORK

“Accordingly, Espadas will not wait for the Council of Andalucía or the Regional Government to sign the agreement, to which they had committed themselves. Confirming now, at the start of the mandate, the works, the Mayor ensures that the exhumation will not be delayed and will be carried out throughout this term. Municipal sources assured Público of their belief that both the Council and the Andalusian Government will collaborate with the exhumation, the Andalusian Council not before September.

Should they contribute money, the amount would be deducted from the 1.2 million that the Council calculates as necessary to carry out the works. Espadas recalled that the signing of an agreement in this regard with the Board and the County Council to finance these works is still outstanding. “And let’s hope that it is signed as soon as possible.”

“This contract guarantees the beginning of the work and its conclusion, without waiting for the remaining public administrations –- provincial, Andalusian and national — to finalise their contributions,” reads the Council’s note.

Espadas and the Delegate for the Department for Equality, Education, Citizen Participation and District Coordination, Adela Castaño, related the details of this contract to relatives of the victims and to the different organisations involved in the area of Historical Memory in Seville. “Do not fear, the exhumation and the identification of bodies will be done,” the Mayor assured them.

The company that gains the contract must include at least one historian, five professionals in Forensic and Physical Anthropology, five in Archeology and 10 auxiliary support workers. “With the maximum guarantees of scientific rigor, a survey will be performed, material collected on the surface, excavations made in the pit, exhumations and recovering of bodies and remains,” says the City Council in the note. “Likewise, it must preserve and safeguard, also with all scientific guarantees, the samples of bone remains and biological samples taken from the family members until delivery to the University of Granada for genetic identification,” the City Council insists.

The project will be be completed in three phases, explained the Council. The first concerns the exhumation itself and the identification of the bodies, along with works including: the archaeological excavation; dealing with the remains found (the excavation and the direct and individualized identification of these bodies will determine whether or not they are relatives); exhumation (identification, recording of traces of violence and individual extraction of each body or remains); forensic anthropology (that is, determining sex, age, pathologies or anomalies); anthropological analysis in a laboratory manner; and conservation and protection to preserve these skeletal remains and DNA analysis.

The second phase will consist of the presentation of a final report as a logical contribution to the history of Franco’s repression. And the last phase will be the final destination of the remains.

The City Council will respect at all times the wishes of relations about the identified remains. The unidentified remains and those which the relatives wish to remain in the same place, “will be buried in an authorised space with appropriate technical indications for future identification”.

After finishing the works, “the area will be restored as an expository and explanatory site of the historical significance of the Pico Reja pit”. The successful bidder must submit a proposal for reconstruction of the current site that includes a columned monument to honor the victims.

According to official figures, 120,000 victims have been identified (not exhumed) from 2,591 unmarked graves around the Spanish state. The areas with the largest number of graves are Andalusia in the south and the northern regions of Aragón and Asturias – in Andalusia alone, 55,000.

A mapping work undertaken by the Council of Andalusia region, which was presented publicly in the regional capital in 2011, illustrates 614 mass graves in 359 Andalusian municipalities. Only around half of the 47,000 bodies that were discovered have been identified due to there being no relatives available for DNA tracing or because calcium oxide (quicklime) had been thrown over the bodies.1

“In Malaga province alone there are 76 mass graves in 52 towns, containing the remains of 7,471 people who were killed by General Franco’s forces. The largest of these mass graves was discovered in Malaga city’s San Rafael cemetery. 2,840 bodies were exhumed in early 2010, although more than 4,500 are registered as having been buried there”.2

The usual figure given for the total of non-combat killing by Franco’s forces is 150,000 and which does not include those who died of malnutrition and lack of adequate medical care in prisons and “penal battalions” or through confiscations, or economic and financial sanctions in areas occupied by his forces. Nor does it include the civilian victims of bombing by military-fascist air force, whether of cities or of refugee columns.

Against that, the total figure for non-combat killings by the forces against Franco are estimated at around 50,000. Also, while the latter killings for the most part took place in the early months of the military uprisings, before Republican Government control could be established, most of the non-combat killings by Franco’s forces were carried out after they had beaten the resistance and occupied the area and much of it also after the war was over. Typically too, according to Paul Preston (The Spanish Holocaust (2012), Harper Press), women were routinely raped before they were shot.3

The issue of the executed after a cursory military trial or simply taken out and murdered by Franco’s forces is a live one in the Spanish state today. Before Franco’s death it was not even possible to discuss it publicly and bereaved relatives were not permitted to mourn publicly – to hold a funeral or to have a mass said for their souls according to Catholic custom or even to mark their graves.

The Transition process to convert Franco’s Spain into a “democracy” accorded legal impunity to the perpetrators of even the worst atrocities during the Civil War but unofficially extended beyond, to the years afterwards and even to murders carried out during the “Transición” itself. And why not, when all the upper echelons of police, army, judiciary, civil service, Church, media and business were and are for the most part the same people as before — or their sons and daughters? When the Head of State and of the Armed Forces, the King Juan Carlos, was specifically chosen by Franco to be his successor and even after the Dictator’s death glorified him and his political trajectory.

The fascists and their descendants want the dead and their stories to stay buried and even when a very senior judge like Baltasar Garsón, who presided over the repression and torture of many Basque and Catalan political detainees (but is incredibly lauded as “a foremost human rights defender” by liberals!) decided to play a power and publicity game and and became a problem by authorising the opening of some mass graves in 2012, he was slapped with legal appeals, charges of wire-tapping and disbarred from office for 11 years.

The other graves they don’t want opened are the mausoleum of Franco himself and of Rivera, founder of the Spanish fascist Falange, who lie in the memorial park built by political prisoner slave labour to honour Dictatorship and Fascism, a shrine for fascists today. The order of the PSOE Government to exhume and transfer them to a family graveyard has been paralysed by the Spanish Supreme Court after protests by Franco’s descendants.

If the Pico Reja exhumation in Seville goes ahead and is properly documented, it will be as the PSOE-controlled Seville City Council says, of huge historical — but also of huge political – importance. Can this happen in the same region where the corrupt PSOE administration has lost power after decades without se

rious challenge and is now ruled by a de facto coalition of all the main parties descended from Franco, the Partido Popular, Ciudadanos and Vox? The Seville City Council says it can and that if necessary they will fund it all themselves. We can hope.