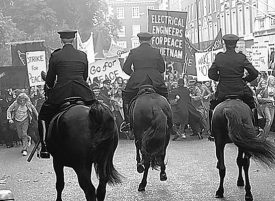 Mick Healy interviewed me about a number of my experiences in revolutionary work over the years and this is Part 1 (Part 2 will shortly be published), nearly all about some of my three decades in London. It contains a number of errors by me, for example the apartheid rugby team was South Africa’s one which were not called the “All Blacks”, that being New Zealand’s. Also I believe the giant Hunger Strikers solidarity march in London was to Michael Foot’s home, not Tony Benn’s. Still, here it is for what it’s worth with many thanks to Mick.

Diarmuid a long time political agitator was active in London from 1967, in interview part one, he talks about his involvement with Marxism-Leninism-Anarchism. His involvement in the Vietnam and Rhodesia solidarity campaigns, Anti-fascist mobilisation, solidarity Ireland, family squatting. In addition the campaign against the Prevention of Terrorism Act and the 1969 Peoples Democracy march from Belfast-Dublin.