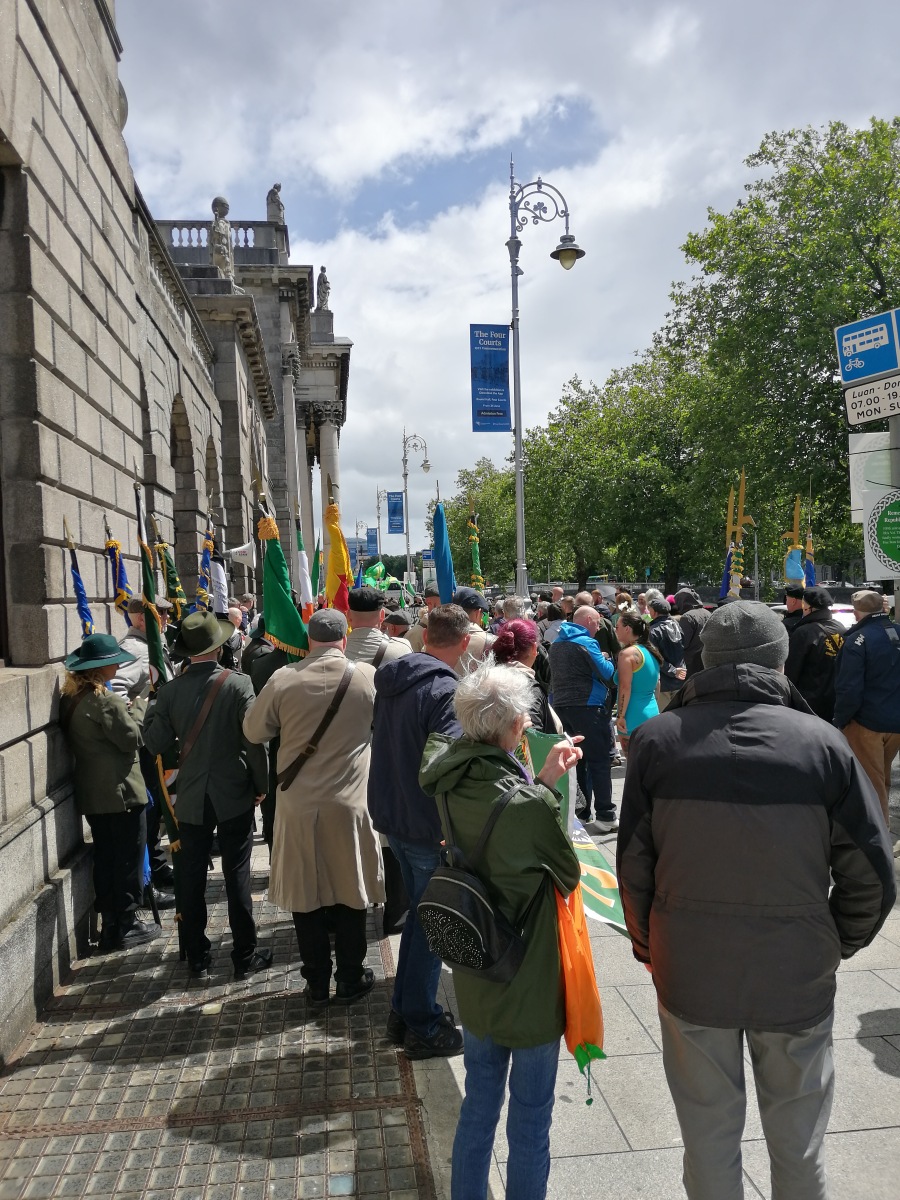 A crowd gathered in Dublin today to commemorate the Free State opening fire on the Four Courts on 28th June 1922, an event that began what is usually called “the Civil War” which lasted until 1923 (with State assassinations until 1924). The UK supplied the cannons and shells used by the Free State’s “National Army” along with munitions, including small arms and ammunition, armoured cars, army lorries and even coastal naval vessels. The conflict has also been called a “counterrevolution” and “the UK’s proxy war” with more Republicans executed by the new Irish State1 in that conflict than had been by the British State over the whole 1916-1921 period.

One hundred years ago this month, the IRA under the command of Rory O’Connor occupied and fortified the Four Courts complex, last occupied as a fighting post during the 1916 Rising. The Anglo-Irish Treaty partitioning the country and giving the Free State the status of a Dominion country had been narrowly accepted by the delegates to the First Dáil, the Irish Parliament previously banned by the UK State. However by far the majority of the military part of the Irish resistance – the IRA, Cumann na mBan and na Fianna, along with the remnants of the Irish Citizen Army – were opposed to the Treaty. The occupation of the Four Courts was seen by the Free State government as a challenge to its authority and by the British Government as a threat of anti-colonial struggle being renewed. Both parties were hostile to any radical republican, socialist or socialist-republican program.

On 28th June the Free State opened fire from British cannon on the Four Courts from Bridge Street on the south side of the river and the Civil War – or Counterrevolution – had begun. By the time the Republicans conceded defeat (and some assassinations continued even after it officially ended) perhaps around 1,300 had been killed. From January 1922 to April 1924, according to the Republican Roll of Honour, 426 anti-Treaty Volunteers had been killed, some 25 of these died fighting British and Northern Irish forces. Most anti-Treaty dead were IRA Volunteers, but some were Na Fianna members and four were women of Cumann na mBan2.

On the Free State side just under 800 died, of whom 488 fell in enemy action, others due to accidents or illness, while seven were executed having deserted to the Republican side. “To this total should be added a small number of police, including four from the Civic Guard (later renamed Garda Síochána), four from the Criminal Investigation Department and two from the Citizens’ Defence Force, who were killed from 1922-19243.”

Dorney remarks on omissions in the Last Post record and concludes: “Even allowing for this, though, the total of anti-Treaty IRA dead in the Civil War is not likely to be much more than about 500, of whom 81 died before Free State firing squads and more than 100 were summarily executed in reprisals.”

Many Irish Republicans also emigrated to avoid repression or because they were being denied employment.

The Irish State today is a direct descendant, legally and in other ways, of the Free State of 1922 and all periods since.

The commemorative event in Dublin today was organised by the National Graves Association (Cumann Uaigheanna na Laochra Gael), an organisation which since its founding in 1926 has been maintaining the graves of Irish patriots, arranging for the installation of gravestones, plaques and monuments and also organising commemorative events.

Before marching to the Four Courts, participants formed up in groups in the road outside Croppies’ Acre, a public park over a mass grave of victims of the English state’s repression of the United Irishmen and their supporters in 1798, now across the road from the Collins Barracks National Museum. They were led by a lone piper and colour party, followed by people in double ranks flying Starry Plough flags and carrying banners of history and conservation groups, along with some other flags, including that of Cumann na mBan.

At the rally outside the Liffeyside of the Four Courts, the organisers had an MC with number of speakers to read out the 1922 Proclamation, the lyrics of The Soldiers of Twenty-Two4 and Tim Horgan to give a keynote oration. At least one floral wreath was laid in honour of those who fought there and a number of posters attached to lampposts commemorated the three Volunteers who were fatally wounded there: Thomas Wall, Joe Considine and Sean Cusack.

It is almost certainly the case that it is the NGA which has erected the majority of patriotic struggle commemorative plaques around the country, with most of the remainder being organised by local authorities, local history groups and old comrades’ associations – a very small proportion being the work of the State. As stated on its website, the objectives of the Association have always been: to restore, where necessary, and maintain fittingly the graves and memorials of our patriot dead from every generation; to commemorate those who died in the cause of Irish freedom; to compile a record of such graves and memorials.

The NGA’s general alignment is unequivocal: “Only a 32 County Irish Republic represents the true aspiration of those who gave their lives for Irish freedom.5“

One might assume that every participant at the event today was of a definite political bent, yet not a single party or political organisation banner was to be seen on the march or at the rally. This is because participants were asked in advance not to bring any banners or placards of political organisational allegiance. As the Chairperson of the rally informed the audience, the NGA is not affiliated to any political party or organisation and furthermore does not accept contributions from any such nor from the State – in order to continue to guarantee the NGA’s independence. In fact, members of its governing body are not even permitted to belong to a political party. A senior Garda officer however, of least at Inspector rank, took down details in his notebook as the rally was addressed by speakers.

Patriots of the United Irishmen, the Young Irelanders, the Fenians, the Land League, na Fianna Éireann, Irish Volunteers, Cumann na mBan, IRA, Official and Provisional IRA, the Irish National Liberation Army etc have all been commemorated by the NGA. According to Wikipedia, since its founding, the NGA has erected, or accepted into its care, over 500 monuments and memorials throughout Ireland.

A number of other Civil War/ Counterrevolution commemorative and discussion events will be taking place at least during this year, two of which will take place next week (see photos of leaflet).

The Gardaí remained at the scene as people dispersed. Passing by again shortly afterwards, we found the floral wreath had been removed.

1Official executions are usually listed as 81 or 83, these having been subjected to some kind of military judicial process (but without any jury). However, apart from IRA fighters killed in battle, a number of captured combatants were murdered (such as those of the Ballyseedy Massacre on March 7th 1923) while known activists were assassinated by Garda-Army squads operating from Oriel House. Often, the murdered had been tortured first.

4https://www.youtube.com/watch?v=RKOSCuLtlAY for a rendition of this song. It author seems unknown.

Varadkar admitted those killed without trial had been murdered: https://www.thejournal.ie/free-state-executions-4387452-Dec2018/