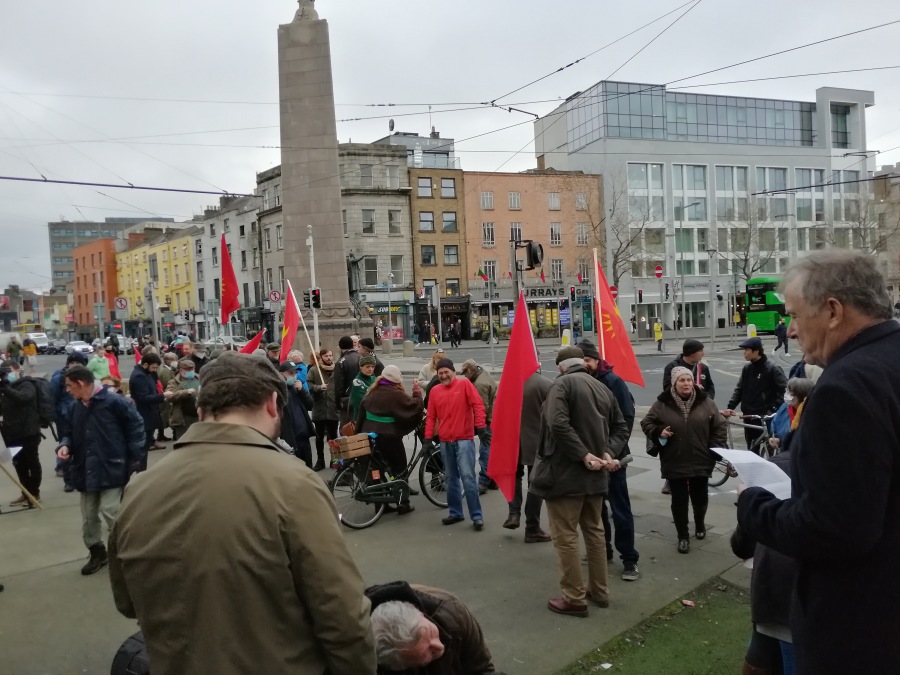 On Saturday 22nd January 2022 an event was held to commemorate the centenary year of the occupation of the Rotunda building in Dublin by 150 unemployed workers led by Liam Ó Flaithearta, a Republican and Communist and writer from Inis Mór (off the Galway Coast). The occupation took place two days after the formation of the Free State and was attacked by an anti-communist crowd while after a number of days the occupiers were forced out by the police force of the new state of the dismembered nation1. The event last week was organised by the Liam and Tom O’Flaherty Society.

The event began with a gathering at 1.30pm in North Great George’s Street, where the Manifesto had been printed in 1922.2 People then proceeded to the nearby Rotunda, site of the occupation in 1922.3

Seosamh Ó Cuaig from Cill Chiaráin, Carna, Conamara, opened the proceedings as Chairperson, ag cur fáilte roimh dhaoine i nGaeilge agus i mBéarla, briefly introducing the historical occasion and recounting how some companies, including Boland’s, had supplied bread, sugar and tea to the occupiers, before he introduced published historian and blogger Donal Fallon.

Fallon not only recounted the events of that occupation 100 years ago but also placed it in context of a number of other factors: the unemployment then in the State (30,000 in Dublin) and to follow through into the 1930s, the upsurge in workers’ occupations and local soviets, the reactionary nature of the government of the new state and of the hierarchy of the Catholic Church at the time, which was very supportive of the new regime and extremely hostile to any kind of socialism, along with the cultivation of a reactionary social and political attitude among sections of the population.

Fallon also commented on the censorship and otherwise neglect of Liam Ó Flaithearta as an accomplished modern Irish writer and hoped for his writing to become more popularised now.

Alan O’Brien, Dublin poet and dramatist, was welcomed on to the stage to read the Manifesto which had been issued at the time, copies of which were available at a nearby stall. One of the aspects of that document was a call for Dublin City Council to set up public works to provide paid employment for those out of work in exchange for services to the community.

Diarmuid Breatnach, singer and blogger was invited to the stage to sing “The Red Flag” because it had been sung there during the occupation. No doubt those in the Government, Church hierarchy and generally among reactionary people at that time would have been horrified by the lyrics and would have asserted that they were foreign to Irish culture and thinking. However, as Breatnach explained, the lyrics had been composed by an Irishman (see Appendix 1), Jim Connell from Meath. Connell wrote the lyrics to the air of The White Cockade and was appalled to hear it sung to the air of Oh Tannebaum, a Christmas carol. Breatnach had never heard it sung to the White Cockade air but had been practicing it for days and hoped he would be faithful to the original air.

Called by the Chairperson to sing a follow-up song, Breatnach sang most of the verses of “Be Moderate”, satirical lyrics published by James Connolly in 1907 in New York. There had been no air published for the song and it has been sung to a number of airs but he would sing it to the air of A Nation Once Again, which provides a chorus:

The event was later reported by RTÉ briefly in English on the Six O’Clock News and also by video on TG4’s Nuacht in Irish including interviews with Fallon an a number of participants.

After the Rotunda occupation was terminated, Liam Ó Flaithearta emigrated to London, which is where the Red Flag lyrics had been composed twenty-three years earlier. The lyrics were composed by Meath man Jim Connell in London in 1889 to the air of the Scottish Jacobite march The White Cockade — he was reported livid when he learned that it was being sung to the air of Oh Tannebaum, protesting: “Ye ruined me poem!”

Jim Connell was a Socialist Republican (he had taken the Fenian oath), activist and journalist who emigrated to England in 1875 after being blacklisted in Dublin for his efforts in unionising the docks in which he worked. Apparently he began to write the song lyrics on his way home from a demonstration in London city centre, on the train from Charing Cross to Honor Oak in SE London, where he lived and completed it in the house of a fellow Irishman and neighbour, Nicholas Donovan.

The lyrics have been sung by revolutionary and social-democratic (the latter less so now) activists all over the English-speaking world but also in some other languages in the years since.

Not mentioned in the Wikipedia entry on Jim Connell is the fact that he also wrote a book, apparently a best-seller in his time, called something like “The Poacher’s Handbook“. I’ve been looking for that book for years without success (DCC Library could find no reference to it).

Today there is a plaque on the two-storey house where Connell lived until his death in 1929, having been awarded the Red Star Medal by Lenin in 1922.

In the late 1980s a history archivist with the London Borough of Lewisham contacted the Lewisham branch of the Irish in Britain Representation Group, of which I was Secretary, to consult us about the erection of a history plaque on the house and the wording to use4. We attempted to have the words “Irish Republican” added to “Socialist” after his name on the plaque and were successful with “Irish” but not with “Republican”.

There was a handful at the unveiling at midday on a weekday, including a representative of the local Council, a couple from the Greater London Council including its Irish section, a trumpeter (who played the Oh Tannebaum air) and Gordon Brown (then just an MP). I believe this was 1989, the centenary of the song being written.

Brown’s speech did not mention Ireland once but as he finished, I jumped up on a nearby garden wall and while thanking those in attendance said that it was sad to see the country of Jim Connell’s birth omitted along with his views on Irish independence, particularly at a time when British troops were fighting to suppress a struggle for that independence.

This was during the age before mobile phones and I have no photos, sadly. So no big deal but the next edition of the Irish Post, a weekly paper for the Irish community in Britain, carried a report on the ceremony and my intervention. It was written by the columnist Dolan, who was the alter ego of the Editor, Brendan Mac Alua (long dead now) and a supporter of much of the IBRG’s activities.

I lived in Catford then, five minutes by bicycle from the site of the house and have photographed the plaque.

The words and sentiment “Let cowards flinch or traitors sneer” in the Red Flag mirror some in a song celebrating Irish political prisoners, The Felons of Our Land: “While traitors shame and foes defame” and “Let cowards mock and tyrants frown”. Arthur Forrester wrote that song 20 years before Connell’s and it would be surprising indeed had Connell not consciously or unconsciously borrowed the construction and sentiment.

Arthur Forrester was himself of great interest as were his poet sisters, both raised by their Irish nationalist mother, also very interesting person and poet in her own right, in Manchester, known to Michael Davitt. Arthur was a Fenian and did time in prison for it5. He was also for a period proof-reader for the Irish Times! Frank McNally wrote an article about the song but I don’t have access to anything except the first few lines.

Lyrics of The Red Flag:

1Not long afterwards, the new Free State’s National Army, under the orders of Michael Collins, attacked a protest occupation by Irish Republicans of the Four Courts which began the Civil War of the State against the IRA, lasting until 1923 with over 80 executions of Republicans by the State along with many kidnappings and assassinations (such as Harry Boland’s and of course others killed in battle (excluding the shooting of surrendered prisoners, which the National Army also did on occasion). Some were even murdered AFTER the war had ended, for example Noel Lemass, his body left in the Dublin mountains.

2Possibly this was the same location which had housed the James Connolly College (raided by the Auxiliaries in 1921).

3Also the location of the first public meeting to launch the Irish Volunteers in 1913 and where much of the GPO garrison and others were briefly kept prisoner after the surrender in nearby Moore Street in 1916. And just beside it the Parnell Monument, across the street the location of the founding of the Irish Ladies Land League (where members were arrested) and diagonally in SE direction, Tom Clarke’s tobacconist and newsagent shop (occupied by the British Army during the Rising).

4The Lewisham branch of the IBRG had been founded in 1986 and founded the Lewisham Irish Centre in 1992, I think. It was a very active branch in campaigning, community and political work, ceasing to exist around 2002. The IBRG itself was founded in 1981 and was active on many issues, including anti-Irish racism, representation for the diaspora, release of the framed Irish prisoners, British withdrawal from Ireland, against anti-Traveller racism, plastic bullets and strip-searches. It was also for equality in general, being against all racism, gender discrimination and homophobia and one year shared a march with the Broadwater Farm campaign.

5 Despite the Irish diaspora having given the working class in Britain its anthem (The Red Flag), its classic novel (The Ragged-Trousered Philanthropists) and, among many social and trade union activists and leaders, two leaders of the first genuine mass workers’ movement in Britain (the Chartists — O’Brien and O’Connor), and having fought against the Blackshirts at the Battle of Cable Street, there is no BA in Irish Studies alone available in British Universities. The Irish diaspora is also the first migrant community in Britain and for centuries the largest, has made significant contribution to the arts and a huge one to rock, punk and pop music. It would seem that the British ruling class does not want its population to know in any depth about the Irish.

The chorus of The Red Flag sung to the original air, i.e of The White Cockade: https://www.facebook.com/OFlahertySociety/videos/459751325864989

Jim Connell and The Red Flag

The Felons of Our Land song: https://www.irishtimes.com/opinion/the-felons-of-our-land-frank-mcnally-on-the-various-lives-of-a-republican-ballad-1.4185803